My Trip to the Leather Shop

No, not that kind of leather shop.

My search for leather scraps began at Fishman's Fabrics in Chicago.  I discovered this store shortly after moving to the neighborhood, and one of the things I loved about it (besides the buttons!) was all the leather they carry.  I was happy to have a source so nearby, and made a mental note of it.

Over the last several months, Fishman's has done a massive reorganization - honestly, things are so organized now, it's difficult for me to find what I'm looking for!  Nothing is where it used to be, so I asked one of the clerks about the leather.  Alas, they don't sell remnants any more, just full skins.  The ones I took a peak at were between $75 and $150, and twice as big as me!  Obviously a little more than I needed.  But when I told him what I was making, the clerk very kindly suggested I walk across the street and visit I. Sachs.  He even let me leave my car in their lot - almost unheard of in Chicago!

I. Sachs Sons is right next to Vogue Fabrics - I've walked and driven by probably hundreds of times.  But it never occurred to me to enter; I mistakenly thought it was wholesale only shoe-making supplies.  And it is mostly shoe-making supplies, but open to the public.  When I went in, I told the man at the counter what I was looking for, and he pointed out boxes and boxes of remnants and invited me to dig in, telling me that the remnants go for $5 a pound.  He also said I could go to another room upstairs and showed me how to get there.

As I was digging around and pulling pieces I liked, he came back over and said, "I was wrong - the scraps are $4 a pound!"  I spent about a half hour accumulating promising-looking scraps, then honed down my selection to six different pieces.

When I took them to the counter, another man was there, and I asked him to weigh them for me.  He held my pile in his hands and said, "Two and a half pounds."  Then he took them to the scale in the back; when he returned, he said, "It came in at three and a half pounds, but I'll give it to you for three pounds."  He rang me up and the total came to $13.78 with tax, and then he said, "You can just give me thirteen dollars!"  Incredible!  You can imagine my delight at getting enough leather for at least six bags for thirteen dollars!

Here are my spoils: 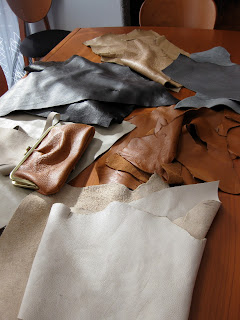 I was a little disappointed not to find any brightly-colored skins, but as you can see, I did find plenty that I liked.  (I was secretly hoping to find a gorgeous turquoise like Andrea's!  Or green.) I was drawn to the more supple, distressed leathers.  Here are some close-ups:

If you look closely at the first photo, you'll see that the caramel skin has already been transformed into a little clutch, about which more next time!
Posted by Gail at 7:00 AM