As expected, I've been super busy having fun times with Niecy-two.  But here and there, I've started working on a new project.

Next month I'll be taking her home to Turkey.  I always take a project to work on when I travel, and usually it's knitting.  But knitting in Turkey in August is not a fun activity.  There's no AC where we go, so even knitting with cotton and bamboo needles is unpleasant in the 95 - 100 degree heat.

This year I decided to take along some hand sewing.  I've been wanting to make an Alabama Chanin project for a couple years, and this presents the perfect opportunity!  So earlier in the month, I ordered Natalie Chanin's latest book, Alabama Studio Sewing + Design.  The book is beautifully done, chock full of information and inspiration, and even includes traceable patterns in the back to make the exact garments shown in the book! 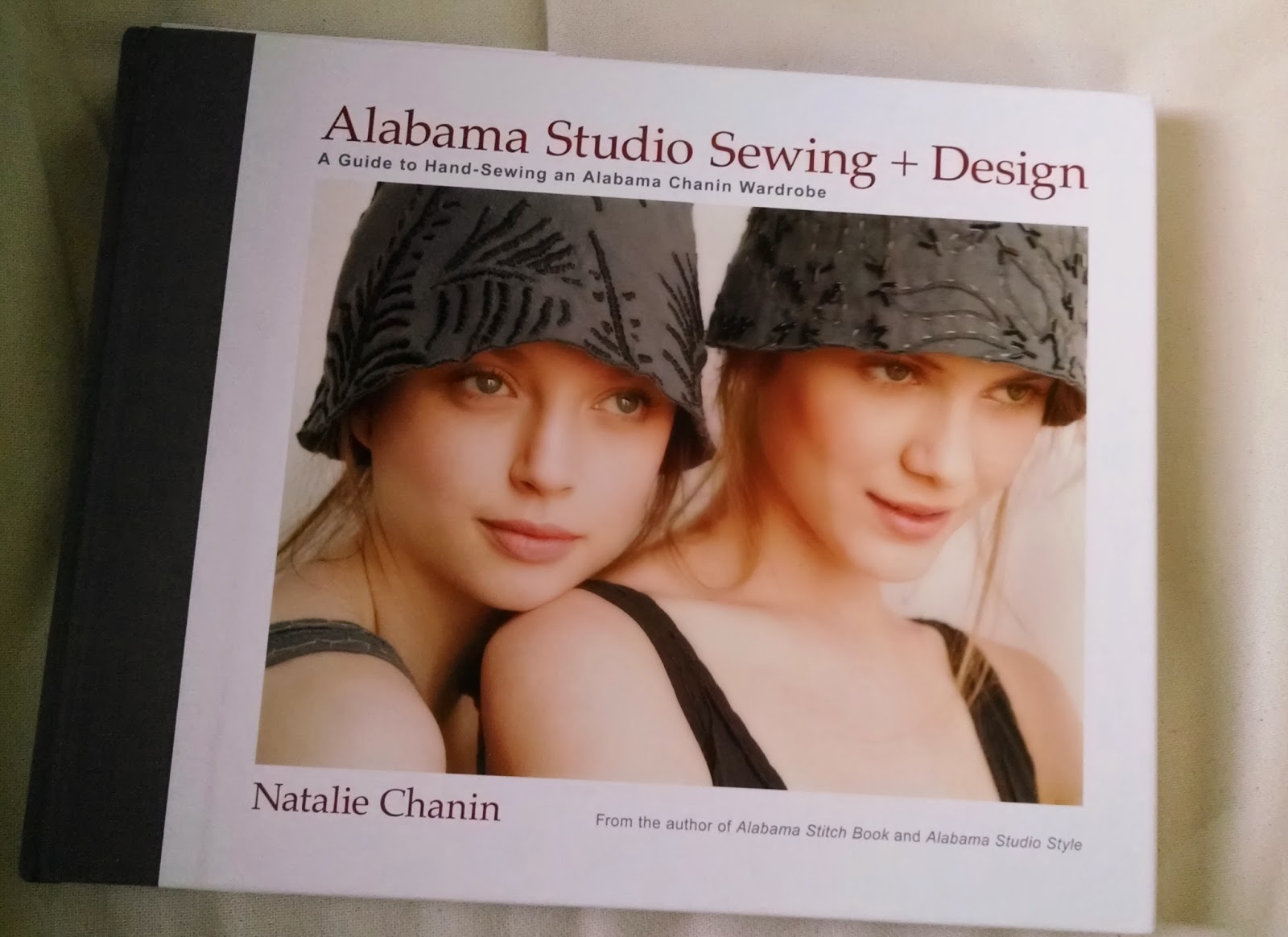 Over the couple days it took me to read the book, I thought about how I'd like to design my project.  I finally decided on using my already-traced Grainline Scout pattern to save time and because I was  sure of the fit.  I ordered some organic cotton jersey from Fabric.com (not linked because the colors I ordered are not in stock at the moment, but this fabric is easy to find from a variety of e-tailers).

The book includes photos of many of Alabama Chanin's stencil designs which you can enlarge and print out.  But I think the easiest way to get these images is to download them from the website, where many more designs than are included in this book are available as full-size PDFs.  I was able to choose the "poster" option on my printer to print out 9 tiled pages.  I trimmed the edges and taped them together just like you would a PDF pattern.  So easy! 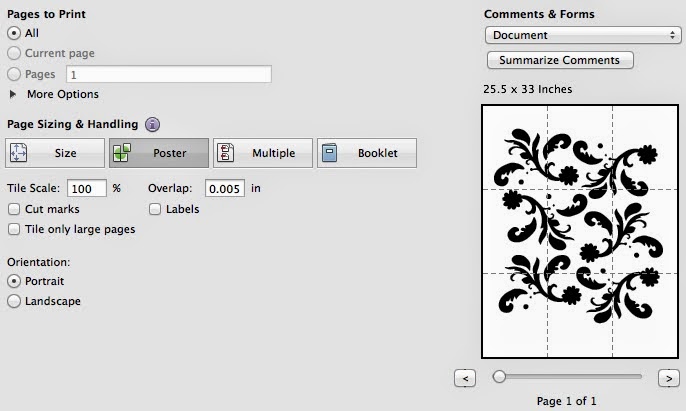 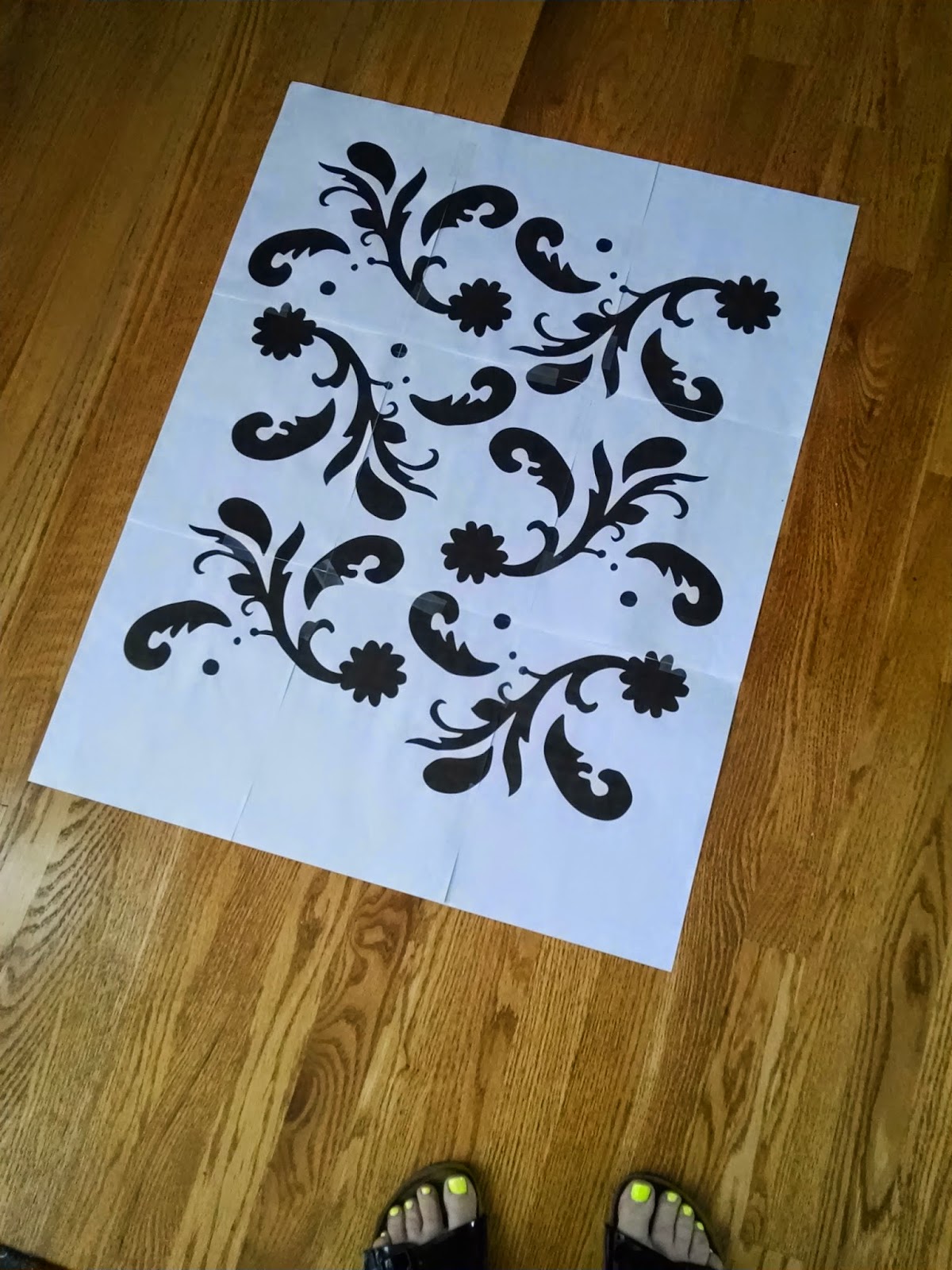 The next step was to get some mylar film and start cutting my stencil.  After some online searching, I found the perfect product:  Grafix Edge Stencil Film, which I purchased from my local Dick Blick.   The film is 40" wide and comes on a roll 12 feet long, so it's very easy to cut a large stencil all in one piece.  It's easy enough to cut but sturdy enough to make a durable stencil, even one with lots of detail work.

The book recommends applying your stencil pattern to the top of the mylar with spray adhesive, but I have a love/hate relationship with that stuff, so I only use it when absolutely necessary.  Instead, I taped my pattern under the mylar and it was fine - there was some static from the film that helped keep the paper in place, so I didn't get any shifting.

I've cut stencils before, and if you're doing anything with curves, the task is vastly easier using a swivel knife (shown at right, below) rather than a normal X-acto knife.  Cutting this huge stencil probably took me a total of an hour and a half, done over a couple of days. 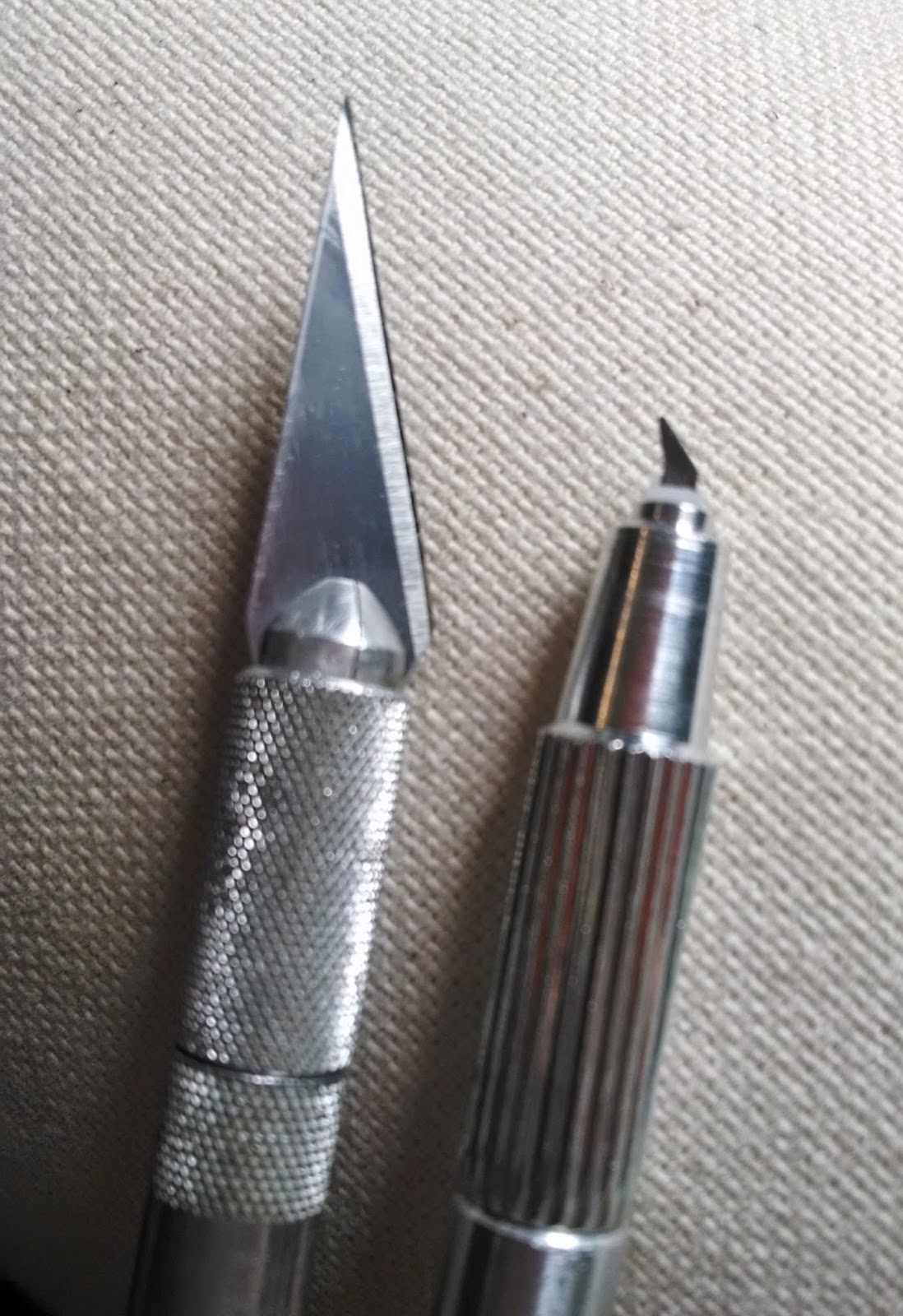 Once I had my stencil ready, I cut out my tee pattern.  The inner layer of my top will be white, and the outer layer cream, so I cut two tees. 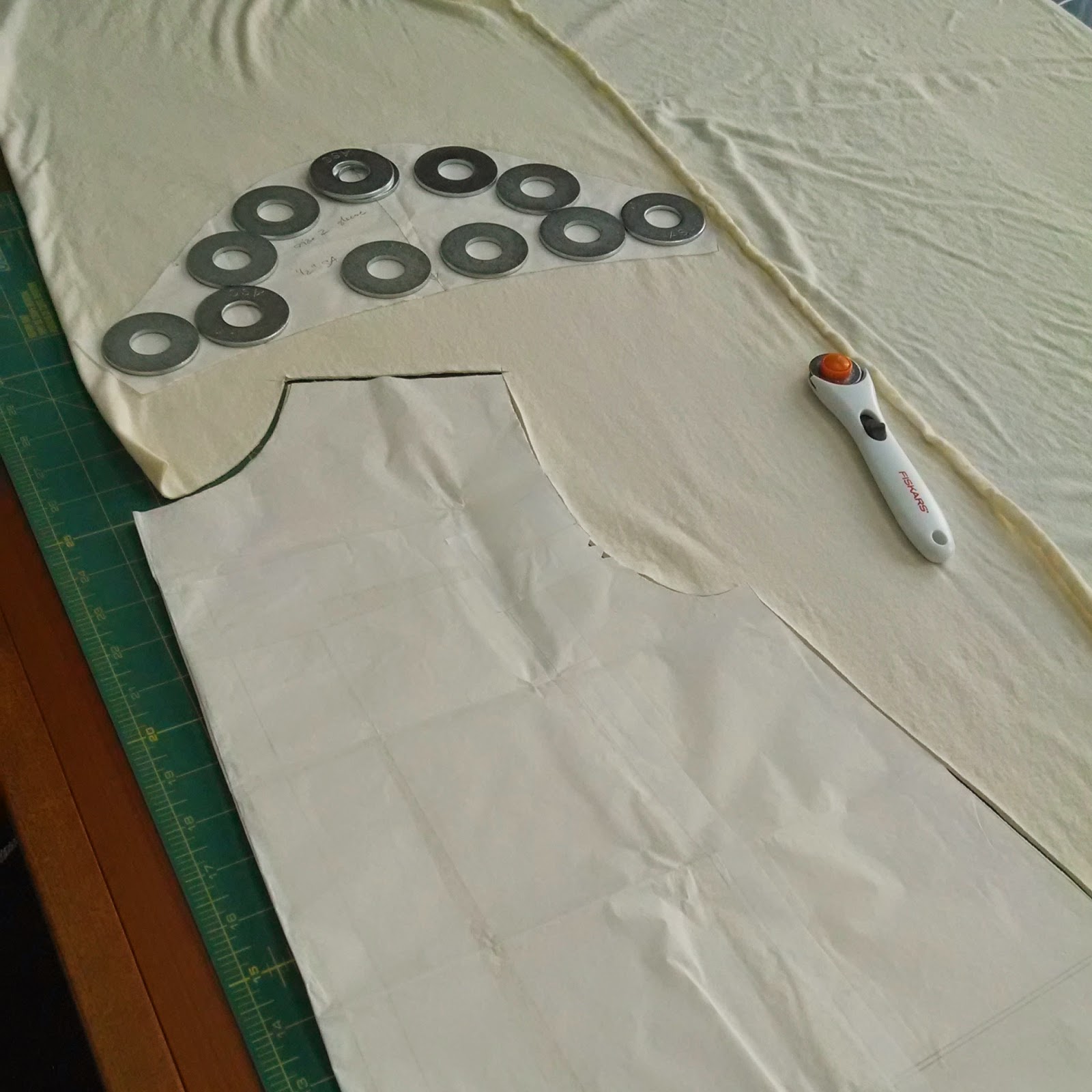 And then it was finally time to get out my paint and apply my stencil to the fabric.  So exciting!  While I was at Dick Blick, I picked up some Jacquard Textile Color in black and white, to mix grey.  I watered down my paint quite a bit, because I wanted to try out the spray-on method from the book.

Now, as I said, I've done stenciling on fabric before.  In the past I always applied the paint with a foam brush.  But the spray-on method sounded like it might be faster, and might give a more air-brushed look.  (I do actually have an airbrush and compressor, but didn't feel like digging it out.)

However, despite trying three different spray bottles, I just couldn't get it to work for me.  I wasn't able to spray lightly with the spray bottles the way I would be able to with an airbrush.  The excess paint pooled on top of the stencil, so I felt that if I tried to remove the fabric, I'd get drips. 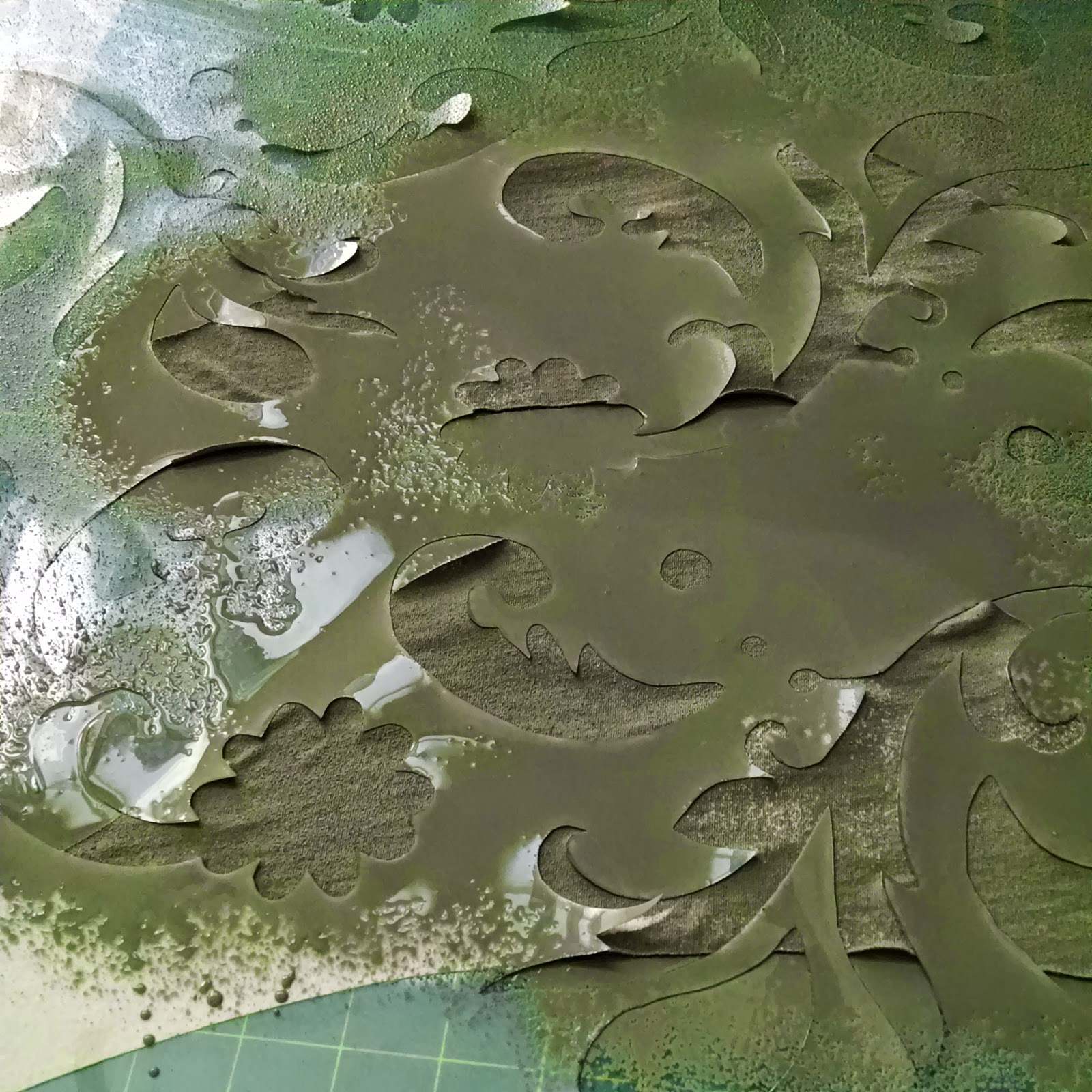 So I left it to dry for a while.  And that ended up causing problems too:  the very liquid paint was absorbed by the fabric and gave me fuzzy edges. 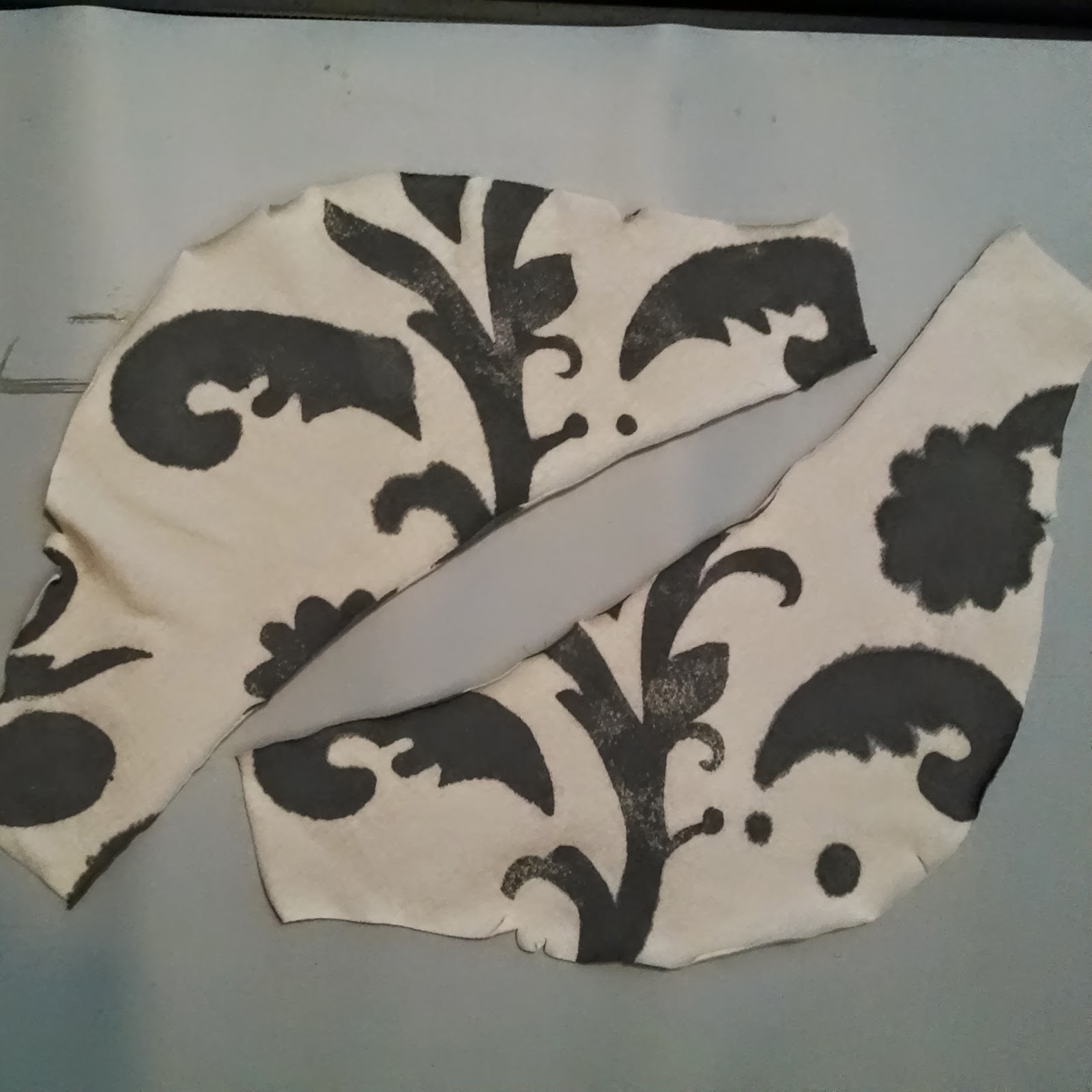 So I cut two new sleeves and tried it again, this time using the foam brush.  MUCH better!  In the photo below, you can see the difference:  nice crisp images on the top, and fuzzy bleeding on the bottom. 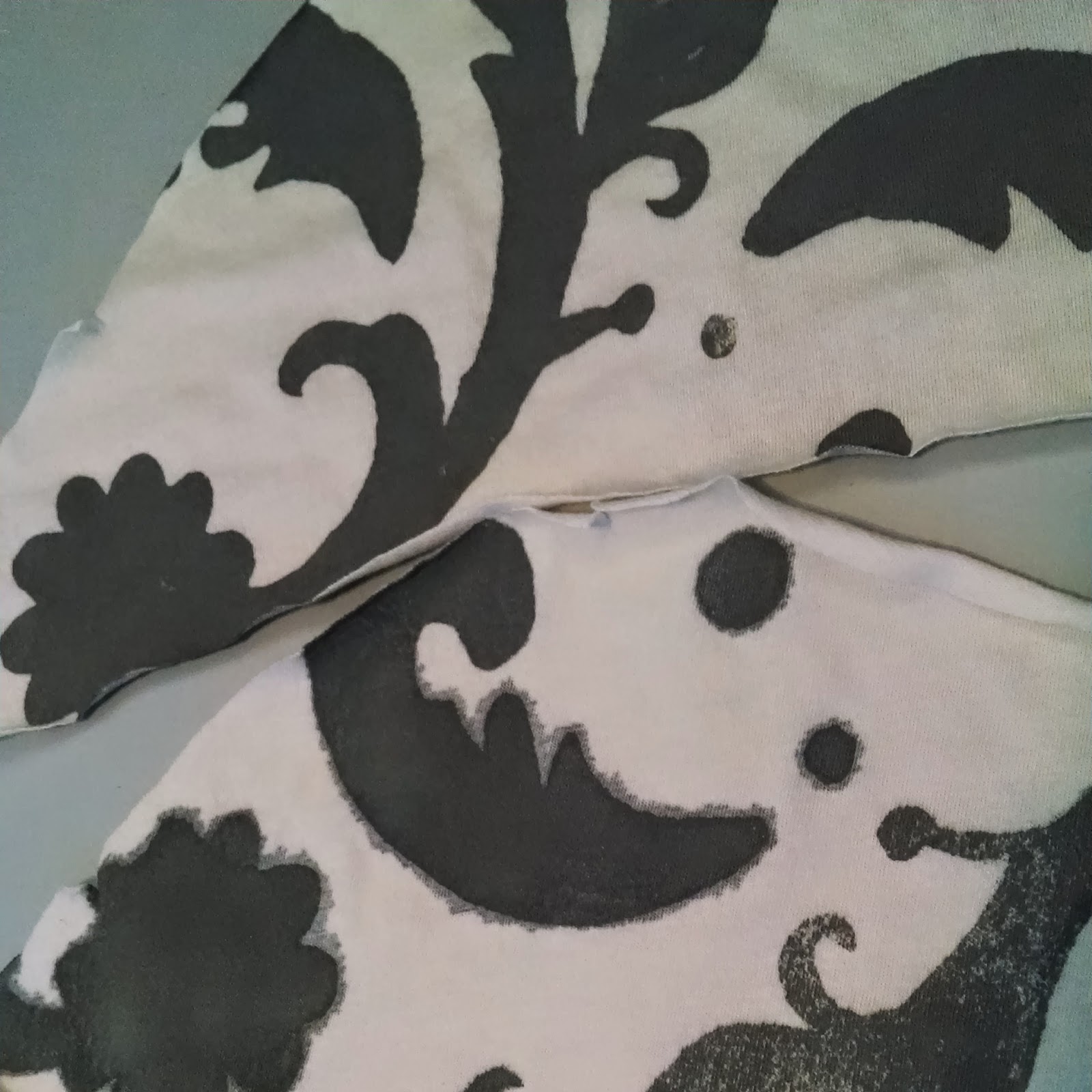 I was encouraged enough that I went ahead and stenciled the front tee piece with Niecy-two's help.  I found that what worked best for me was to lightly spray adhesive on the back of the stencil, then place my fabric face down on top of that.  After pressing it down smoothly, I flipped it over and made sure all the little pointy bits were firmly pressed onto the fabric, then sponged on the paint.  Because I was working on my floor, I cut a large piece of film to use as underlayment, and the stencil stuck to it!  So it was really great to have Niecy-two's extra pair of hands to hold the backing down while I lifted it all up after painting, and while I removed the stenciled fabric from the film.  And here is the result of our work: I had to stop here because I only have drying space for the front and two sleeves!  Once those are dry, I can set them aside and go ahead and stencil the back.  Then I'll be ready to heat-set the paint and baste the pieces together.  It's going to be hard not to start working on this immediately!

Waaaaaaay back, I promised to make a video with some tips on using the Brother 2340CV Coverstitch machine, because a few of you had bought one and were having some troubles.  Ooops!  I did get my machine out a few times since then, but it always seemed to be on dark, dreary days.

Yesterday I got it out for the first time in a long time, and it was sunny.  So I made a video showing how the machine works best for me.  If anybody else has any other tips, I'd love to hear them!  I'm not an expert by any means - my samples worked beautifully, but I managed to mess up the first hem I did right after!!

Busy times continue around here.  I've been scrambling to get a lot of my summer house maintenance done before July 10.  Why?  Because my niece will be visiting from Turkey!  Not Niecey-poo, who has come three times before; sadly she decided to spend the summer studying for an upcoming exam.  This time it's Niecy-two, her younger cousin who is 8 years old.  We're really looking forward to her visit and I want to have as much of my work done as possible so I can just enjoy my time with her :-)

I've felt like I haven't had much time for sewing or knitting, but somehow I managed to complete a shirt for Hubby and two more Emery dresses in the last week + one weekend!  Because my time is so limited, I'm lumping them all together in one post.  None of these are new patterns anyway - these makes are all about the fabric.

Here's Hubby's newest guitar shirt.  I saw this fabric in the Hawthorne Threads newsletter a couple weeks ago and immediately ordered some - cool guitar prints are hard to come by!  This is called "Guitars in White" by Timeless Treasures. 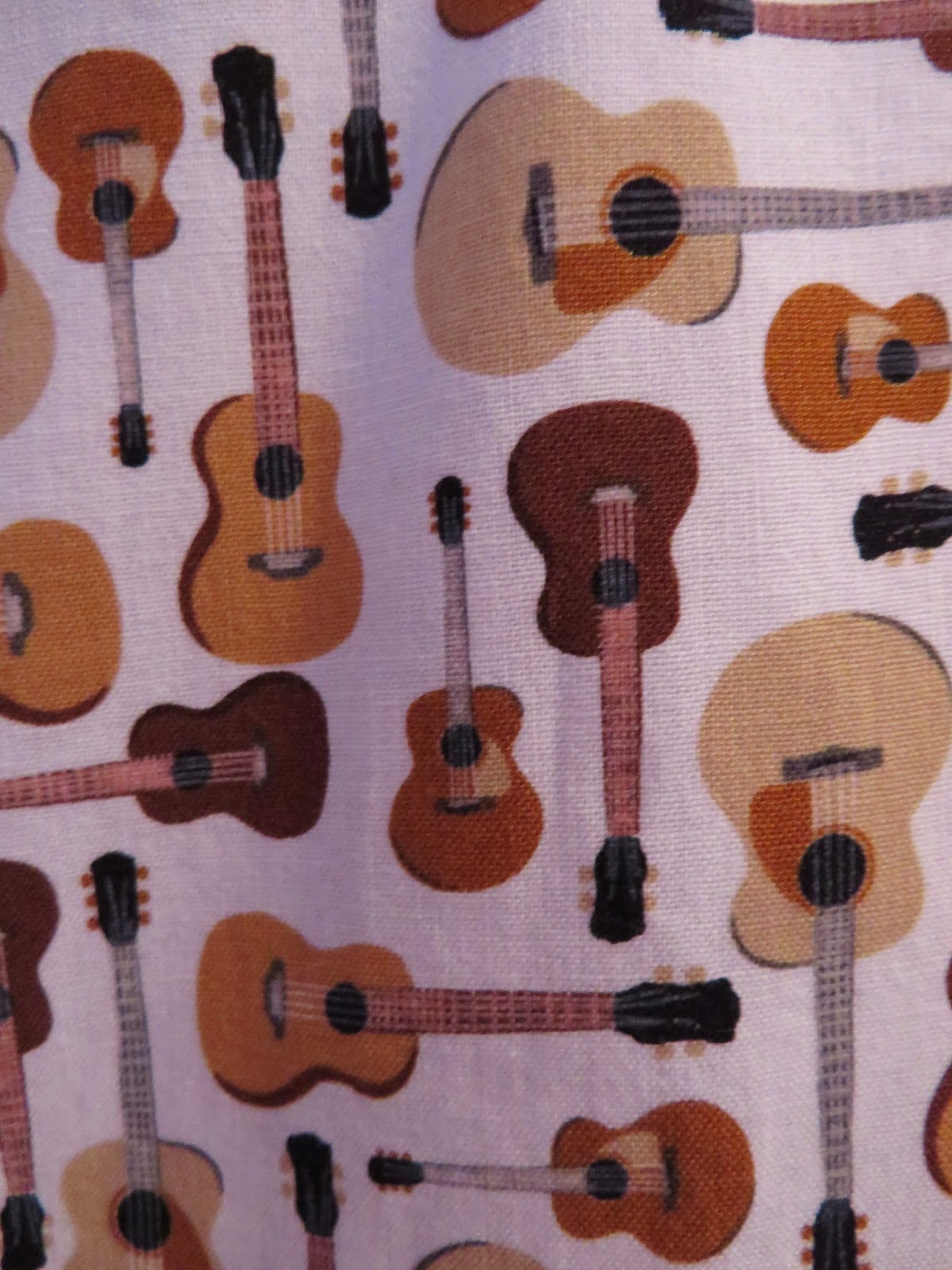 Hubby asked for a mandarin-collared shirt with pockets deep enough for his new phone.  He likes being able to have things made to his specifications!  The pattern I used is one I bought new in 1996 to make him his very first guitar shirt, McCall's 8409.  The style is quite oversized; I liked it in the previous versions I made, which were all dark colors, but with this light fabric I feel it overwhelms him a bit.  So I'm debating taking it in a little at the sides.  It does fit nicely across his shoulders, which are wide. 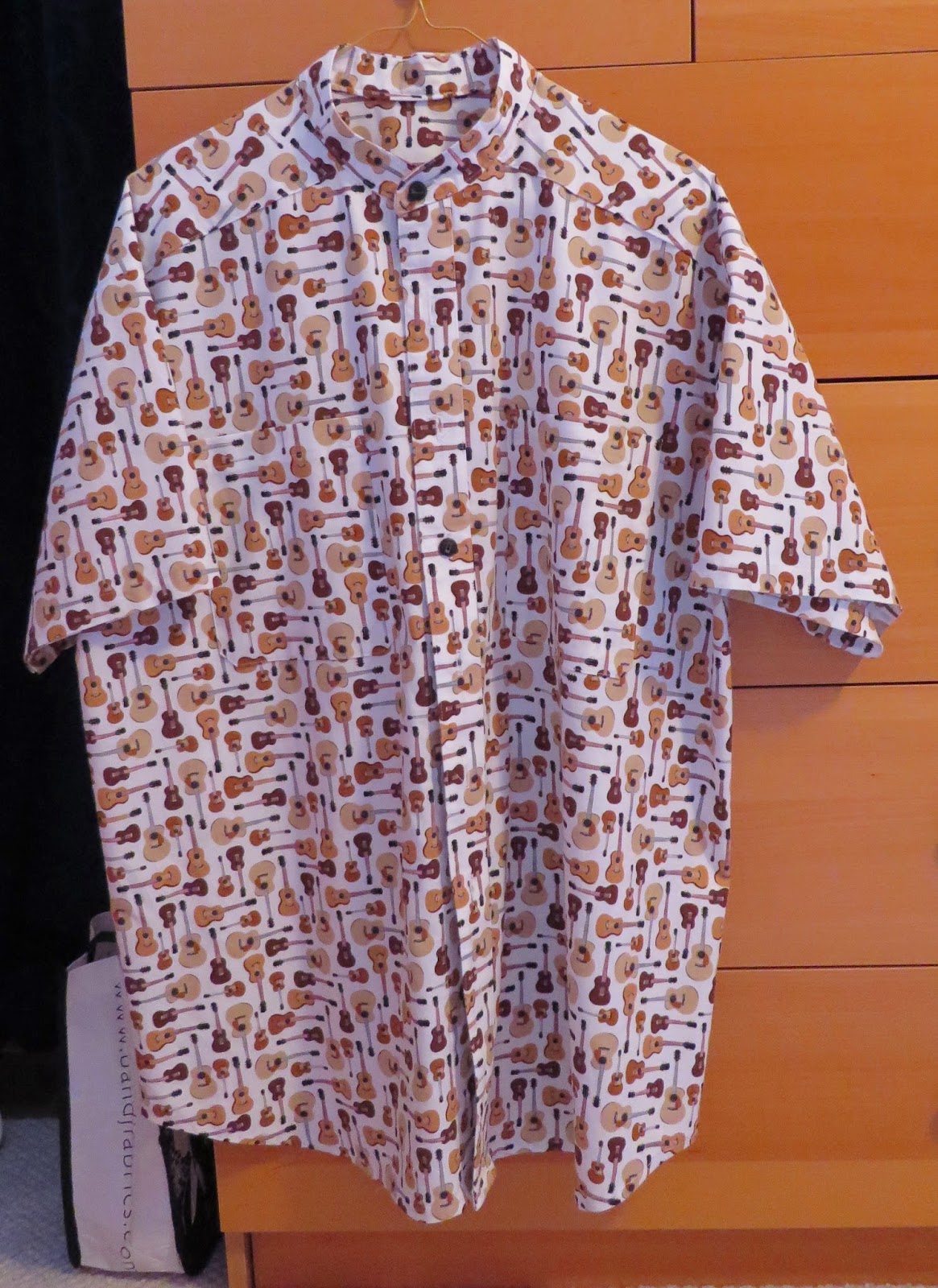 Going chronologically, here's my Tiki Winki Emery Dress, which I've already shown you (and not completed in the last week).  This one is actually my favorite so far in terms of colors that suit me.

Next I made up a version in a stash fabric I bought last fall in hopes of making a dress just like this.  I bought it from Fabricworm; it's from Moda and is called "Tickets" but I can't find it anywhere to link, so I have a feeling that by the time I bought it, it was already out of print. 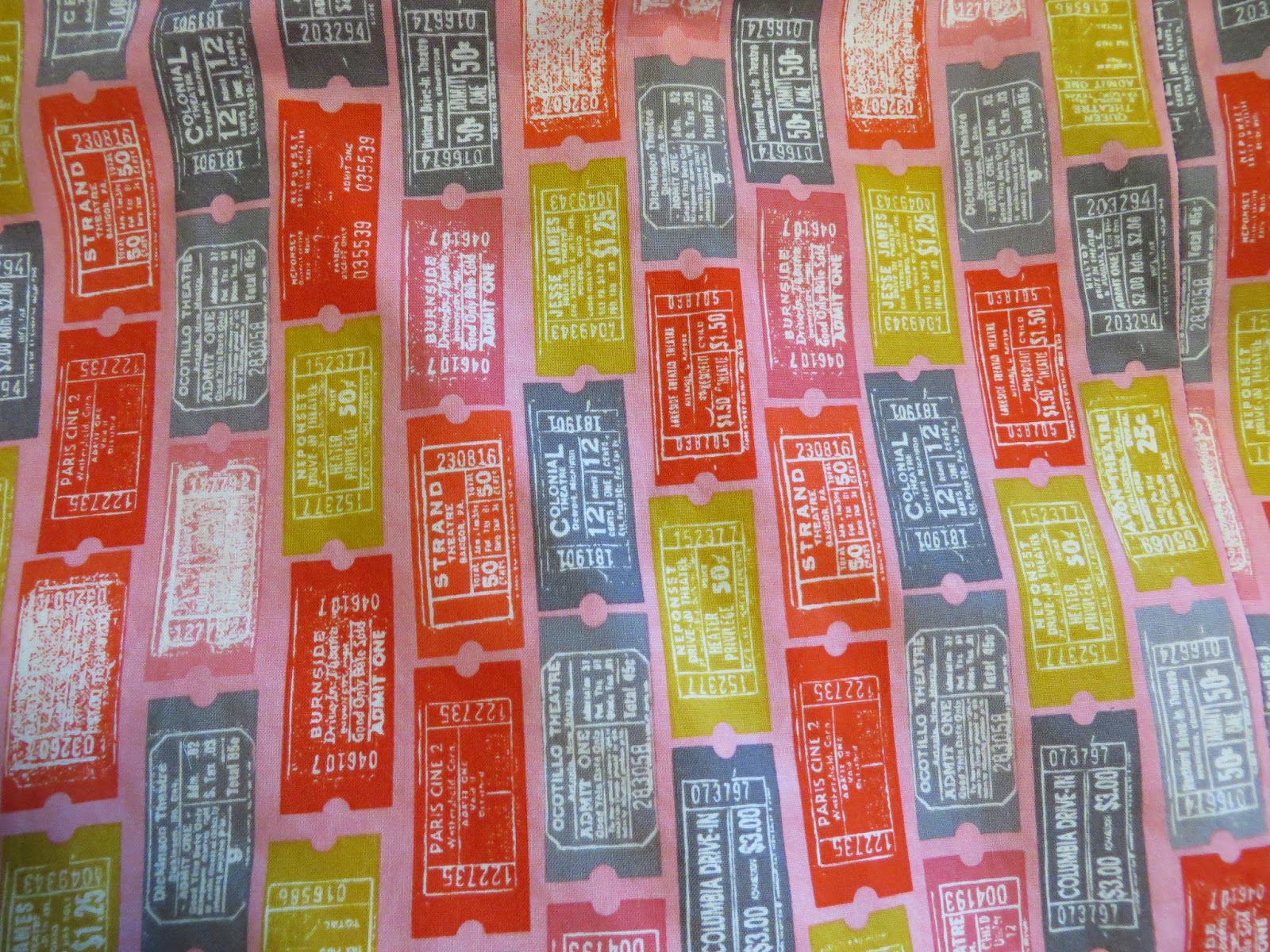 This dress is ironic because as much as I love the print, I actually rarely go to the movies!!  I've probably been to the movies 3 times in the 5 years we've lived in Chicago!  It's always too cold and too loud, and the chairs hurt my back.  I much prefer to watch at home :-)

I like the dress, but I don't love it as much as I was expecting to.  The fit is a little looser than I'd like.

I realized before my next version why my bodices were a bit on the loose side.  This is kind of embarrassing . . .

Ever since I got my Janome almost 2 years ago, I've been sewing with the needle on the default setting, assuming it was centered.  For some reason I decided to measure the needle position the other day and . . . it's not!  I have no idea why a machine's default wouldn't be the center position, but mine is actually one click to the right of center - giving me slightly narrower seam allowances and therefore slightly wider clothing.  Derrrrrrr.

So now I'm getting into the habit of centering my needle before I begin to sew.  I did it on this fourth Emery and I'm happier with the fit on this one than on any of the previous 3.  It's not actually noticeable in these pictures, in part because of the busy print, but I certainly notice it when I'm wearing the dresses.

So here's a confession.  All I want to sew or wear these days is Emery dresses.  The pattern is a great blank canvas for pretty prints, and it's easy to sew since I've got the fitting worked out.  Because I really only have another week of sewing time before my niece comes, and then likely none until September, I want to spend my time sewing things that aren't frustrating and that I know will be successful.  So I bought myself a few pieces of fabric in order to Emery to my heart's content.  This is one of those.  It's Michael Miller's "Point of Sail," which I bought from Fabric.com.  Every time I see this fabric online, the triangles are always pointing downward, which reads "bunting" to me.  I wanted it to read "sailboats," so I turned it the other way around for my dress. 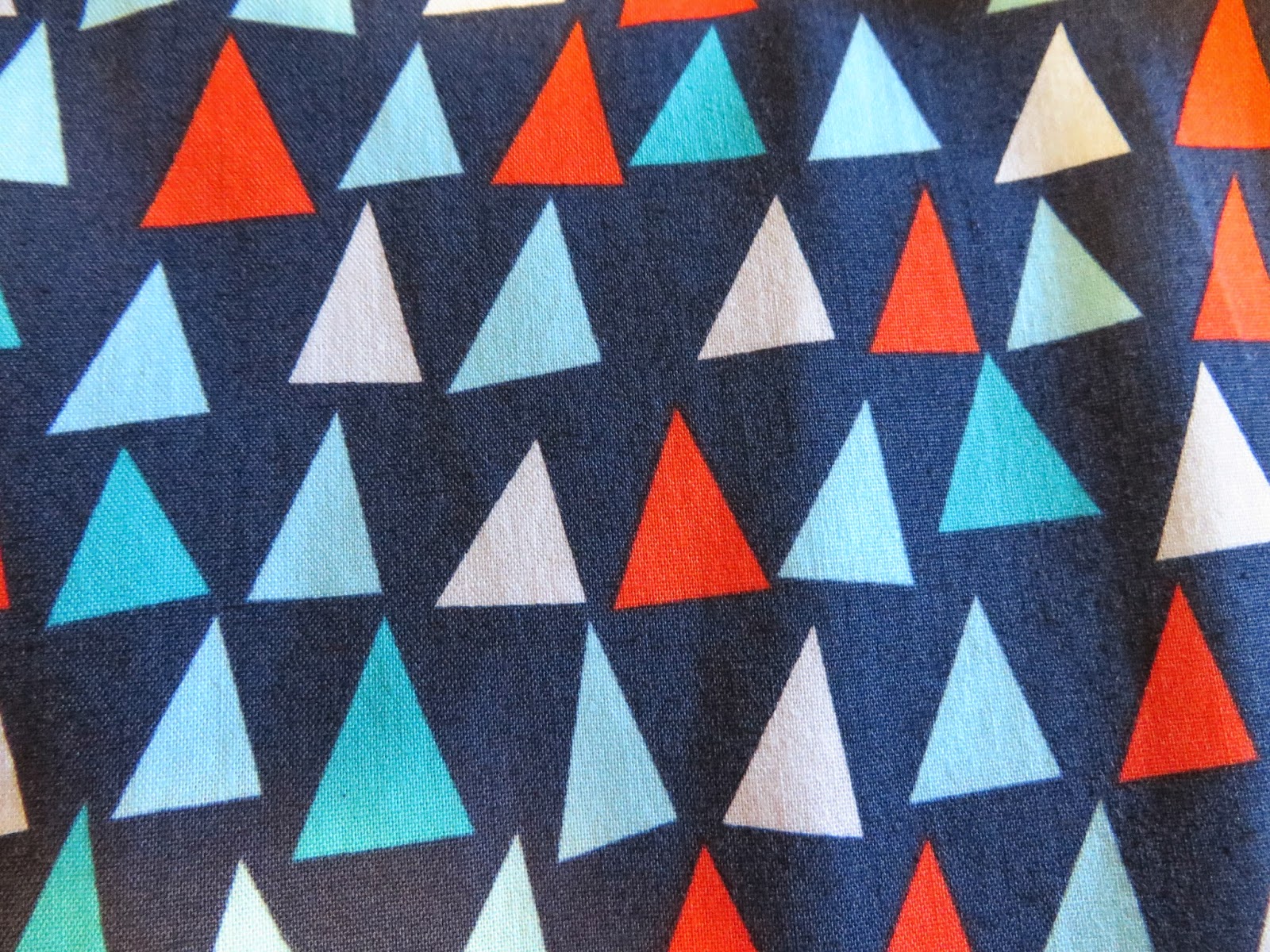 Emery #5 is already underway, and I'm hoping to get in a #6 before next week too.  Blogging is likely to be sparse from now until September while I enjoy family time :-)  But I will continue to do micro-blogging over on Instagram.  Well, I think I will but I tend to get caught up in the moment and forget to take pictures most of the time!
Posted by Gail at 9:33 AM 48 comments: