No sewing the last couple weeks, as I had another round of guests followed immediately by a trip out out town.  So this weekend, all I really wanted to do was sew.  And sew I did, although I got slightly derailed by life and ended up hurrying through this project.

The project in question is the Style Arc Dotty Blouse.  I've been fascinated by Style Arc for quite a while and have been wanting to try their patterns, so last month I pulled the trigger and purchased a few.  Here's how the paper pattern looks:  I really liked that it was accordion-folded - so much easier to put back into the envelope! 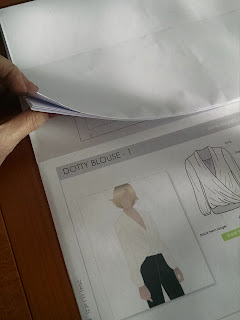 Because Style Arc patterns are purchased one size only (I got a size 8 for this top), I decided to make a (hopefully) wearable muslin with some super drapey rayon jersey.  The description says this pattern can be made in either woven or knit, and since I wasn't sure about the sizing, I thought knit would be a bit more forgiving as a test.  Sadly, the jersey wasn't a great quality, so although I intend to wear this top, I know it won't have a very long life; I had to unpick a couple areas and that left a few tiny holes. 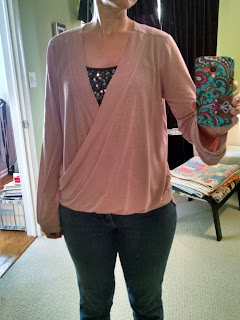 Compare my top with the line drawings on the pattern - there's not nearly as much volume in this blouse as the pattern would lead you to believe.  But I like it. However, I won't be able to love it until I make a few fitting adjustments.  Here's what I intend to do next time:

1.  Add 2" width at hip - no surprise, as my hip measurement puts me in a size 12
2.  Shorten the sleeves, and possibly even tighten the cuff and add a continuous placket and button
3.  Swayback adjustment - this will also take out some of the excess length in the back 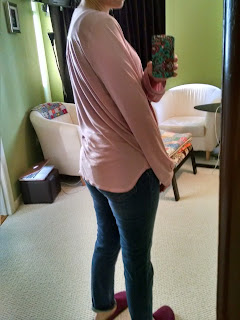 What surprised me is the adjustments I don't need:  I think that even in a woven, I'll be able to get away without doing a broad back or forward shoulder adjustment.  Pretty much unheard of for me.  That could be due to the fact that I bought a size 8, specifically to accomodate my back and shoulders.  My bust falls between the size 6 and the 8.

Style Arc pattern instructions are notoriously brief, and while I didn't really need them to construct this top, I tried to follow them anyway.  I didn't do the greatest job though, and I felt there were a couple things missing that gave me problems later.  So I'm glad I used this cheap fabric for my first go - I know what to do differently next time!

Most of my construction problems had to do with the front facing.  This facing is cut on with the front piece and folded back, then sewn into the shoulder and side seams.  What the directions neglect to say (and maybe I should have known by default to do) is to finish the facing edge at 3/8" before doing anything else.  I didn't realize my error until it was too late, so I ended up fusing my unfinished edge to the top - not a huge deal since it's jersey, but I'll definitely want to do it right the next time.  Also, having that excess 3/8" of facing at the bottom side seam  meant that it showed at the hem on one side.  That's the seam I had to unpick and do again, resulting in some small holes in my jersey.  I trimmed as much of the excess facing as I could, then sewed the seam with a slightly wider allowance to cover it up.

The yoke is attached burrito-style, but after that things get a bit vague.  If I'd followed the instructions (such as they are) I would have ended up with an unfinished shoulder seam, like this: 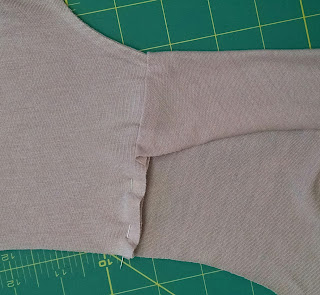 Yuck.  Instead, I kept my facing folded onto the front, then wrapped the yoke shoulder seams around it, inside out (so that the right sides of the yoke are facing each other, with the front sandwiched in between).  This gave me a MUCH neater finish: 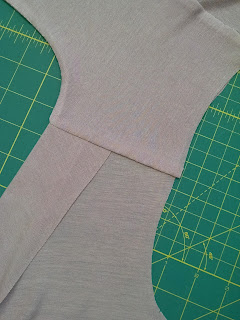 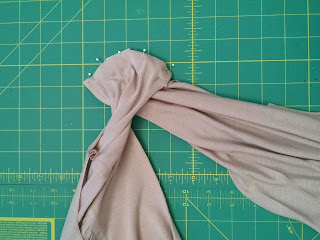 Another problem I had was trying to make gathers in the 3/8" seam allowance.  I could only fit 1 row of gathering stitches in such a narrow space.  It worked OK for the back: 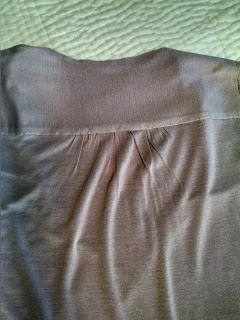 But absolutely failed at the sleeve cuff: 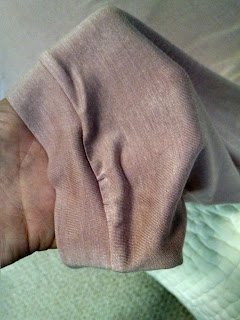 So next time I'm likely to convert any seam allowances that need gathering to 5/8".  I may even convert all the allowances, since the future versions I have planned are all silk and would benefit from French seams.

As I mentioned above, the sleeves are way too long on me - no surprise there, as I usually have to shorten sleeves 1" - 2".  Because of that failed cuff above, and because this is a test garment, my fix was to cut off the cuff, turn the sleeve back a few times and tack it in place.  Good enough for this version. 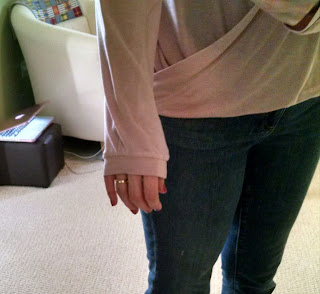 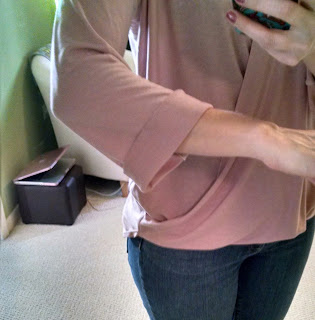 I think the line drawing is inaccurate regarding the placement of the shoulder seam.  Even on my very forward shoulders, the yoke wraps to the front instead of sitting on top of the shoulder, and this is backed up by how the top lays flat: 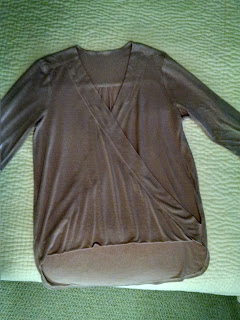 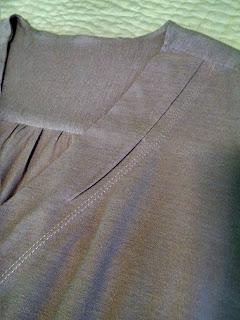 (I guess this is a good time to apologize for the poor quality of the pictures.  I had to make a choice between taking the photos with my phone, or waiting who knows how long to write up this post, so I chose the phone.)

You can also see in the photo above that I coverstitched my facing down.  I'm not in love with how it looks - it's too close to the tuck and just looks superfluous.  I think I won't need to sew it down in my future versions because the facing edge will be finished, but I didn't trust the fusible web to hold up in the wash.

Finally, just for the sake of novely, here's how that front piece looks: 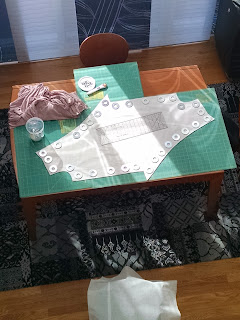 It's so large that I had to tape all 3 of my cutting boards together to cut it out!  So I was surprised that the top doesn't have a whole lot of volume when it's on the body.

I realize this post is rambling, but I did want to get my impressions of my first Style Arc pattern down in writing before I forgot!  And although there were a couple things I didn't like, my overall impression is that this is a solid pattern, and I'm looking forward to making it again with my adjustments.
Posted by Gail at 2:58 PM 15 comments: