Ways to wear a lavender blazer.

Once spring comes, that is.

Here are some looks I put together on Polyvore using items similar to (or in some cases, the same as) things in my closet. 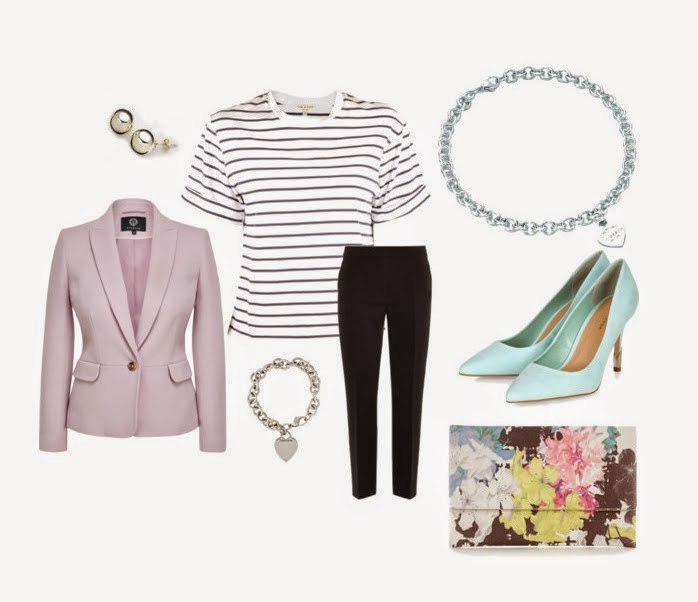 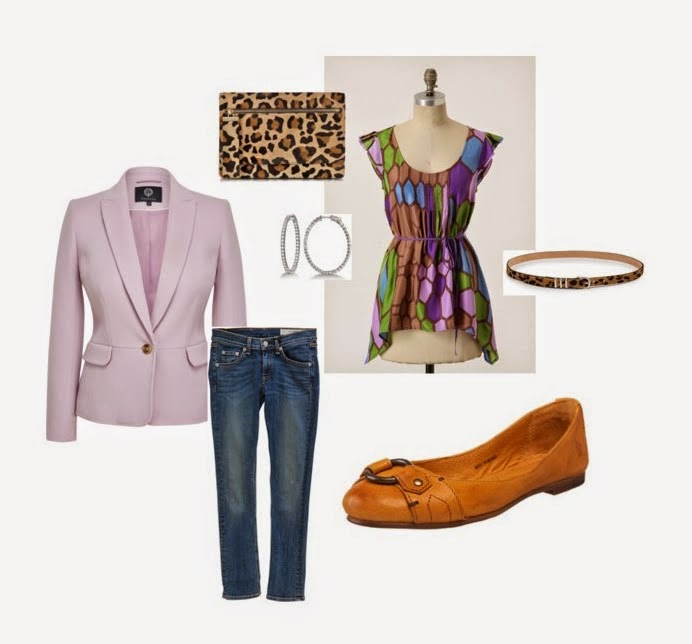 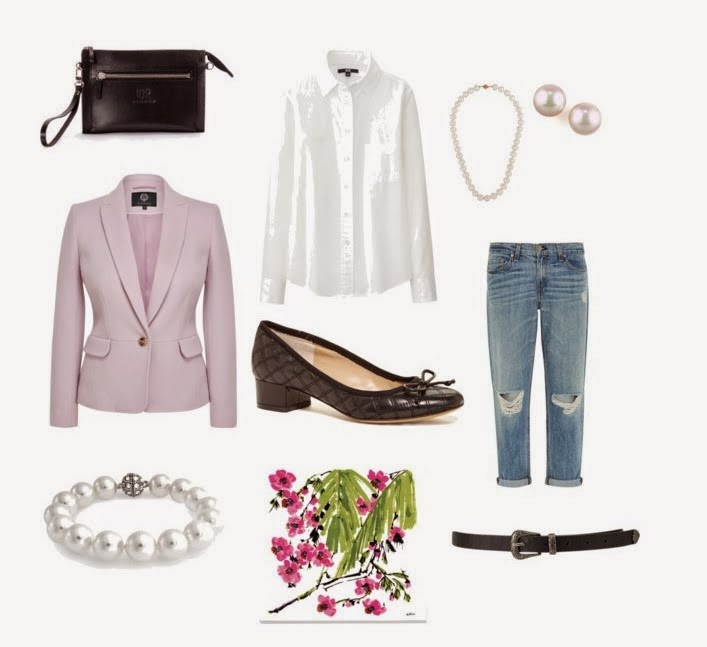 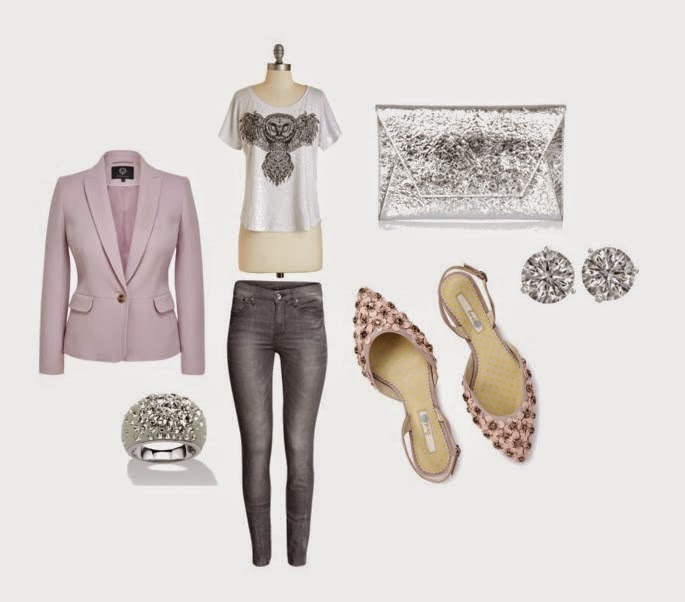 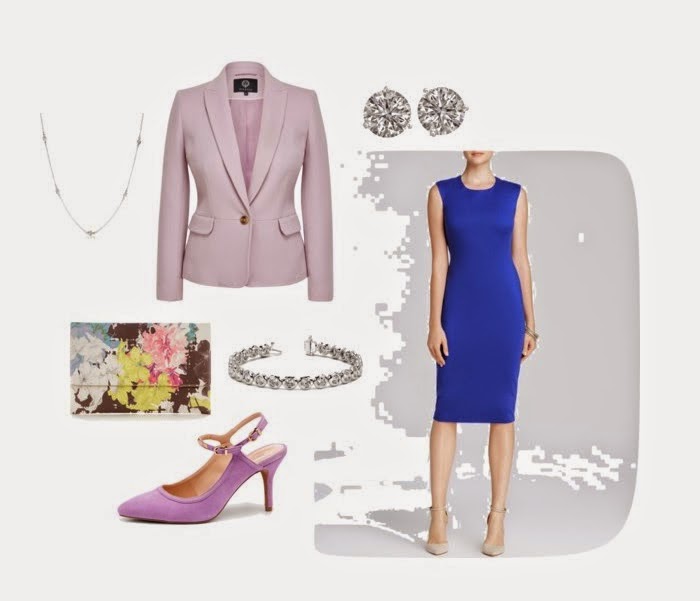 Wow, that was SO much easier than putting it all on and taking pictures!!

ETA:  Since publishing this post, I've created even more sets!  You can see them on Pinterest here, or on Polyvore here.
Posted by Gail at 6:30 AM 19 comments:

Since my last post, I've been busy making 2 blazers.  My friend Shar jokingly told me that I'm on the "Blazer a Month" program after I shared my sewing plans with her, and she's not far wrong!  I've got several more planned.  Although I'm not quite sure I need a dozen in my closet - that's probably overkill for a housewife!  But they are just so darn fun to make - most of the time. 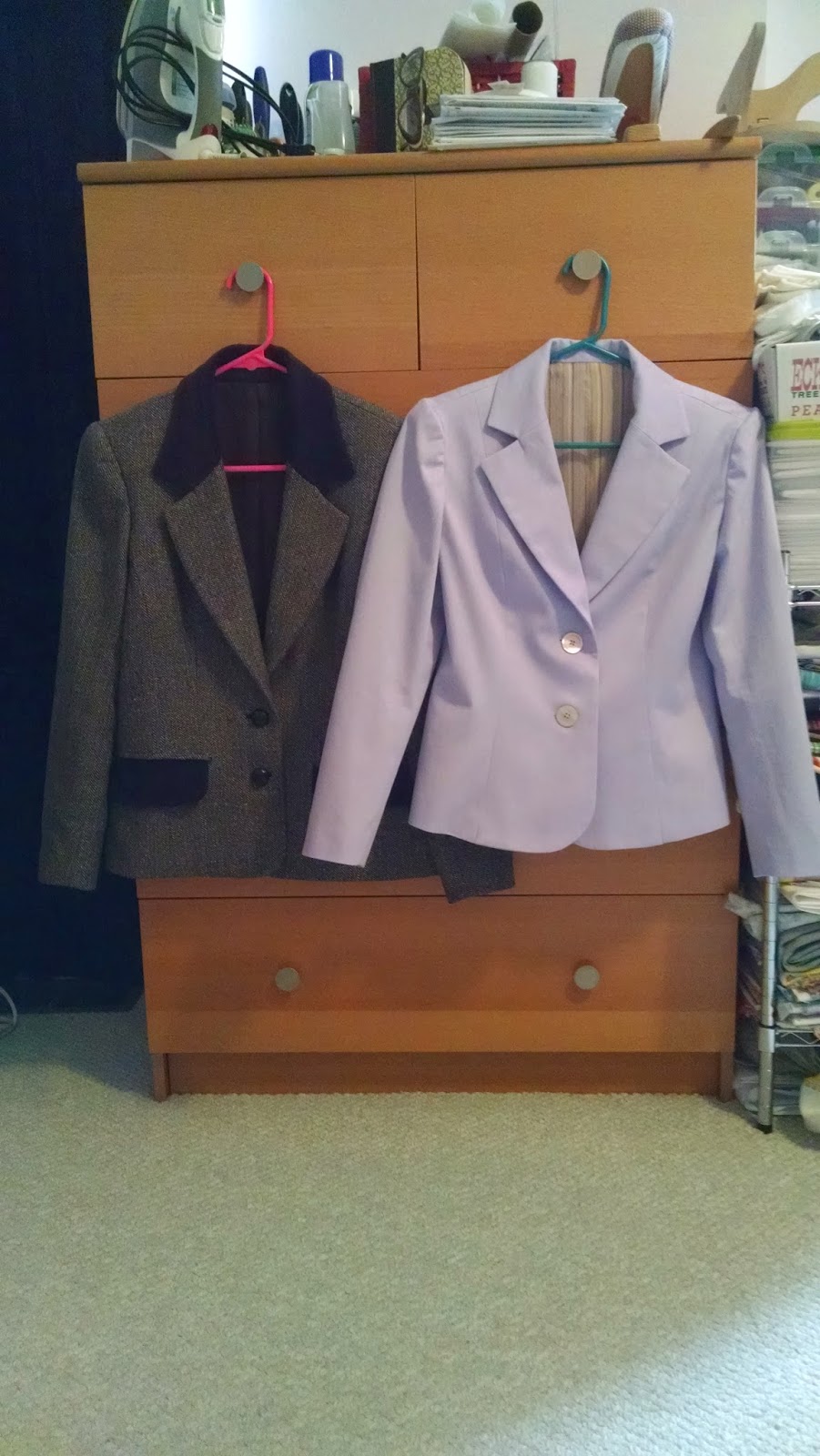 I started the new year with a second, and very successful, version of McCall's 6172.  This second blazer was hand-tailored.  Gosh, was that a blast!  (Obviously, you have to love hand stitching to find that fun, which I do.)  And the result was a jacket that is so perfectly molded to my body, it just feels like a dream every time I slip it on.  I posted several pictures in-progress on Instagram, as well as pictures of the finished jacket.  Alas, although I've worn it a few times, I have yet to remember to take a picture of myself wearing it!  One of these days . . . 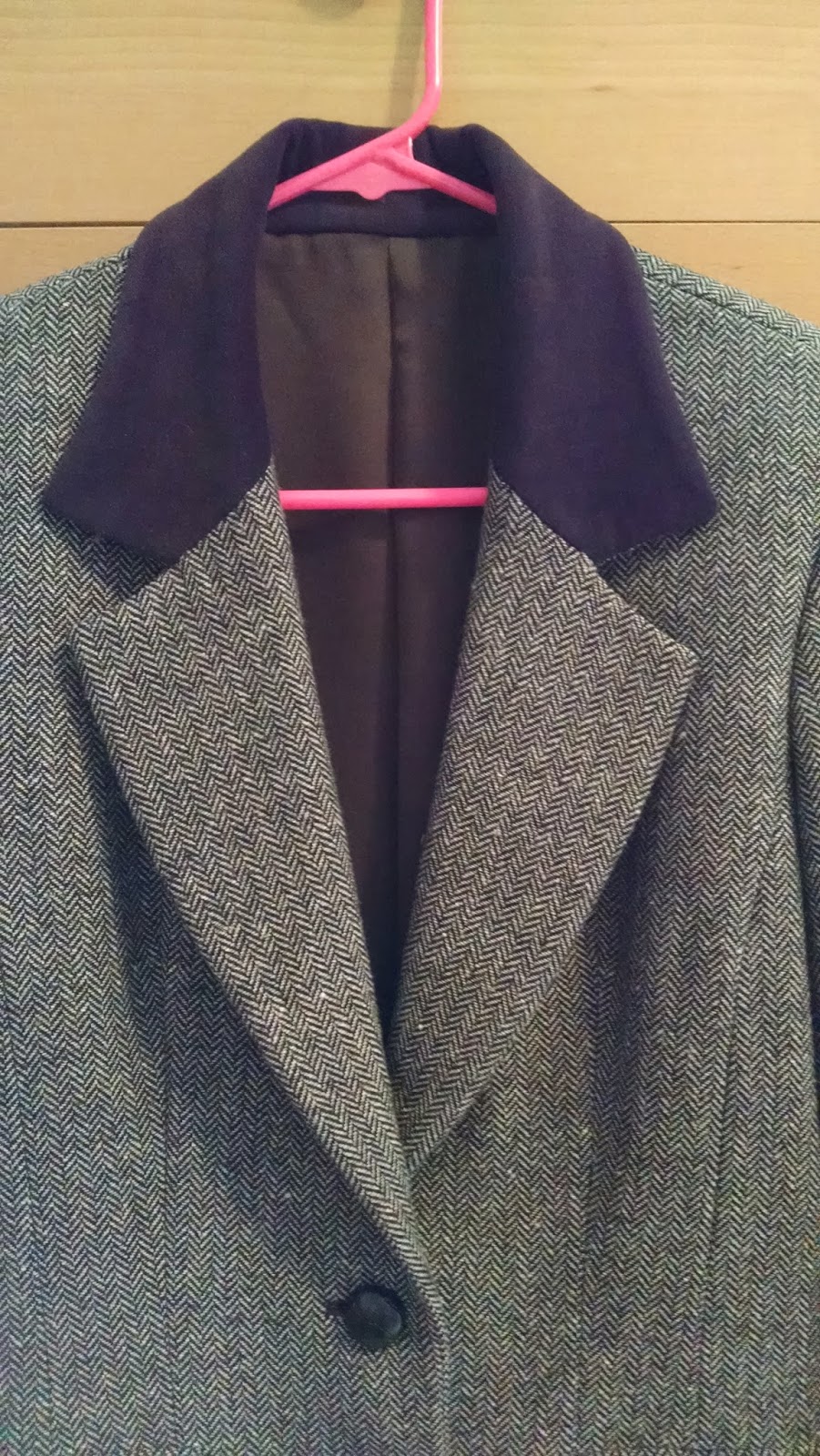 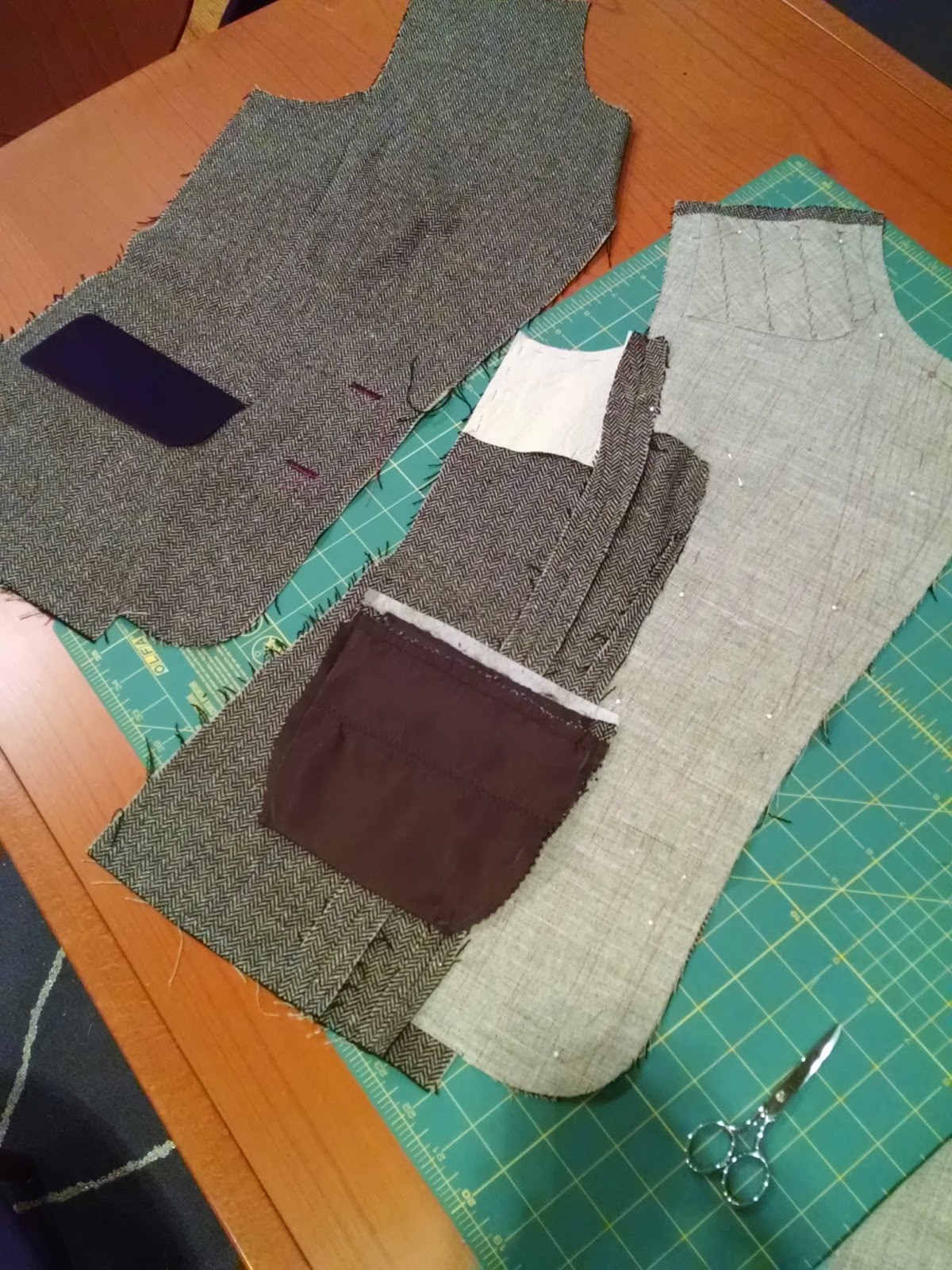 This month, I moved on to Simplicity 2446, one of the Amazing Fit patterns.  Back in September, when I was getting ready for Bourbon and Blazers, I pulled out all my blazer patterns - I've accumulated quite a few thanks to those $1 pattern sales.  After perusing all of them, I narrowed my choices down to M6172 and S2446.  Style-wise, they're pretty similar.  I ended up starting with the McCall's pattern, mostly because it uses the Palmer-Pletsch fitting method with which I'm already very familiar.

But I wanted to try them both, so I kept the Simplicity pattern out.  And in December, I ended up buying 2 kits for this blazer from Craftsy, for a whopping $25 each.  A pretty good deal, as the kit contains the pattern, the outer fabric and the lining.  I purchased the lavender kit still available here, and the navy blue shown in the pictures.  I resolved that these 2 would be my February and March blazers this year.

I finished up my lavender blazer the other day, and while it's OK, it is nowhere near as fabulous nor as comfortable as my McCall's blazers.  This pattern just doesn't work for me, and I won't likely be making it again.  It confused me, honestly, because just about every review I've seen of this pattern has been overwhelmingly positive.  Maybe I'm just nitpicking?  But I figure:  I have a pattern that is perfect for me, so I really don't need to settle for second best.  I tried it; it's OK; I'll wear it.  But I won't love it like I do my McCall's blazers. 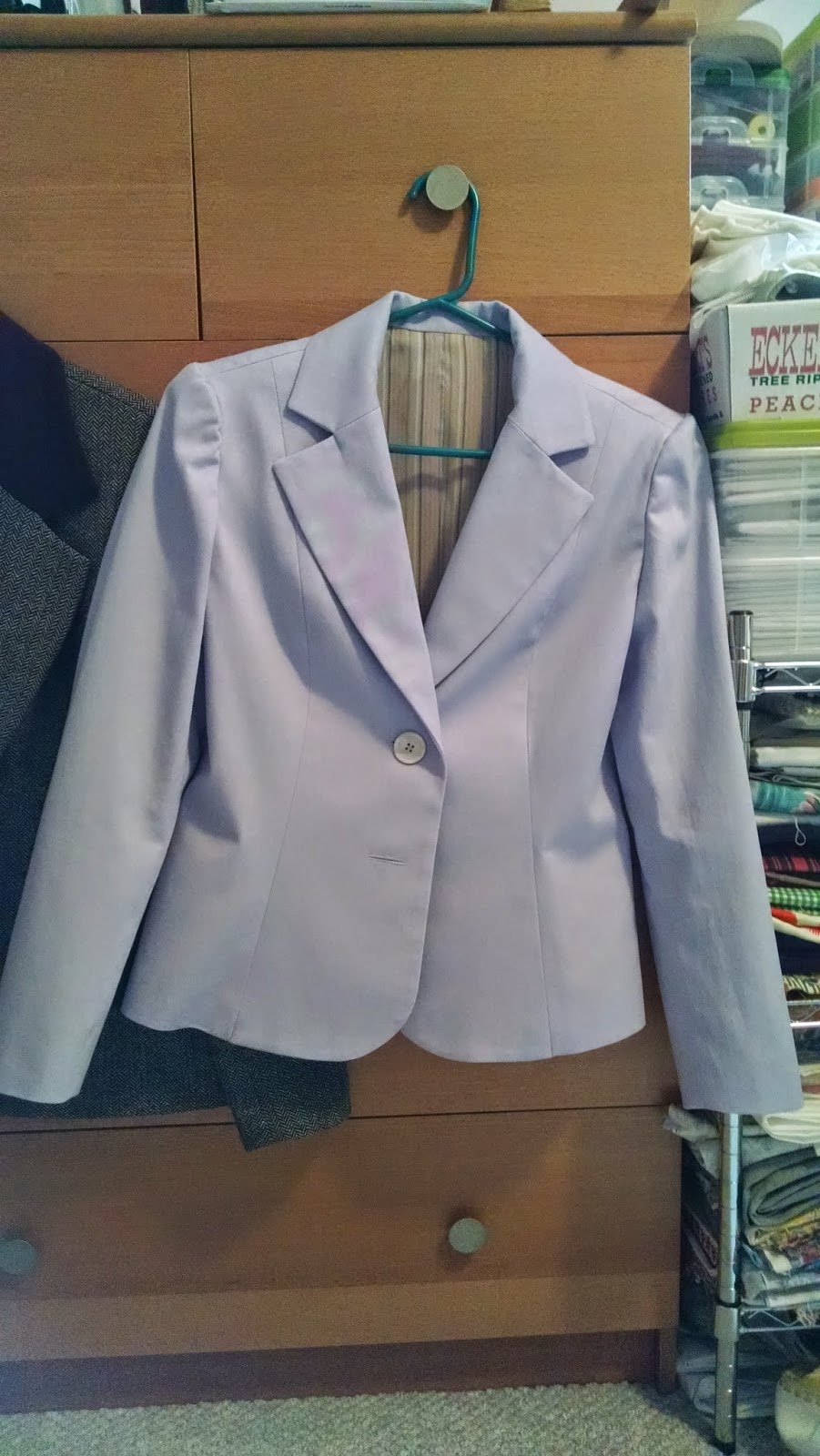 All the while I was making this blazer, I kept thinking that in my book the McCall's is a far superior pattern.  I decided to do a little comparison in case anyone was interested in the difference between the two.  I realize that my tailoring audience is probably pretty small, so if you have no interest in this sort of thing, you may stop reading now (if you haven't already).

Here's a table I made of the key aspects of each pattern: 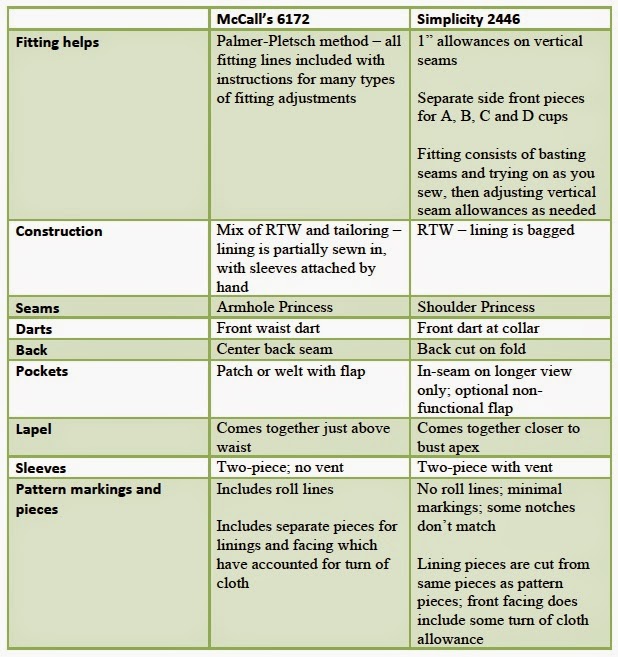 Let's look at them in depth, shall we?

If you've read any of the Palmer-Pletsch books and used those fitting methods, M6172 will be very familiar.  The first couple pages are a distilled version of all the adjustments you might need to make on this blazer.  You start with a tissue fitting, and then work your way through all the adjustments one by one; most of these are slash-and-spread adjustments.

The fitting method for S2446 is, for the most part, to take in or let out the princess seams.  There is a table to help you determine which cup size you need, and the side front piece comes in A, B, C and D cups.  All other adjustments are made to the 1" seam allowances on the vertical seams.

If your adjustments are mostly to the circumference of a garment, this is probably enough.  My personal adjustments are trickier though.  Because of my sway back and low round back, I ended up having to convert the center back from "cut on fold" to a seam.  I was able to adjust for my broad back along the back princess seam, but I felt that this doesn't give me as good a fit as the usual slash-and-spread I do.


I think that for anyone needing a small- or full bust adjustment, the McCall's pattern offers more precision, because it uses a slash-and-spread (or tuck) adjustment for the bust in addition to the princess seam.  I ended up using the B cup side front on the Simplicity pattern, but had to redraw the bust curve because it was too high for me.

If you think you might want to try out traditional tailoring, I'd recommend the McCall's pattern.  The instructions are for a traditionally inserted lining, which involves plenty of hand-stitching.  I didn't feel the instructions were enough though, either with the RTW version of my first blazer or the hand-tailoring of my second blazer - I spent a lot of time referring to my tailoring book and the Craftsy class on tailoring for both garments.  But I didn't feel the instructions for the bagged lining on the Simplicity pattern were clear at all.  And honestly, by the time I got to that point I was really ready to be done with this jacket so I didn't get out my book on lining to help figure it out - I just reverted to doing it by hand, which is default for me.

I was really surprised that although I'd made two blazers previously, I found the construction of the Simplicity blazer quite difficult.  Part of it was those 1" seam allowances.  After my tissue fitting, I went back and re-traced all my pieces so that everything had consistent 5/8" allowances.  But I also felt the instructions were hard to understand and follow; some of the terminology is different from what I'm used to, and the sewing instructions are interrupted with fitting instructions throughout.  On the McCall's pattern, all the fitting is on the first couple pages; after that, it's all construction.

The Simplicity jacket was rendered even more difficult by the fact that some of the notches didn't match up.  The most egregious error was the fact that the seam which attaches the under sleeve to the upper sleeve doesn't match up at all at the armhole - I ended up having to trim some away. 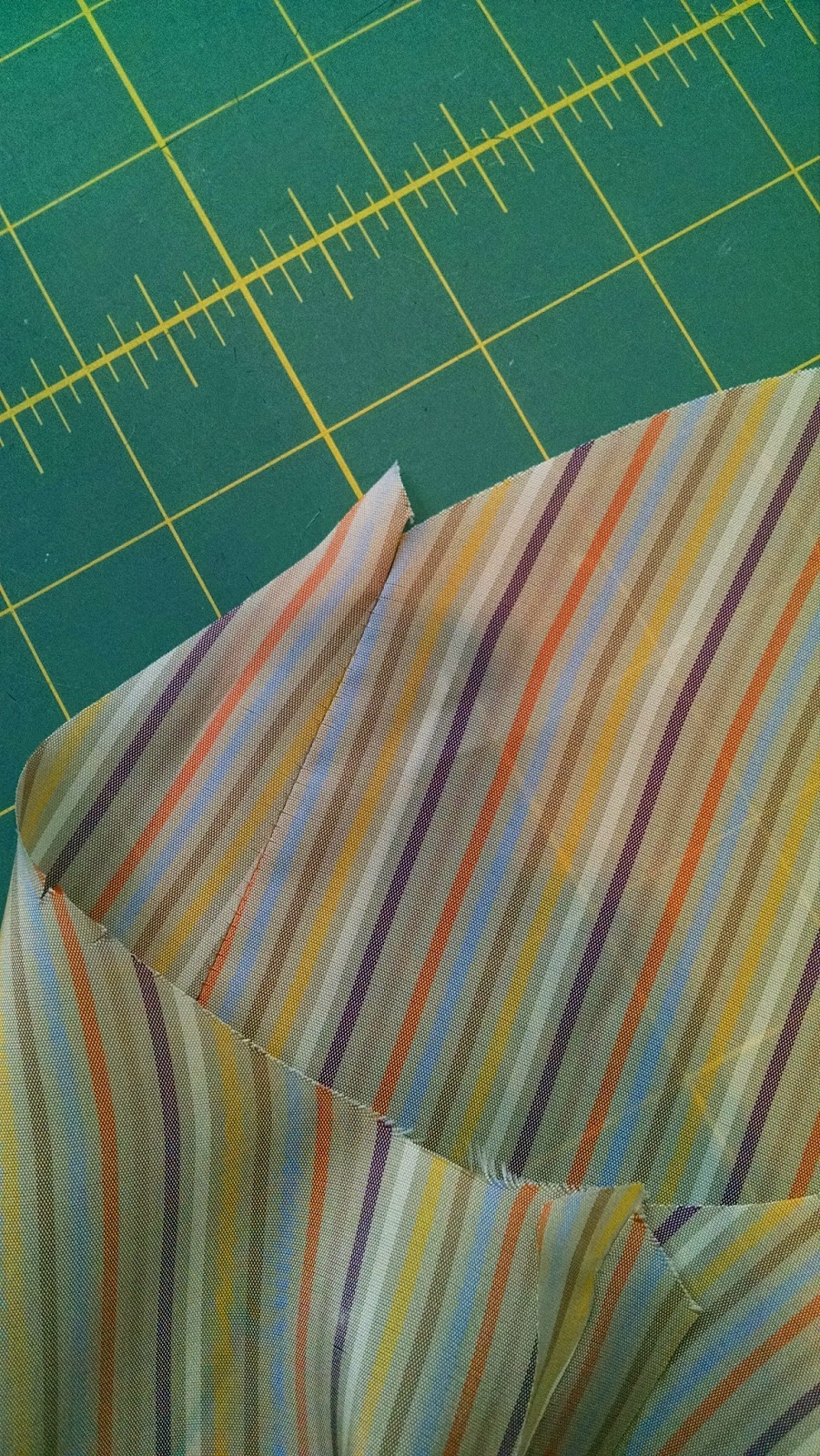 The markings on the Simplicity pattern are minimal - no roll lines for either collar or lapel.  If you wanted to hand tailor this jacket, you'd have to add those in yourself.  The lack of these markings left me unsure where to fold back my lapel when the jacket was done. 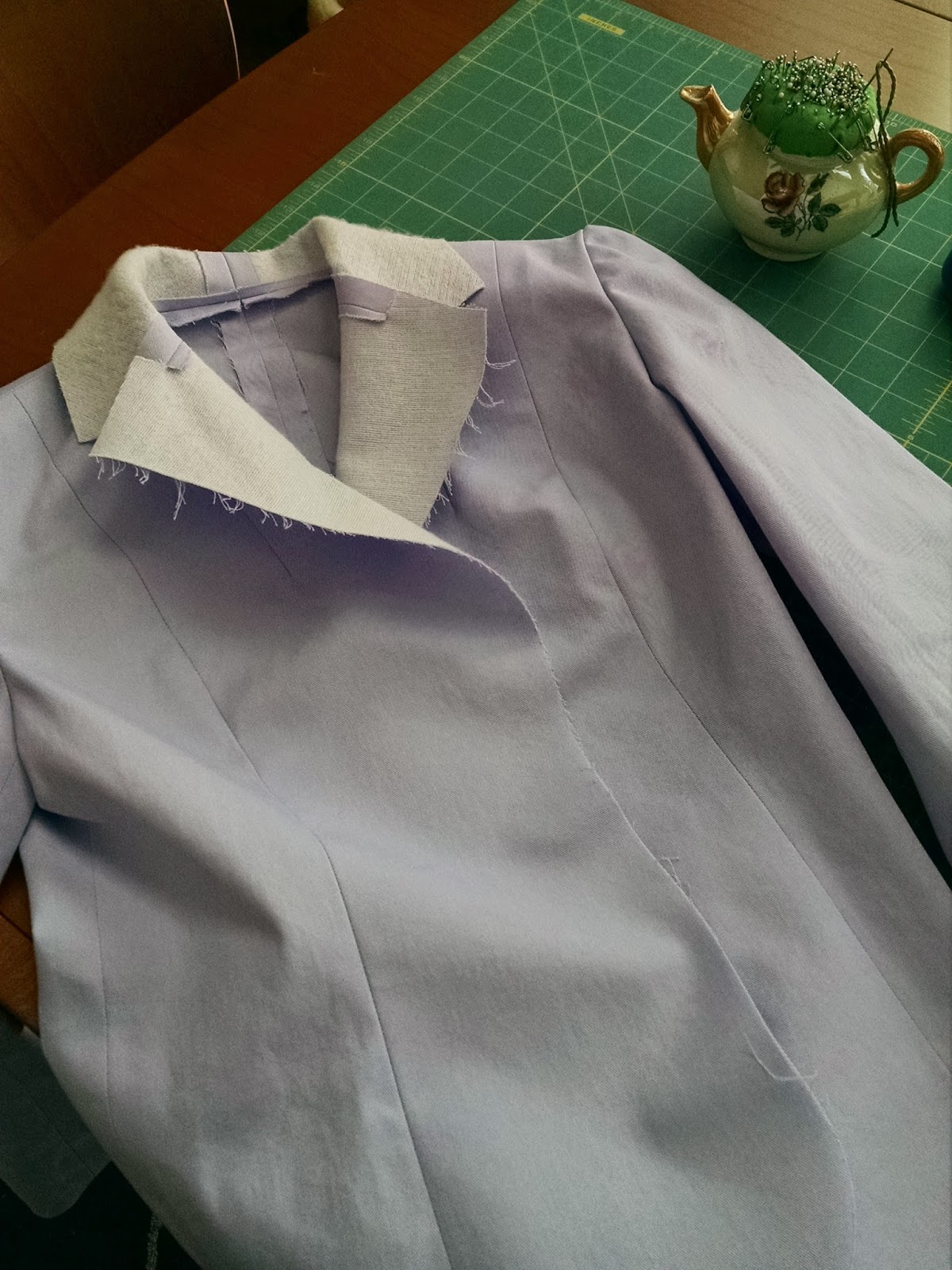 For me, probably the biggest strike against the Simplicity pattern is the sleeve caps.  The shape of the cap is tall and thin compared to the McCall's pattern; this gives the sleeve too much ease to go into the armscye nicely.  I'm pretty good at setting in sleeves, but this one was ridiculously hard.  I spent close to 3 hours just attaching the sleeves, and they're still not ideal.  Because of the extra ease, the sleeve sits up off the shoulder a bit - not a look I'm fond of.  And there was so much excess fabric in the seam allowance, I ended up having to notch it so my shoulder wouldn't look lumpy on the outside. 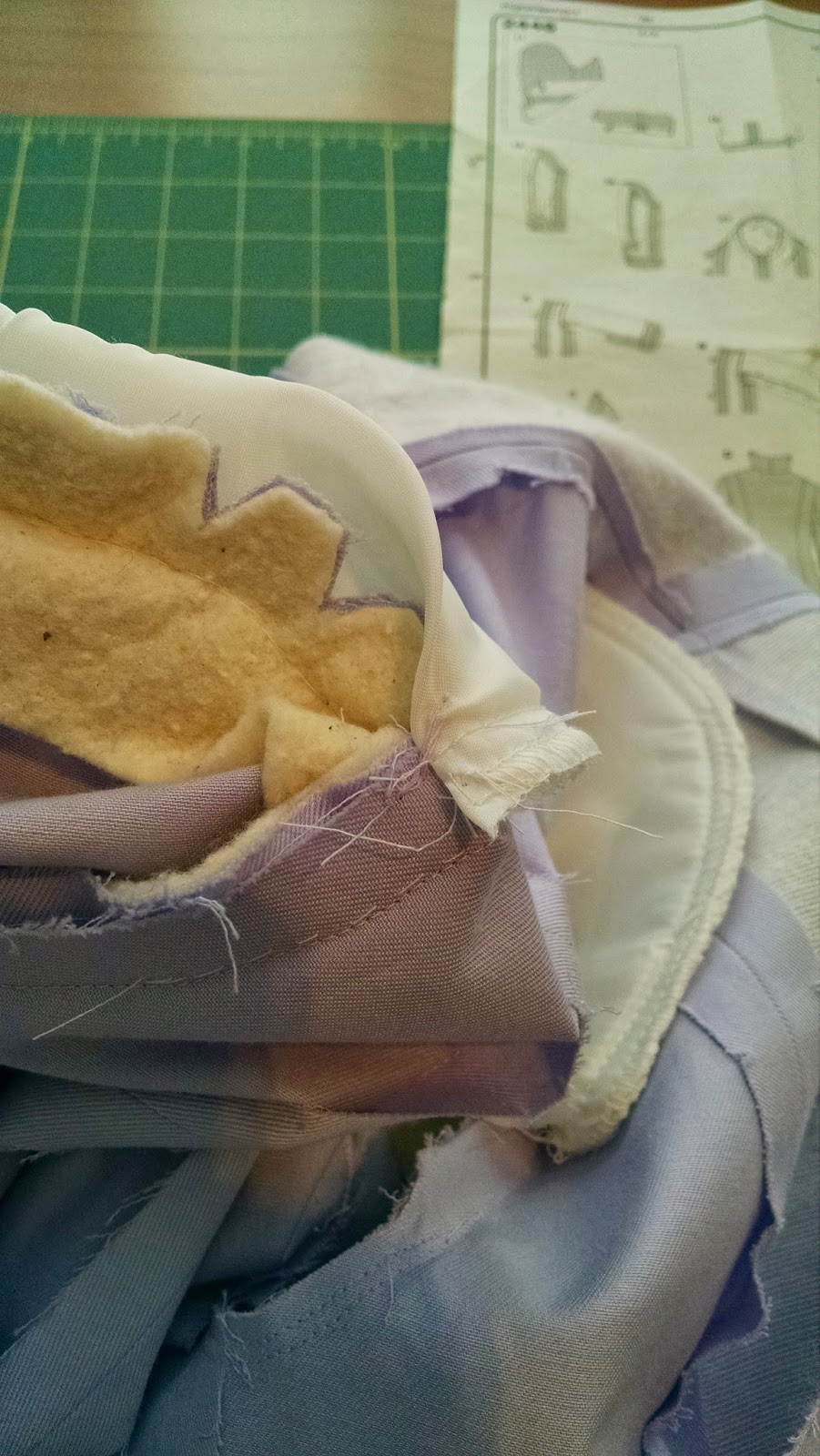 Here's a picture comparing the sleeve caps of M6172 (on bottom) and S2446 (on top).  The pattern pieces are not aligned, so that you can see how much more extreme the curve of the Simplicity piece is. 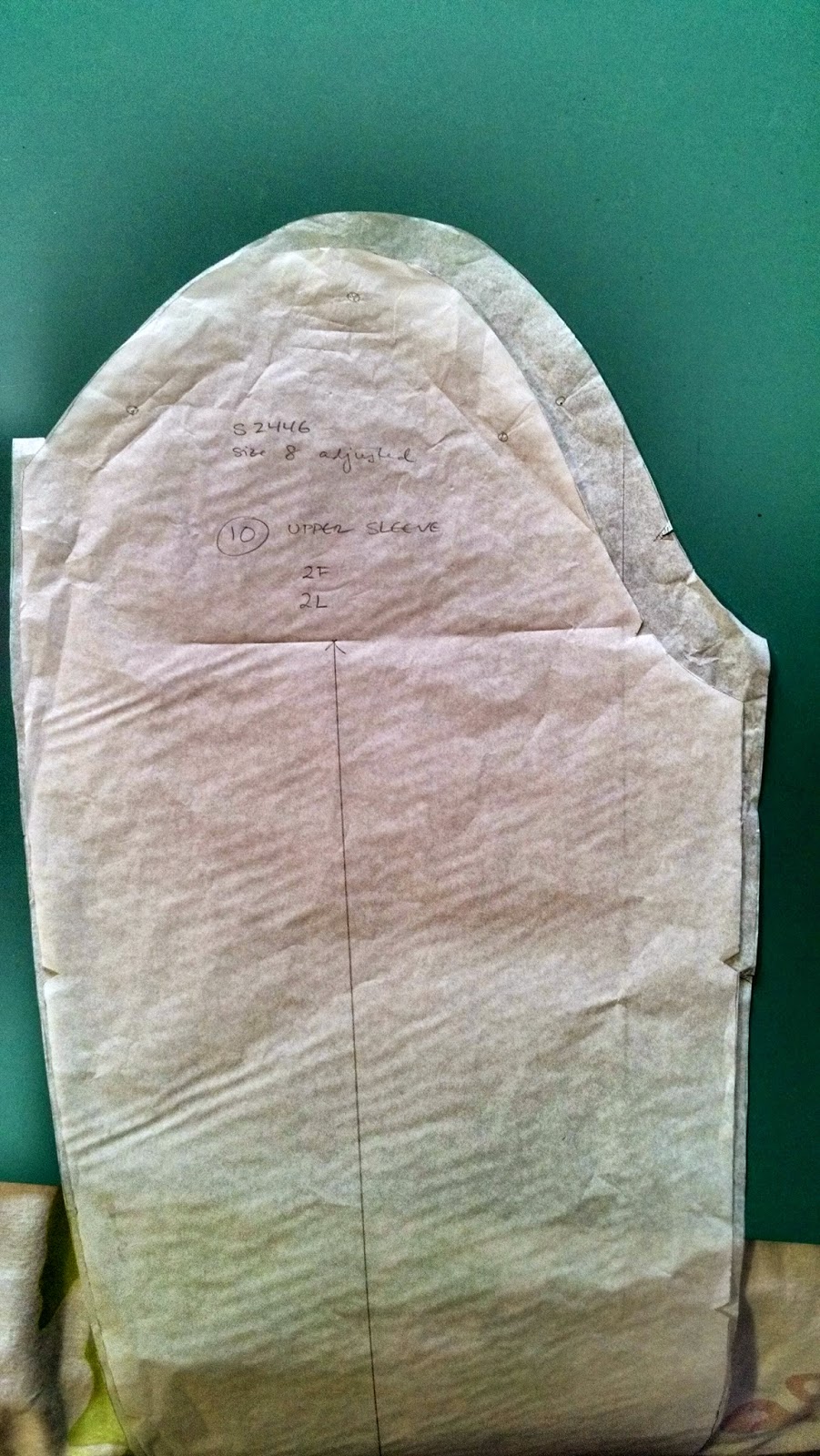 The Simplicity pattern does include sleeve vents, although as written, they are not functional.  Neither are those cute flap pockets - they're not pockets at all, just flaps sewn to the front of the blazer!  Call me a stickler, but even though I don't use the welt pockets on my McCall's blazers (they're still tacked shut!), if I'm going to the trouble of making a blazer, it needs to have the proper finishes.  There are in-seam pockets on the longer version of the Simplicity pattern, and I think they're pretty cute; however, the reviews I read did say they are too small to be useful.  I made the short version of the jacket, and because I didn't want fake flaps, I left pockets off altogether.

I did make the sleeve vents on my Simplicity blazer, and although they cannot be opened, they are cute.  I chose not to add that detail to my McCall's blazers because I usually find the buttons to be bothersome when I'm sitting with my hands or arms on a table or when putting on my winter coat over the blazer.  But since they were already included on the Simplicity pattern and I'd never done it before, I gave it a go.  This part of the pattern is quite nicely drafted, I think - it includes an angled cut to make a miter which I think is pretty foolproof. 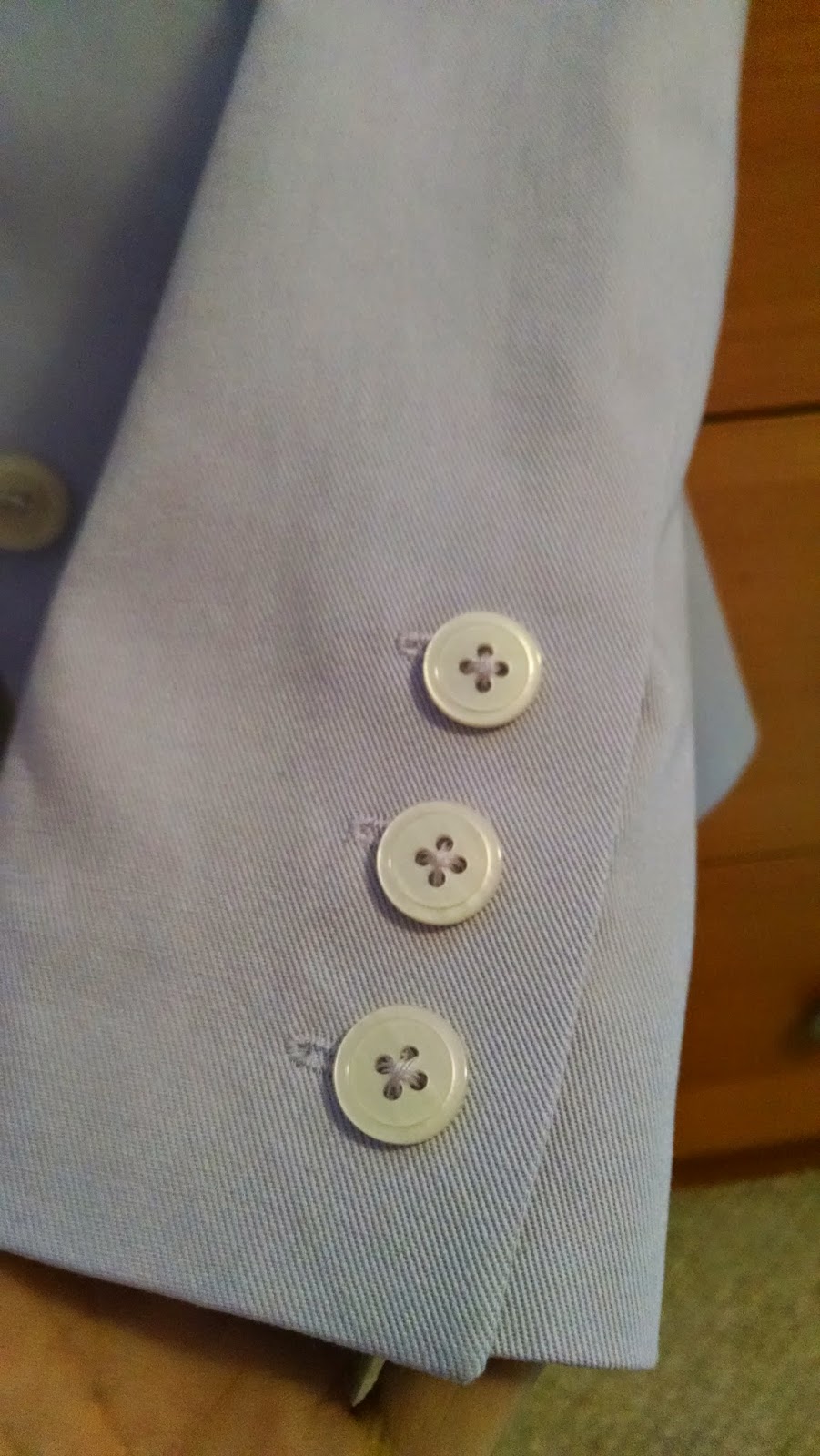 At first glance, these two blazers look almost identical, save for slightly different lapel shapes.  However, I think the difference between shoulder princess and armhole princess seams may be important to fitting.  I'm planning on researching that a bit, because I had much better luck with the latter.

Well, I think my preference is clear!  I know a lot of folks have had great success with S2446.  Alas, I am not one of those people.  I'll be using my McCall's pattern on the navy blue kit next month.

That said, I love the color of the Simplicity blazer.  I really bought it to use as a muslin for this pattern, but discovered that I can make lots of nice outfits with it!  Lavender goes with a lot of colors - who knew?   So I will be wearing this one this spring.

Have any of you used either (or both) of these patterns?  Do you have any information to add to this review?  I'd be very curious to hear others' experiences with these.