In general, I like to have two or three main knitting projects going and one or two "side" projects.  My current side projects are a pair of socks (stalled at the moment due to disinterest) and a large fine lace stole that I work on occasionally.

Finishing Betty left me with only Wallace as a main project, so over the weekend I began this: 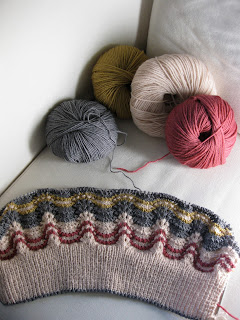 This one is called variously Alouette and Short-Sleeved Wavy Line Sweater, appearing as the former in the Rowan book Vintage Style (published as Vintage Knits in the US) and as the latter in Sarah Dallas' book Vintage Knits.

It gets worse.  Although the designs are basically the same, and are listed on the same Ravelry pattern page, the sizing, stitch counts and some of the shapings are different.  The Sarah Dallas book was published a year before the Rowan book, and the pattern for Short-Sleeved Wavy Line Sweater gives only one size, with a finished measurement of 36".  The Alouette pattern from the following year gives sizes XS to XL, but the finished bust on the XS is still 36", although the stitch count is less than the pattern from the previous year.

I went ahead and cast on for the XS.

I've wanted to make this sweater since I got the Sarah Dallas book in 2002, and have been saving all my leftovers of 4 Ply with the aim of eventually making it.  Having finished Betty, I finally got together enough yarn in colors I like together: 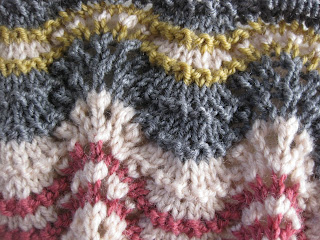 It's a fun and interesting knit:  feather and fan with a 40-row stripe pattern.  I'll have about 28 centimeters of carefree knitting, at which point I'll have to decide which armhole shaping to use.

I've decided to cross that bridge when I come to it.
Posted by Gail at 10:57 AM