I've been pondering for a while how to make my nails look like opals using flakie nail polish.  The other day I made my first attempt.  I don't think I'm quite there yet, but I thought I'd share it anyway: 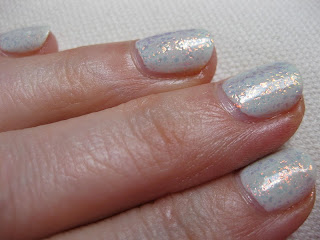 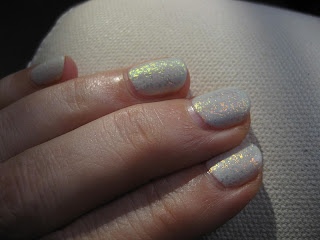 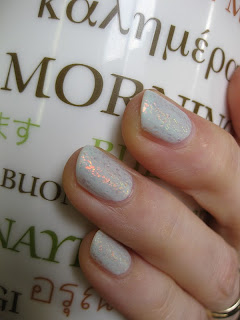 The top photo is the first version.  I used one coat of Essie Absolutely Shore, and didn't worry about it being streaky.  On top of that I put two coats of China Glaze Moonlight, a very sheer off white.  Then I topped the whole thing with three coats of Nubar 2010 and one coat of Essie Good to Go.  It was very shiny and I felt like it didn't look too much like opals.

The next morning I realized it might look a little better with some matte topcoat, so I applied that, and sure enough, it started looking more like opals!  Very hard to photograph though!  The second photo is a tiny ray of sunshine in which I tried to catch the opalescence, and in the third I finally captured a little of the pink.

I think next time I try this, I'll add in some pale pink blobs while the green is still wet, and then cover it with the sheer white and the flakie.  This was a good start though, and I'm glad I finally tried it - it's been in my mind for a couple months!
Posted by Gail at 7:00 AM