Looking Backward at Pay It Forward

Remember Pay It Forward?  Way back in July?  I didn't get many takers - only two, as a matter of fact.  The game had already been making the rounds for several months by the time I got involved, so that combined with the fact that I have a rather limited audience made my low response rate not much of a surprise!

In mid-September, after we gave our niece and nephew back to their parents and settled back into our lives after our trip, I spent a very nice afternoon making my gifts.  And now all the recipients have received them, and I can tell you about it!

Although I only got two responses, I decided to go ahead and make five gifts anyway.  Since the idea was to send someone an unexpected something, I figured that would be OK.  Two were for the commenters who wanted to participate and two were for other bloggers I've come to know rather well.  And the last . . .
Well, more on that later.  Here's what I made: 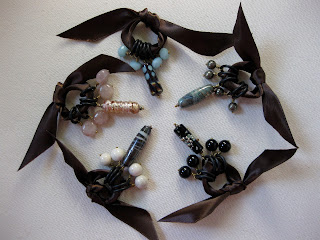 All four of my giftees turned out to be knitters, so I made each a set of stitch markers.  Each set includes one large (beginning of round) marker made from a glass bead made by me, and four smaller markers made of stone.  I had a ton of fun making these and thinking about which set should go to which knitter!

Glass bead-making is something I used to do a lot, and I used to sell quite a few of my handmade beads. It really is a fascinating pursuit.  It's so mesmerizing to watch the glass melt in the flame, and the chemistry of the different colors is intriguing. Controlling hot glass is a lot like trying to keep honey from dripping off a knife - except that the glass is about 1,700 degrees Fahrenheit!

Here are some closer looks at the beads: 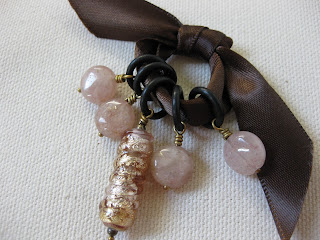 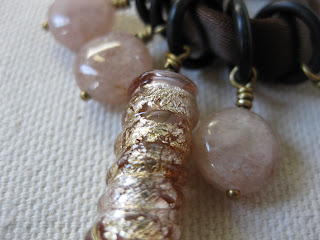 This first set went to Gingermakes.  The large bead is pale pink transparent glass wrapped around a core of fine (pure) silver.  It looks gold because of the chemical reaction between the glass, the silver and the gases in the flame!  The beads are made using a torch that mixes oxygen and propane.  The smaller beads are a stone called muscovite. 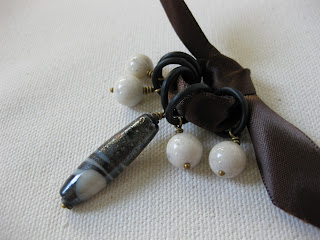 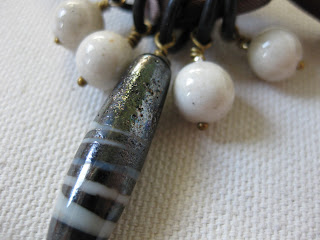 The second set went to Twisted Knitter.  This bead is a base of black, with some ivory randomly wrapped around it, and partially rolled in reduction frit.  Frit is glass that has been broken into sand-like pieces.  Reduction glass is glass that takes on a metallic sheen when the flame of the torch is adjusted to be mostly propane.  All this from chemistry!  If I'd known it could be fun, I would have paid more attention in high school!  The smaller beads on this set are riverstone. 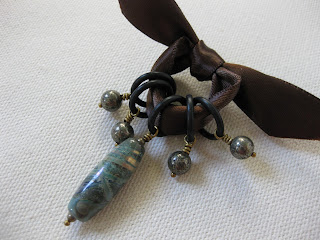 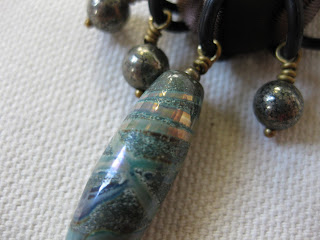 Next up is the set that went to SoKnitPicky.  This bead is made of copper green glass, which is also a reduction glass.  It gets its color from copper, and you can get a lot of interesting effects from this glass depending on what other colors you mix it with.  It was one of my favorite colors to work with.  It is wrapped randomly with another color of reduction glass, iris gold.  The smaller beads are pyrite, also known as fool's gold. 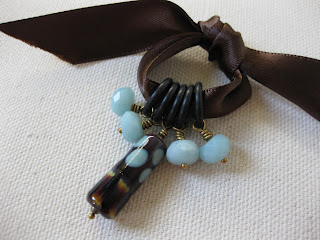 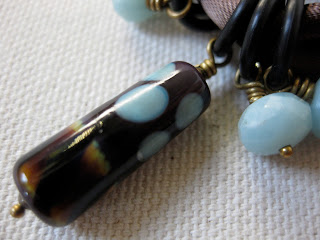 And the last set went to StitchParade.  The base of this bead is very deep purple, and it's dotted with copper green.  At the bottom is a "twistie" made of black glass and raku glass.  A twistie is two very thin rods of glass that have been melted and twisted together - very much like plying two strands of yarn.  Raku glass is another reduction color, but this one changes to a wide range of colors instead of turning metallic.  And the small beads are amazonite.

Which leaves this set: 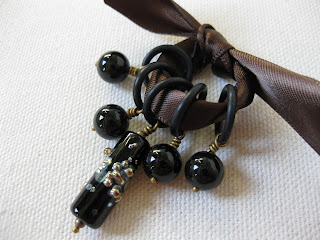 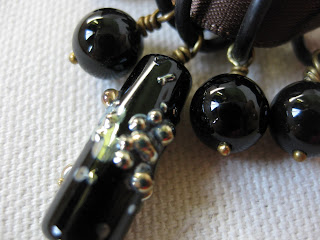 This bead is black glass with a layer of - you guessed it!  Reduction frit!  The frit has only been partially melted in, to create a bumpy surface, and it's iris gold, one of the types of glass that turns metallic.  The small beads are black onyx.

I had various thoughts about what to do with this set (including keep it for myself!), but in the end I decided to do a little give-away.  So if you are interested in giving these beads a home, just let me know in the comments.  I'll keep it open until October 15 (and I guess I ought to say midnight or some such) and then, assuming I get any responses, I'll use the random number chooser from the interwebs and choose a winner.  It's open to anyone, not just knitters - you're welcome to take the beads and make something else from them!  I've heard that SoKnitPicky is wearing hers as a pendant!

And if you've read this entire post, you really do deserve a prize!
Posted by Gail at 8:46 PM