I actually finished Betty on Wednesday, but it was so dark and rainy here that I didn't get good enough light to take a picture until yesterday: 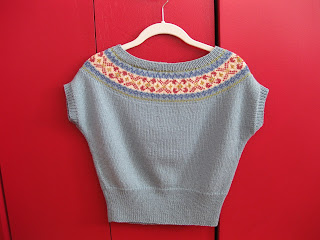 I'm mostly happy with how this turned out, but I wish it were an inch or two longer.  It will be OK for a high-waisted garment, like the Ginger skirt, but it's really too cropped for anything else.  As it is, I added an inch in length after the ribbing because I'm long waisted.  It just wasn't enough.  The shape is very interesting though, and makes quite a nice line when worn. 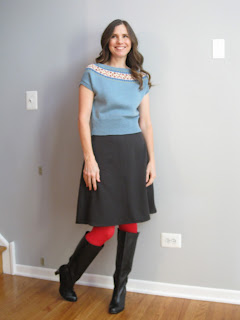 Since I had to rip out my first attempt because of the color variance of the turquoise balls, this time I decided to change the bottom ribbing as well.  The pattern calls for the ribbing itself to have waist shaping (which on me would have ended up on my lower ribcage!), and I really didn't care for how that looked.  So I cast on the number of stitches after all the shaping is done, and knit the whole rib on that number. 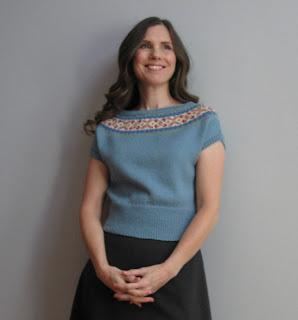 I really love stranded knitting, whether Fair Isle or Norwegian, and had a lot of fun doing the neckline: 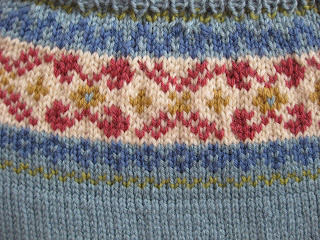 There was only one problematic row (right in the center) which had three colors - the turquoise was carried across 12 stitches!  I considered just doing the ochre and cream and going back later with the turquoise in duplicate stitch, but decided that would actually be more of a nuisance.

Because I added the extra length, I didn't really have enough of the turquoise left to do the neck edging and the armhole edgings.  So I used the off-color ball of turquoise to complete the yoke after the raspberry and cream section - since it is separated from the body of the sweater by the band of color, you can't tell that the dyelot is off.  That left me enough of the matching yarn to do the armhole edgings. 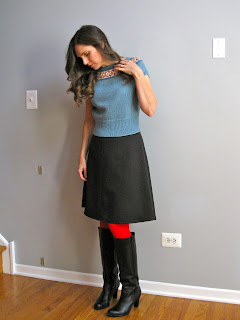 And now I've got lots of nice colors left over to use in other stranded or striped projects . . .
Posted by Gail at 7:00 AM