Well, not as much knitting as I'd like, but I have managed to get Adrift to within two inches of bind off!  Hurray! 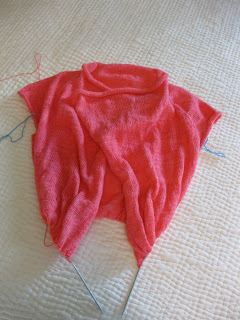 It's actually starting to look cardigan-like!  I also restarted Betty - worked flat this time.  I don't know why working flat seems so much easier and faster to me.  Quite counter-intuitive.  I'm getting close to the yoke bind off: 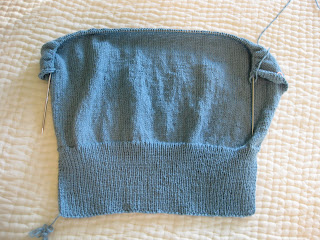 But the weather has been very summer-like here, so at the moment I'm concentrating on getting Adrift done with hopes of wearing it at least once before autumn returns!

I hated my mani so much yesterday that as soon as I got home I took it off and replaced it with this:


Interestingly, I got a lot of compliments on yesterday's mess of a mani!  But I like this one better, especially after I added sparkly tips this morning:


I've been wanting to try this out ever since I saw it on Pinterest a couple months ago.  I did it a little differently from the tutorials I read, which said to wipe most of the glitter polish off the brush and then stroke backward from the tip of the nail.  I felt like I'd get glitter underneath my nails doing it that way, so instead, I wiped off about half the glitter and then dotted it along the tip of the nail.  I dotted the tips of two nails, and then went back to the first one and pulled the glitter down, and then pulled down the second.  I think the few seconds of dry time in between helped the glitter to set a little so that it didn't pull all the way down the nail.  I'm really loving this! 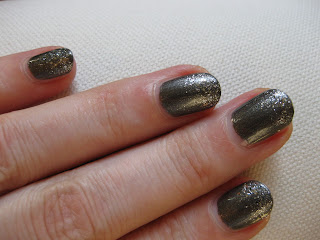