Back from vacation now!  I can't actually say that I'm any more rested, but it was nice to visit with Hubby's family.  I'll be putting up pictures of some of the places we went later in the week, but first things first:

Guys, I'm not 100% sure I'm going to make it.  And not because of the whole washing-machine debacle.  (Did I mention that?  Two weeks before we left, my washing machine broke, and I didn't have time to replace it before we went.  So I was stuck going to the laundromat, and I wasn't really sure if I would get a new one soon enough to have a good supply of clothing in September.  But the first thing I did yesterday morning - our first morning back - was to head to the store and order a new one, which should be delivered on Thursday.  Hurray!!)

No, the reason for my failing, if I do fail, is my own perversity.  I'm the kind of person who, as soon as I'm told I need to do something - even if it's by me - finds that thing the least desirable thing in the world to do! So we'll see how long I make it.  It could be the jet lag, but I'm finding that picking an outfit and photographing it is the last thing I want to do at the moment.

But I got a good start.  I took three Sorbettos and a big sweater with me and got photos on the first four days of September.  And here they are:

September 1:  White embroidered cotton Sorbetto with a denim skirt I bought from Boden several years ago.  This is the best of the three photos taken by my niece, so I apologize for the lack of detail.  I'm standing next to my father-in-law's pear tree; the pears were just a touch under ripe, but delicious nonetheless.  Looking a little chubby here, which is due to inactivity and my mother-in-law's fabulous cooking! 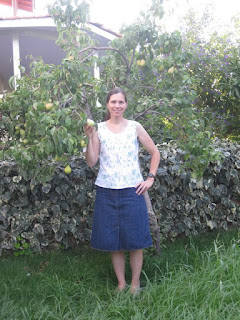 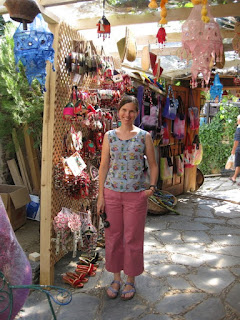 September 3:  Ditsy floral Sorbetto with Old Navy pants and Keen Madrid ballet flats, which sadly have been discontinued.  These have been my go-to shoes for the last 3 summers, which has resulted in a goofy tan line on the tops of my feet.  I really loved this outfit, not least because I love these pants and finally fit into them again after not being able to wear them for about a year!  I'm standing in the weekly bazaar of the town where my parents-in-law live, laughing because my two little nieces (ages 3.5 and 5.5) each had some pocket money, and were trying to decide what to buy - precious! 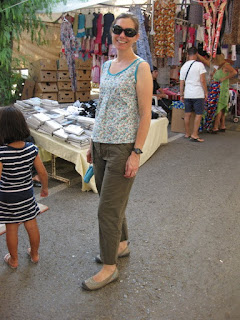 And a back view: 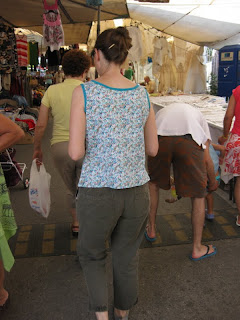 September 4:  On the way home.  Wearing my traveling outfit, which consists of a comfy, roomy, longish brown knit skirt, a coral/pink sleeveless tee printed with an Om and my trusty Keens, topped off by a sweater I knit several years ago.  The sweater is called Swank (much better picture on my Ravelry page), designed by Kim Hargreaves and knit in Rowan All Seasons Cotton.  Big and floppy, like a comforting blankie with sleeves and a hood.  I'm still cheerful at this point in the trip, having completed the first leg (an hour's drive to the airport at 5:30 a.m. followed by an hour's flight) and made my way to the Starbuck's at the Istanbul airport.  Things went south a little later, after we had to go through 5 security screenings, at the fourth of which the mean lady confiscated my #5 bamboo circular needle.  Which had knitting on it.  And which was really stupid, considering it was inside my carry-on, and yet right in my purse, I had a much sharper, metal 2.75mm circular.  But I digress.  Here's my outfit: 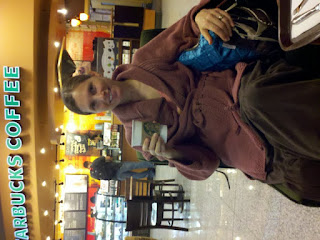 September 5:  Fail #1.  I did wear a handmade item - another sweater I knit several years ago - but I was running around all day and by the time I was done with everything I needed to do, I was just too tired to take a photo.  So I'm going to try to do a make-up photo some time this week.  But for the record, my outfit consisted of the Fifi sweater in lavender, a very old denim A-line skirt from Boden and black Keen Sienna ballet flats, as well as my super-fancy Wade Mei Fa Hairstyx.  Of course, no make-up or jewelry.

And there you have it.  How is your September going?  For those doing the Self-Stitched-Sept '11 Challenge, have you managed to keep to it so far?
Posted by Gail at 5:38 AM