What I Did on Summer Vacation

Aside from visiting the places you've seen, I also did this:


Or rather, most of it.  I was able to complete all the pieces but the second sleeve, which I managed to squeeze out last week.  I sewed it together on Friday and Saturday, in between other projects.

I made this one slightly differently from the first one.  I wanted it to be slouchier, so I could wear it with lower-waisted bottoms, so instead of starting with fewer stitches for the ribbing and then increasing to the number for the main body, I just started with the number of body stitches right from the beginning.  I also did the ribbing in the same size needles as the main pattern.  It is quite a bit slouchier than the first one, but I wish I'd made it an inch or two longer.  However, I had just enough yarn as it is.

And just for laughs, here's the uncropped photo: 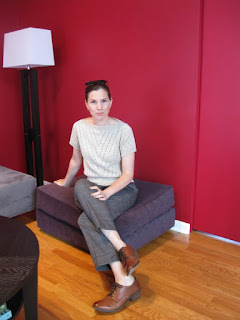 Why is this funny?  Because my left foot looks twice as big as my right foot!  And actually it's a whole size smaller!

Here are some more outtakes: