I got dressed today!  Woo hoo!!

I had a lot of running around to do again, so not only did I put on some clothes, but also some jewelry and a swipe or two of make-up!  Here's the picture Hubby took:


I'm wearing a sweater I knit maybe 4 years ago, along with a J.Crew tank and linen J.Crew skirt, and yet another pair of Keen Siennas, this time in wine.

AND two pieces of jewelry made by me.  I know this doesn't make up for lack of SSS '11 pictures for the last two days, but it does fall within my goal for the challenge; I have so much jewelry I've made, and I rarely wear any of it any more.  I wanted to dig out some of those things and let them see the light of day.

I took plenty of detail shots because you can't really see any details in the photo above.  First up are the earrings.  These hoops are one of the project classes I used to teach when I was working in the studio.  Sterling wire is run through a rolling mill, then ear wires are soldered on, holes drilled, and the hoops formed on a mandrel.  Then tiny ruby beads are attached with more soldered wire.  I had wanted the beads to be more offset from one earring to the other, but it didn't work out that way.  I really like how these look on, but I have to admit that they kind of drive me crazy because they always get caught in my hair.

The necklace is an example of another class I used to teach, PMC.  This is a really interesting product.  It is fine silver (i.e. pure silver) in particulate form, suspended in an organic binder.  It looks and feels like clay, and you work it a lot like clay, but once the piece is finished, you pop it in a kiln, let it cook for a while, and hey presto - you've got a piece of metal!  The pieces for this necklace were made by rolling out the "clay" and pressing in the design using a plain old rubber stamp, along with a few CZ jewels.  After firing and polishing, I refired the piece with some wire loops attached to the back with the same clay, but watered down.  One more firing, and then it was ready to assemble, with some wire, a few seed pearls and some chain.

And finally, the sweater.  This design is Tulip by Marie Wallin, from Rowan 41.  The magazine was published in 2007, and I think I made it the same year - it was pre-Ravelry, so I'm not really sure.  The yarn, Rowan Damask, is a slubby linen/rayon/acrylic blend, now discontinued.  I don't really remember much about knitting it, i.e. whether the yarn was nice to knit with or not.  I made the smallest size, like I usually do, and got gauge, but it has always been a little big on me.  I would probably wear it more if it was more fitted, but as it is, I'm always feeling like I have to tug it back onto my shoulders and around my body.  The fabric is lovely though: 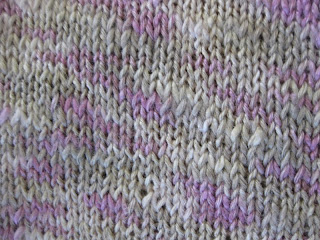