Well, I'm having a busy day, so there is little chance of fixing myself up and taking pictures of Jewel.  I'm in the process of creating a nice, organized music room for Hubby for his birthday!

I ended up finishing three projects over the weekend:  Jewel, Adore and the sun hat.  The sun hat is actually not quite finished - I need to find some twill tape to weave the band. 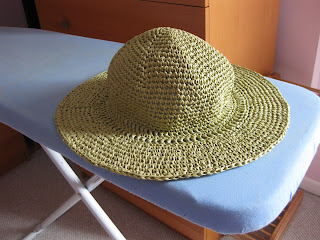 I'm not sure how I feel about this hat though.  Although I checked my gauge (and it was right on), it is too big for my head.  Not so much of a surprise, because I have a rather small head.  But the brim came out much wider than what is shown in the picture on the pattern and what I saw as a sample in the LYS. Meaning it is quite floppy. 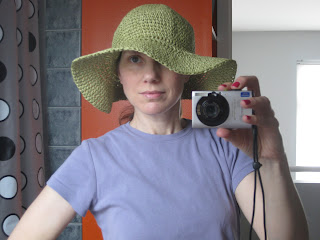 Now, a nice, wide brim is what you want if you're trying to shade yourself from the sun.  And part of me likes the '70s boho vibe it gives.  But it's kind of in the way.  I may get some starch and see if that helps stiffen it a little.  The jury's still out on this one.

The other day I found all six colors of the Essie summer 2011 collection, Braziliant.
I've been kind of stalking this collection.  It wasn't due out until June 1, but I read somewhere that some Walgreens stores had gotten it early, and sure enough, I found them in a not-so-local store.  Happiness!  The first one I tried is called Super Bossa Nova. Love the name, because I love bossa, and love the color too:


Bright raspberry pink, with just a hint of blue shimmer.  The formula on this one was odd though.  It was thick, though not difficult to apply, and chalky, for lack of a better word.  Even after the topcoat dried, it still looked like more of a satin finish.  I tried adding a coat of CND Super Shiney topcoat to one of the nails, but it didn't make a noticeable difference.  I'm wondering if the bottles being sold in salons will have a different formula.
Posted by Gail at 2:03 PM