Hubby had a lot of work to do this weekend, so I indulged myself in lots of craftiness.  I did a fair amount of knitting on Mandarine (halfway done with the first sleeve) and a little editing on Ravelry, but I also did THIS:

I started this dress two years ago, then left it half finished because I was afraid it wouldn't fit, and I just couldn't find the motivation to go on.  But Sarai has recently come out with two new patterns, with which I'm in love:  Violet and Ginger.  I was at the point of ordering them when I decided it might be a good idea to finish my first Colette pattern before buying some new ones.
I was partly right; it does fit, but it doesn't fit well.  I'm not a good enough seamstress to do things like small bust adjustments and custom fitting.  I'm wondering if I made the bodice and the skirt two different sizes, because I had to gather the skirt a little in order to make it fit the top.  But I didn't take any notes, and I traced rather than cut out the pattern pieces,  so there are no clues there.  I was worried it would be too small, but actually it is rather loose on me, which I don't mind too much.  It looks a lot better when I wear a cardigan over it.
My favorite things about this dress are the pockets and the buttons: 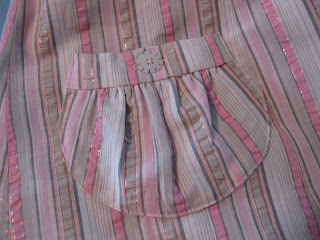 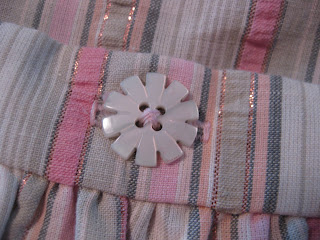 AND the sparkly seersucker fabric!  The weather has turned cold again here, so it may be a while before I can wear it.  And I also think modeled pictures should at least wait until I've combed my hair.  What a relief to have that done after all this time.  Now I have to decide if I want to order the new patterns . . .

To go along with it, I put on two of the new polishes I got this week.  I went to Ulta really intending to get OPI Mermaid's Tears if I could find it.  And I did score the very last bottle.  But I also came away with Sparrow Me the Drama, Silver Shatter, and the Spark de Triomphe and White Shatter set.  So here's Sparrow Me the Drama: 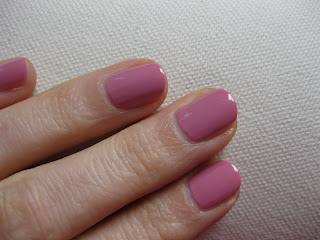 And here's the sparrow on crack: 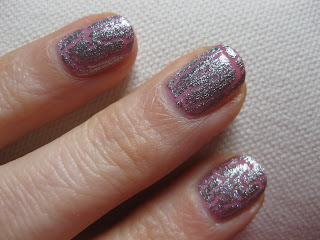 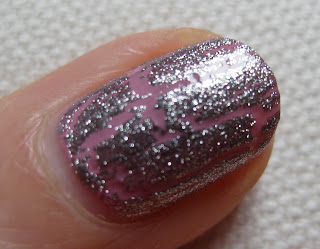 I wasn't on board with the whole crackle thing when they first came out.  Didn't we do this already in the '80s?  I seem to remember something like it.  But when I saw the silver shatter on some swatches online, I really liked it.  I was pretty surprised to find three bottles remaining at Ulta - I know these things have been selling like hotcakes.  If I could have bought Spark de Triomphe without the white shatter, I would have, but I did try it out the other day over an old mani before I took it off, and I liked that one too!

I was interested to try out OPI again.  Way back in the day (very early '90s) it was my brand of choice.  I think I bought most if not all of every color in every collection they did.  I believe they were only doing two a year at that point, and I remember eagerly anticipating the release dates, which were advertised in magazines.  But after several years, it seemed like the colors were being repeated, so I didn't buy as many.  And then China Glaze became available where I shopped and I liked the formula much better, so it became my new brand of choice.

So aside from Dating a Royal, these are the first OPI polishes I have bought in many years, and certainly since they've been 3Free.  And I have to say, I think for the most part, I'll stick with China Glaze and Essie, unless I really love a color and it fills a void in my collection - like these did.  I was really unimpressed with the brush on these; the bristles were stiff and extremely coarse.  And the dry time is much longer than either China Glaze or Essie, although that could possibly just be the nature of the shatter.  I think the blue jelly I did a couple weeks ago had a reasonable dry time.