I was so excited about all the sewing stuff, I already got sidetracked!  So I'm doing my Fancy Shoe Knitting today:


I'm working on finishing up Mandarine.  I've completed all five pieces of the body, and am at the point of doing the (separate) collars.  I've got about half the first collar done, so I may be able to finish this weekend, if I can keep from getting further distracted!  I'll need some buttons though, which probably requires another trip to the fabric store.  Uh-oh!

I'm wearing my "PMJs," as they are known among a certain sector of Gleeks.  These babies have only ever been worn for FSK.  That's right - I have never worn them out in the wide world.  I love them though.  I bought them when they were in the store, years ago, but I believe they have become quite the sought-after item now.  Here's another peek:
I actually sort of wish I had bought the blue/red combo - one of the reasons I've never worn these is that I have a hard time figuring out what to pair them with.
And here are some nail pix.  I put on Zoya Heather last night: 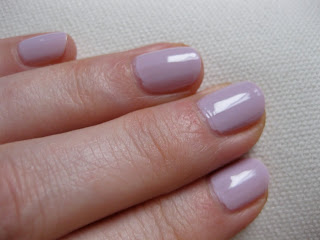 A really lovely color.  Zoya lists this as a 3 on their opacity scale of 1 to 5, but I'd call it a 4 myself.  I was expecting it to be sheerer.  This is only two coats.  It was a little tricky to apply, but evened itself out with the second coat.

Today I added some Konad:

This is Konad plates m57 (fishnet) and m71 (wallpaper).  I'd seen a few other bloggers do this look, and I liked it and wanted to try it.  It's one of the reasons I bought the m71 plate, although it has lots of great designs I see myself using.  I stamped with Sinful Black on Black, and boy, was clean-up a hassle.  I still haven't gotten off all the residue around my cuticles, and I killed one of my brushes trying to get it off.
I'm sure you've figured out by now that the shoes and nails are all a ploy to distract readers from the lack of tangible knitting content  . . .