For several years, I've been buying knitting magazines directly from Phildar in France.  I just got two new ones this week:

Magazine no. 50 has a lot of great patterns, but I am especially digging these two: 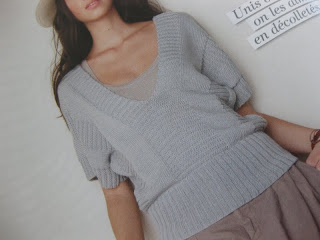 Now, I was a French major in college (yes, really), so it's not big deal for me to get these in French.  Phildar does sell some magazines in English, but for some reason, they don't translate every single issue.  I don't always buy the "easy to knit" issues, but occasionally I do if I like some of the patterns or styling.  Number 53 is just such an issue.
When I opened it up, I found that the format had changed somewhat from the last time I bought one of these.  All the instructions are super clear, and at the back there are lots of illustrated tutorials for beginners.  I think these are so clear that this would make a great reference for people who like the Phildar magazines but don't speak French.  Here are some examples:

Up until a year or so ago, ordering online from Phildar was an exercise in patience; it would take weeks for the goods to arrive.  But they've changed things and the last several times I've ordered, I've received my magazines within the week!  I think the shipping is pretty reasonable (7.5 Euro), and Phildar has lots of sales throughout the year - right around the new year, they were having a sale WITH free shipping, even to the U.S.!  Can't beat that!