OK, so we've got a lovely thread-wrapped ball with divisions marked with pins.  I forgot to mention that the division we did is called a "simple 8" division.  It's handy to know this in case you want to search for different designs that can be done on this division.

For this step, you need both your paper scissors and your cuticle scissors, your perle cotton (I used size 5, which I got at Michael's), metallic thread (also from Michael's), needle, pins and the strip of paper you used to mark your ball.  Start by cutting a length of metallic thread that will go around your ball 4 times, plus about 6 inches. Tie a knot at the very end: 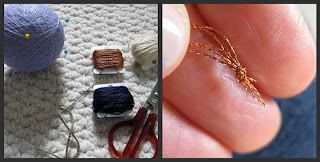 Thread this onto your needle, then stitch it into the ball, coming out exactly at one of the pins for a pole and pulling it tight so that the knotted end gets buried among the sewing thread wraps: 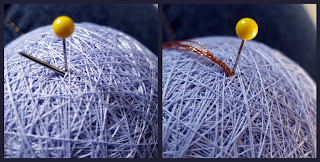 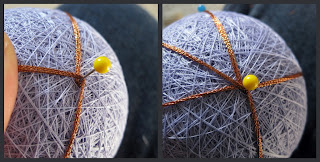 On your last trip around the ball, tack the threads down at both poles with a backstitch (I usually do one at the south pole and two at the north pole where the pivots are), making sure to go through some of the sewing thread as well: 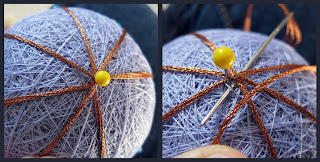 Once you've come back to the north pole and have tacked the marking threads down, take your threaded needle out a couple inches away, and then cut off the remainder very close to the ball, making sure not to cut any of the sewing thread. If some of the color of the metallic thread shows through, you can use the tip of your needle to push some of the sewing threads over it to cover it up. 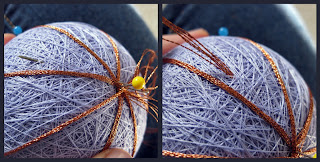 Now your ball is marked and you're ready to start stitching!  The design I'm doing is called "spindles," and for this design I don't want my equator to be visible.  Many designs do need a visible equator though, so you can mark the equator with metallic thread in the same way as above if you need it.

I decided to do spindles of alternating lengths, four long and four short.  I left all the equator pins in until each spindle was stitched.  I started with my short spindles. I took my "measuring strip" and folded two of the eighths in half right next to each other and cut notches.  Then I used that to make markings to the north and south of an equator pin: 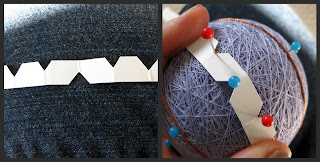 Next I got an arm's length of ecru perle cotton, knotted one end and threaded the other end onto my needle.  I stitched into my ball, bringing the point of the needle out just to the right of the red pin south of the equator: Pull the thread tight to bury the end, then take it to the left of this pin and the metallic thread all the way up to the red pin north of the equator.  At this pin, take a small stitch from right to left under the metallic marking thread, catching a few sewing threads as well: 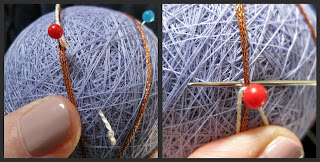 Flip the ball 180 degrees and do the same thing back at the first red pin.  Continue in this way, flipping the ball and building up the spindle to the right and left of the center metallic thread. 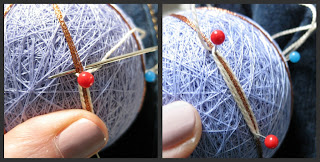 You can remove the pins after the first couple threads have been placed.  Do as many rows of this color as you'd like and then change to another color.  Bury the end and cut off the tail as before. 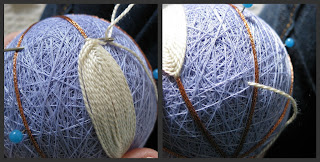 For this ball, I did 9 rows of ecru ad 5 rows of navy.  Here's my first complete spindle; after I finished it, I marked with pins where all the other spindles will go. The pins on the right will produce a spindle just like the first one, and the pins to the left will produce a longer, thinner spindle. 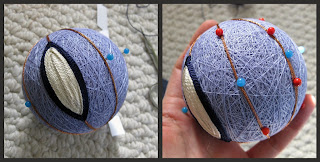 Once I've completed the whole ball, I'll take more pictures to show!
Posted by Gail at 7:00 AM