I managed to finish Hubby's shirt yesterday.  I had a couple problems, which I'll talk about, but the end product is pretty good: 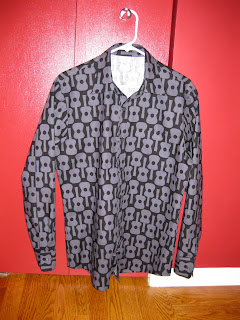 It was already getting dark by the time I finished, so I had to use flash.  And the print is so busy, you really can't make out the details!  I think it doesn't look a whole lot different than the pictures I showed the other day, except that it has a collar now.

The fit is pretty good.  The half inch I took off the sleeves ended up being the right amount, so I'm glad about that.  The slimmer fit from the little bit of waist shaping is nice too. 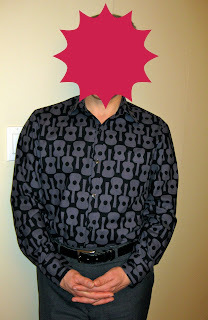 One thing I'm not so happy about is that the very top back, across the top of the shoulders, rides up into the collar when he wears it.  I didn't realize it when I bought the pattern, but this shirt has no yoke, and the back piece is flat.  That is, there is no pleat to give extra room across the back.  Hubby has broad shoulders compared to his chest and waist measurements, so he needs that extra room in the shoulders.  I think this might not be the best pattern for him, and I'll probably look for another one for the next shirt.  But I do like the two-part sleeves. 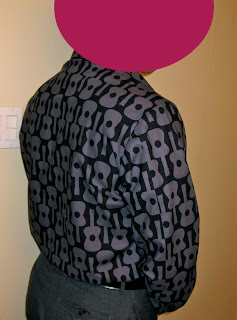 Something that I found very interesting was that there was very little fabric left over.  I'm used to using Colette patterns these days, and I guess they are more generous in the suggested yardages.  I was sweating it a little, because I had to cut the two fronts separately and offset one by about an inch and a half to get the pattern to line up.  As it is, I don't have enough fabric left over to redo anything but a cuff, so I'm glad I was really careful in my laying out and cutting!

The only real problem I had was with edge-stitching the collar.  The piece was so thick, and I was stitching so close to the edge, that when I got to the corners the feed dogs didn't want to move the fabric forward and the stitches bunched up.  I had to redo it a couple times.

I know a lot of people try to avoid buttonholes like the plague.  I rather like making buttonholes.  It's cutting them open that gives me fits.  I always seem to slip  and cut into my stitching, usually on the one buttonhole that's front and center!  This time, I decided to cut them open with an exacto knife on one of my kitchen cutting boards, and that worked pretty well.  Do any of you have any good tricks for buttonholes?

The only other thing I'm not so pleased about is that although I used a new needle, it did catch some of the threads and create pulls every once in a while, which you can see on close inspection because it pulls the grey into the black area, or vice versa.  Not really sure what I could have done about that.  Also, this is one of the heavier quilting cottons, and at the moment it's a little stiff.  I'm hoping it softens with more washes.

So, that one's done and crossed off the list.  As I fell asleep last night, I was pondering what to start next . . .
Posted by Gail at 8:14 AM