Now that you have a wrapped ball, you're ready to mark the divisions.  For this ball, I'm dividing the sphere into 8 vertical sections with two poles and an equator.

For this step, you need some card stock of at least 8.5 x 11", paper scissors, ball-head pins in 2 different colors and some very pointed scissors, like cuticle scissors.

To begin, cut a strip about 1/4 inch wide from the long side of your card stock. Fold one end back about 1/4" and stick a pin through it, then stick it into your ball: 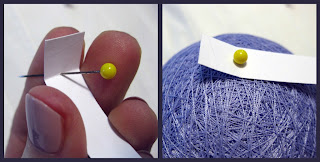 Wrap the strip tightly around the ball, trying to make sure it's centered, and then make a fold that butts up to the pin.  Once you've established the circumference of the sphere, try it out in different places:  leave the pin in place, but swivel the paper to a different place and wrap it around again.  You may find that you have to adjust the length you've marked. 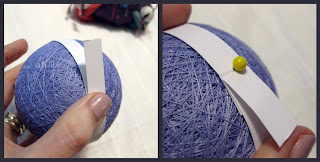 Now fold that circumference in half and make a crease: 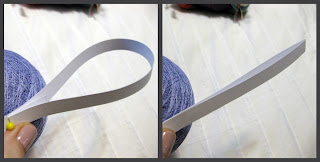 With your scissors, cut a small triangle at the halfway fold: 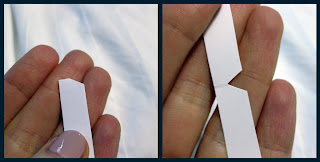 Wrap the strip of paper around the ball again, and use a second pin of the same color to mark the other pole.  Again, check this by trying it from different angles, and adjust as necessary: 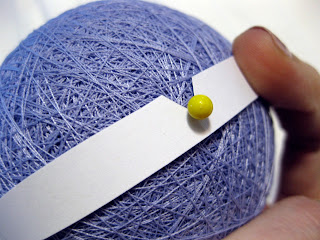 Once the second pole is found, open out the strip again and fold each half in half to make fourths.  Cut notches into these as before: 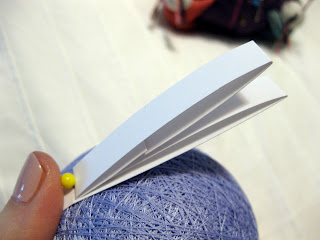 Wrap the strip around the sphere so that the south pole is centered in the notch, then use your second pin color to mark the equator where the other two notches are (blue pins in these pictures): 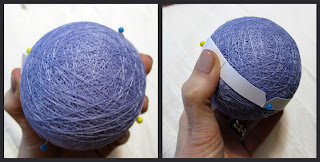 Open out the strip of paper again and eyeball where the halfway point between the first two equator pins might be; swivel the paper and mark these as well: 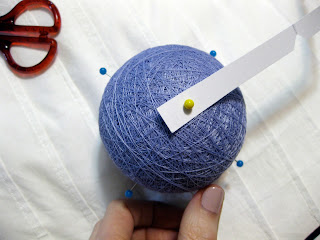 Now take your very pointed scissors and cut a small diagonal into the place where you originally pinned the paper at the north pole, then remove the paper altogether: 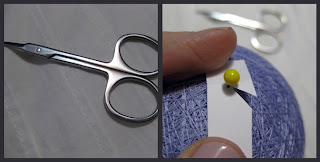 Fold the fourths in half again so that the paper is now folded into eighths.  Cut notches again.  I like to cut them on the other side this time - it helps me be more even when I'm marking the equator. 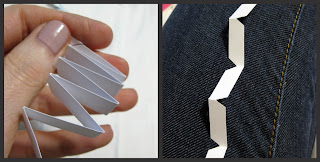 Finally, hook the strip onto one of the equator pins and wrap it around the ball, making sure the first four equator pins fall into their notches and adjusting them if needed.  Then mark the remaining four places on the equator so that you've got eight even divisions.  I usually take the strip off once I've done this and try it starting from another equator pin at least once, just to make sure everything is even; because the threads were hand-wrapped, these balls are not perfectly spherical, so some adjustments are often needed. 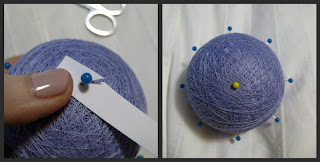 All ready for the next step!  You may need the strip of paper again, so don't throw it away until the ball is completely finished.

I hope these were clear enough for anyone who wants to follow along!


(And for those who are interested, I'm wearing Zoya Kennedy from the Feel Collection on my nails.)
Posted by Gail at 7:00 AM