I finished my blouse this morning, and I'm totally in love with it!  Unfortunately, there's not much point in taking a picture to show you, since it's so overcast that none of the details will show up in a photo.  I am planning on dolling myself up and taking some pictures tomorrow though.  Anyway, it basically looks just like it did yesterday, with the exception of the hems on the bottom and cuffs, which I did by hand using a catch stitch.  I also sewed on a hook and eye to close the back neck.  I think the instructions skipped over how to close the back, but I can't say for sure:  I didn't really read them!  The illustrations were clear enough that I could just follow those.

And just for funsies:  yesterday I showed the blouse to Hubby, who dutifully admired it.  When I told him I just had to hand stitch the hems, he said, "But it's perfect like it is."

I said, "I can't just leave it unfinished; it will unravel at the hems."


Anyhoooo . . . Work on the Still Light is ongoing.  I did a few inches on the body, then put that on hold and picked up the first pocket.  But I've since put it down; I'm making yet another hat for Hubby.  He's been wearing his Windschief hat and cowl pretty much daily since I made them, but the temps have really dropped lately, and he says the wind is getting in through the "holes" in the knitting.  (Let me just say, he's talking about the little bit of space inherent in stockinette stitch - I'm a good enough knitter that my work generally doesn't have holes unless I want it to!)  So I decided to follow Evelyn's (of Project Stash) lead and make him a two-layer hat.  Evelyn has made a bunch of these lately as gifts.  I especially like her latest one in shades of blue.  I'm using the Valley Yarns Northampton I got in the free shipping deal a couple months ago, in a shade called Merlot Heather.  Evelyn has been using a pattern by Jane Richmond, I think, which makes the hat in one piece:  one end top-down and the other end bottom up.  I'm using Elizabeth Zimmermann's Very Warm Hat pattern, making the hat once, then picking up stitches all along the edge and making it again.  I really don't enjoy making hats top down!

This yarn is having a hard time deciding what to be.  I originally bought it to make a dress from one of my vintage knitting magazines (1966), but once I got the yarn I decided it was too stiff for that.  Here's a picture: 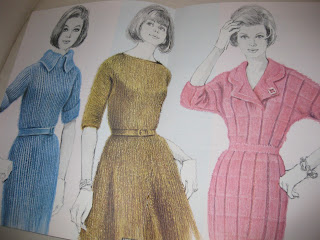 I was going to make the middle one with the flared skirt and dolman sleeves.  How cool are those illustrations?  I really love this book; I've never seen another like it. Here's the cover: 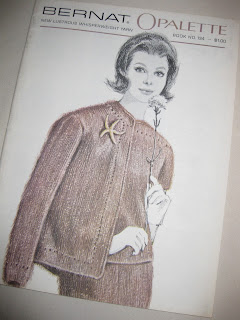 So then I decided to make a sweater for Hubby.  But when I did my gauge swatch, I discovered this yarn was much lighter than the original - I'd have to rewrite the whole pattern.  So now I'm thinking of making the Allegheny sweater dress from Brooklyn Tweed.  But I'm going to finish the Still Light dress first and see how close to spring we are.  Because I got my spring Rowan Knitting magazine the other day, and there are so many things I love in this issue, I can't wait to get started!
Over the last few weeks I've started thinking about what I might want to sew for spring and summer, and started a new page (just under the header) so I could keep track.  I've decided that with the completion of this silk blouse, my December sewing list is complete, since I want a Peony dress for spring and the short sleeved shirt for Hubby will also be a spring item.  Having that list really helped me keep on track with my projects!  I've also made a couple of changes to my winter knitting list, but haven't made a spring list yet.  I'm not really sure if I will.
On that note, I guess I'd better finally get started on my ironing!
Posted by Gail at 4:38 PM