Two qualifiers:  first, I've had a cold for about a week, so I'm not on top of my game, looks-wise; second, it's still rainy and grey here, so you still can't see much detail in the photos despite having every light in the place on and trying to brighten the photos with an editor.

But I'm excited to share my new blouse because I love it so much.  The photos really don't do it justice - it looks and feels fantastic on.  First, untucked, with pants: 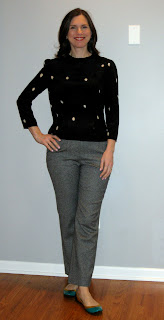 You can probably see that it's a little short.  As it is, it's probably better with high-waisted styles, which these pants are not, but I wanted to show it untucked so you could get an idea of the length.

The second picture shows the shape of the top better, but it was my test photo to see if I was standing in the right place for where I had the camera set up, so I'm not smiling.  I decided to show it anyway because you can see the shape pretty clearly, so I fixed my face a little: 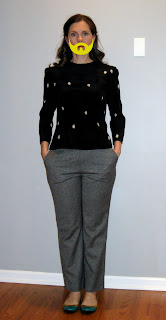 I like this style of beard because it's the kind my dad had.  Although his was black, not blond.  Until it turned grey.  Anyway, what  you've never really been able to see in any of the photos are the double pleats on either side of the center front that bring the waist in nicely.  And here you can also see the very square shape of the shoulders, about which more later.

Finally, tucked into a skirt.  I really love this random polka dot print with this particular skirt.  I have a feeling I'll be mostly wearing this blouse this way!  You can't really see it (broken record, eh?) but there is a fair amount of black and cream in the patterning of the skirt, so I like how the top mirrors that. 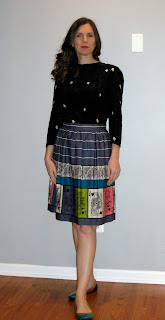 Now take a look at the line drawing from the pattern, so you can understand what it is really like: 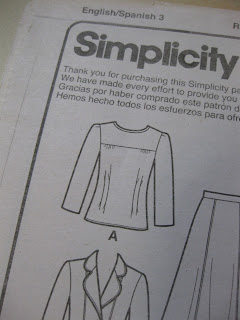 Much better, right?  That's what I get for making a top with black fabric.  Actually, that is really out of character for me:  I very rarely wear black, just because I don't think it's very flattering to my coloring.  But I really fell hard for this print.

The construction of this blouse is really easy, which is nice since I think it's done to its best advantage in silk.  I really love the construction of the sleeves in particular. I mentioned before that the sleeve heads have darts rather than gathers.  When I was making the top I discovered that you do put some gathering in after the darts are in place in order to ease in the sleeve.  Here's what the sleeve piece looks like: 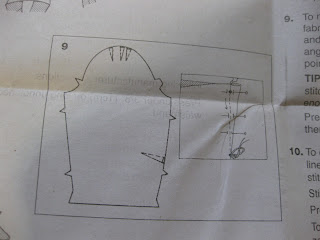 The other cool thing about the sleeves is that after you've set them in, you make a little armature (for lack of a better word - is there a word for this?) to place under the pleats to help them stay supported: 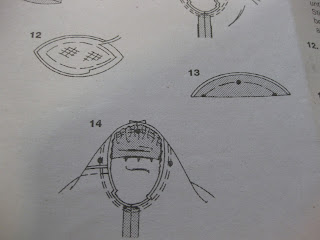 So the shoulders get that really broad, square 1940s look.  Love it!

This isn't the kind of thing I will get a whole lot of wear out of (it's a little fancy for my daily life) but I'm very glad I made it and I love it to pieces.  I intend to try out the pants and skirt from this pattern as well. Lots of people have made the pants and say the fit is stellar.

But for now, it's back to the knitting.  And maybe another Continental blouse.
Posted by Gail at 2:50 PM