The Secret of My Unsuccess

Well, on the heels of some projects I've been very happy with,  come a couple of disappointments.  Life always finds a way to keep it real.

I still haven't resolved Hubby's hat problem.  And then the other day, I made a mess of a dress.  Spurred on my my success with the Continental Blouse and encouraged by Silaibunai's lovely version on flickr, I decided to try out the Continental Dress. Despite pretty much knowing that this is not a good dress shape for my figure.  So here it is, with my unhappy face cut off: 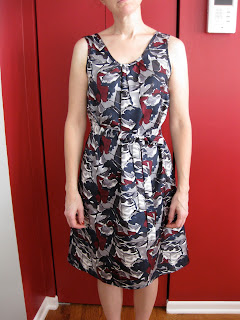 You may recognize that fabric.  The tie I made was from the leftovers of this dress. I'm not quite sure how I feel about this fabric.  My first impression when I saw it at the store was that it looked like a men's tie; my second thought was that it looks like camouflage.  But I was drawn to the colors because I have handknit cardigans in all the colors in the print, and my idea was to make a lightweight silk dress for layering with them.

So I made up the Continental, going (somewhat) by the measurements on the envelope and cutting a straight size 10 again, just like the blouse.  What you see here is my amended version; the finished dress was way too big in the chest, gaping at the armholes and neckline.  And before anybody says, "You should have made a muslin!" let me just say that I felt going in that this would be my muslin.  At $5.99 a yard, I was able to make this dress and Hubby's tie for $19.18 (which includes tax) - about the same price as real muslin when it's not on sale.  And less than I usually spend on a single tie at Macy's. 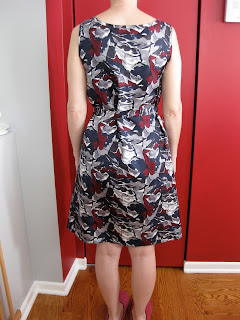 I guess it doesn't look so bad, although I'm still on the fence about the print.  But as I said, this is after I did some pretty drastic modifications.  Slap-dash modifications. We were going to a concert last night and Hubby was wearing his new tie; he really wanted me to wear this dress so we could coordinate (isn't that cute?)!  I'd thought I could just throw a sweater over it and be done, but the neckline kept poofing out and making all my business open for everyone to see.  So . . . 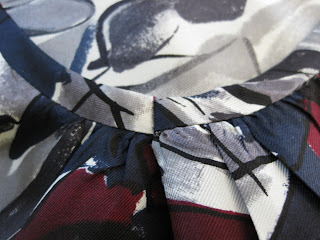 I'm not sure if you can see it, because I think the print hides it pretty well, but I made a tuck along the neckline and sewed it down using the same blind stitch as I used to close up the back of the tie.  And because the armholes were so large, I did the same thing at the top of each side seam.

Hubby likes this dress and thinks it looks good on me, but I'm just not crazy about it. It doesn't make me feel pretty or proud of my skills, so it may become something else at a later date.

For reference, I think I have a very pear-shaped body:  my bust is one size, then my waist is 2 sizes larger than that, and my hips another two sizes larger yet.  I think people generally think I'm slimmer than I am because I've learned which styles are flattering on my body shape and which aren't, and I knew that this type of dress was a gamble, although it's the kind of thing I'd like to be able to wear.  Because the size 10 worked for me on the blouse, and I needed the room in the hips, I thought I could get away with the size 10 for the dress (a size less than my usual in sewing patterns).  But for me to get a good fit with this pattern, I think I would have had to go down another two sizes in the bust, then grade it up in the hips.

Also, this dress took me far more time than I'd anticipated, because I ended up hand-stitching the bias border to the neckline and armholes.  I had already made up the pattern pieces, so all I had to do was cut it out and sew it.  I used Sunni's method of laying the slippery silk on some muslin for cutting, and that worked like a charm.  I also did French seams at the sides and shoulders.  Still, it took me 5 hours from start to finish, which I think is too much for a pattern with 5 pieces, 3 of which are bias bindings.

So:  maybe too much information, but I'm putting it down in case anyone else who is considering using this pattern can be helped by my experience with it.   I almost always search finished projects of patterns I'm planning to sew.

At least Hubby likes his tie! 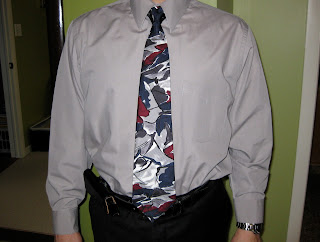 Now I'm going to console myself with some knitting.
Posted by Gail at 1:18 PM