Today I sat down and focused on the do-over of Hubby's hat.  I think this one may be a winner (fingers crossed) and if so, I'm anticipating not being able to get my hands on it again in daylight hours for photographing.  So although it was already dark when I finished, I took a bunch of pictures of my modifications, and hope they're clear enough.

I originally sat down and knitted a whole new hat, but when I got all the way to the end and was picking up my wraps and turns, they just didn't look great.  (Netflix again.)  I had already measured the hat on Hubby's head and decided that I needed to shorten the ear flap by a couple inches, so I set aside the new hat and ripped out the last two inches on the old hat and went on from there.

The next step was to pick up stitches at the top of the ear flap section from the inside and knit a second ear flap inside the first one: 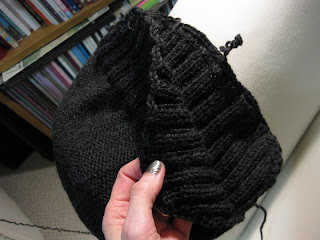 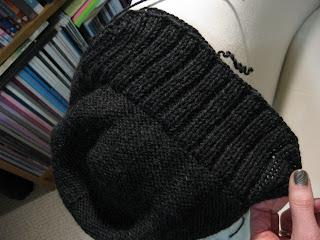 I didn't worry about weaving in any of the ends - I just hid them inside!

Next I dug into my fabric stash and got out some cotton quilt batting: 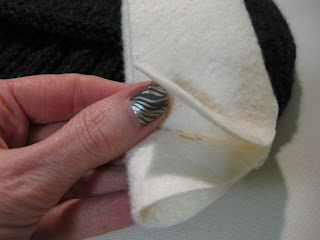 I cut a piece about the width of the flap section, folded it in thirds to fit between the two flaps,  and then rounded off the ends. 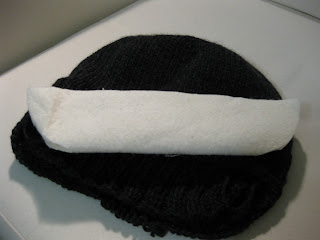 I cut this in half and tacked each half over the ear, stretching the knit fabric a little: 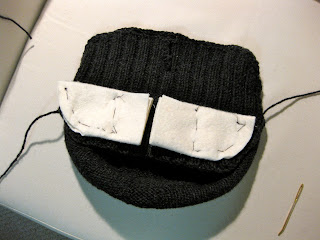 Then all I had to do was fold the two flaps together, sandwiching the batting, and sew it closed with a moderately loose whip stitch: 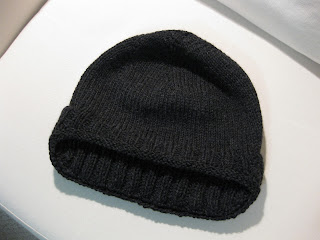 This one will be slightly less dorky looking, I think, and I'm hoping I positioned the batting correctly so that it covers his ears and keeps out the wind.  I won't know until he tries it on late tonight!  But the lined section is nice and thick: 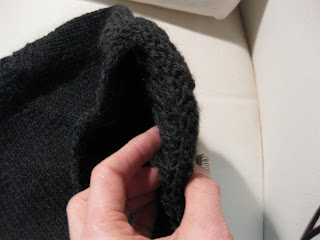 It's not likely I'll be able to get him to model it, and it's way too big for me - this one doesn't fold over like the first version, so when I pull it down onto my head it completely covers my eyes!    But here's a picture anyway, just for kicks: 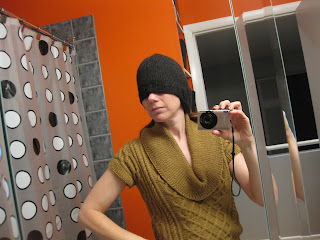 I'll let everyone know how this one goes over!
Posted by Gail at 5:50 PM