I finished the first item from my list!  I love crossing things off lists, don't you?

This morning I finished the second sleeve of my 1958 sweater, but I wasn't feeling in the mood to start the finishing, so I decided to start Hubby's Windschief hat.  Folks, this pattern is so much fun, I couldn't put it down!  I made the whole hat! 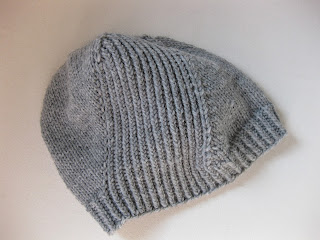 I'm really hoping I have enough yarn left over to make a good sized cowl to match.

I used Valley Yarns Northampton, a yarn I've never used before.  I ordered a bunch of it for another project a few weeks ago when Webs had their free shipping deal, and one ball of the light grey.  I have to admit I was a little disappointed when I first took it out of the box; it wasn't as soft as I'd hoped it would be.  But once I started knitting with it, I really fell in love.  I think I like it even better than Cascade 220 - it's squishier and has slightly better yardage at a slightly lower price. 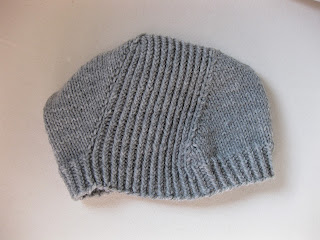 This was also my first time using a Stephen West pattern, and I'm very impressed.  I can see why his patterns are so popular.  This pattern was well-written and easy to follow.  I did change a couple things, based on my own knitting.  Technically, I ought to have made the size large for Hubby based on the pattern measurements, but the medium used the number of stitches (96) I've had success with before in this weight of yarn, so I went with that, and the fit is perfect.  And because I know I knit loosely, I did the whole thing on a size 6 needle, rather than going up to a 7 after the rib. 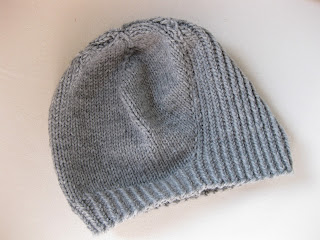 Have any of you used this yarn or pattern?

Also, I cut out the pieces for my raspberry silk Jasmine yesterday!  So there should be some sewing coming up this week!
Posted by Gail at 12:18 PM