*Nails of the 3 Days

On Wednesday morning, I switched to Zoya Kieko from the Summertime collection: 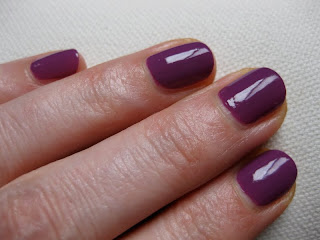 SO pretty!  I couldn't stop looking at my nails!

I think I may have mentioned that I recently bought the Zoya Anchor base coat, Armor top coat and Qtica Half Time drying drops, in an effort to minimize the shrinkage I get with Zoya polishes.  This was the first mani I used them all on, and it worked like a charm!  I had tried Zoya's Hurry Up! drops a few times before, and really didn't like them; they left my nails feeling tacky for the duration of the mani. I'm not sure if they've changed the name or formula since I bought them - the drops now listed on the website are called Fast Drops.  (Sorry for the lack of links.  I've been trying to open Zoya.com and can't get it to load at the moment.)  I was really surprised at how much better the Qtica drops worked for me.  Given that it's the same company, I really thought it would be the same thing in a different bottle. But there was a definite difference - no tackiness, and the Qtica drops seem to be more moisturizing to the cuticles than the Hurry Up! drops.

The formula on Kieko was fabulous.  I love the Zoya brush - the bristles are shorter and the brush smaller than other brands, and I find this gives me more control. Above is two coats.  This lasted really well through two days of cooking, washing dishes and doing laundry (in between rounds of mini-golf and a street festival), but I was starting to get some tip wear, so I added on a crackle:

I heart metallic crackles.
I had a lot of tip wear on my right index finger, and it's interesting to note that the crackle did shrink away from the edge because of it: 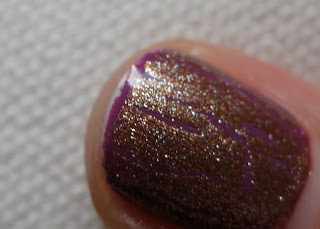 But this mani just has to get me through today.  Another busy day around here.  My nephew is returning home today.  I wish he could stay longer, but I'll be seeing him again soon when we go to Turkey.
Posted by Gail at 8:48 AM