I spent a couple hours on Tuesday afternoon watching Netflix and sewing all those snaps on Capri.  It's finally finished!  I even wore it (over my blue Sorbetto with the umbrellas!) out to dinner on Tuesday night!  I had Hubby take a couple pictures with my phone, but I just look too dorky in them to share! So you'll have to settle for seeing the sweater laid out on the bed for now: 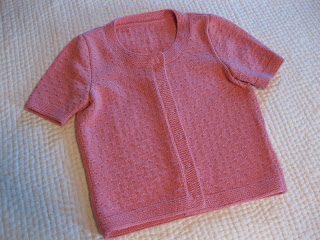 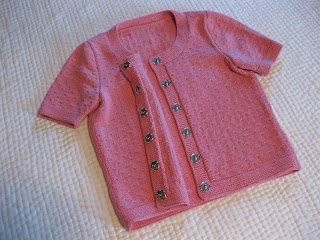 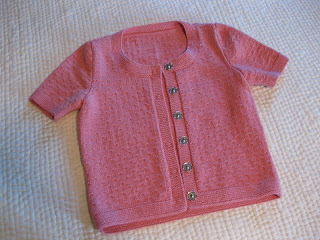 I'm quite happy with it.  And here's a fake bokeh shot of a snap:

Yesterday afternoon I painted my nails after two days of nakedness.  That was weird!  I've been doing a lot of cleaning out, getting ready for my niece to come, so I just didn't bother.  But I couldn't stand it any longer!  I went with Zoya Rica from the Sunshine collection:
And here's how it looks against my pale peach Maris: 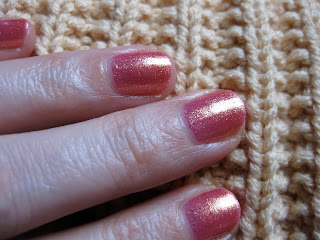 Maris is coming along.  I'm almost up to the armhole on the back.  But as nice as corrugated rib is to look at, it's kind of boring to knit.  So I'm going slower on this than I'd really like to.  And I may have started something new . . .