So, the other night, just as I was falling asleep, Hubby said to me, "What is nude, in terms of nail polish?"

"I saw it on your blog and I don't know what it means."

"It means a nail polish color that is skin colored."

I love how he is interested in my nail polish.  Every time I change the color, he always wants to see.  I don't even have to say, "Look at my nails!"

So here is some more about nudes.  As I mentioned the other day, I ordered, and received, the whole set of the Zoya Touch collection.  I did this because 1) I am a glutton for nail polish and 2) I can't figure out what my skin tone is!  Sometimes I think it's warm and other times I think it's cool.  Maybe it's neutral?  I just don't know.

I decided to start with Minka, thinking it would be the color I like least.  It has a kind of yellowish cast - not that I have anything against yellow!  I just didn't think it would look that great on me.  But I really like it! 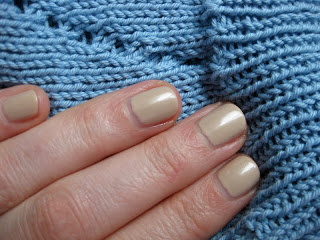 I had some trouble applying this one.  Almost at the end of doing the second coat, I noticed that the brush on this particular bottle was cut sort of at an angle, and I think that may be what caused my problems.  Otherwise, it went on nicely and was completely opaque in two coats.  I'm not sure if this is the perfect color for me, but I think it's a very pretty color.  Kind of oyster-y.  The amount of shimmer is perfect.

It's shown above against my blue Jan Sweater, but I think it looks quite a bit different against my light peach Maris sweater, more like a greige*: * Hubby and I have also had a conversation in which he asked me to explain greige.  So cute!
Posted by Gail at 7:00 AM