OK, at this point I've spent a good deal of time all weekend and again today, and I've finished up my jacket.  Hurrah!  Now to go back through all those pictures and sort them out into some coherent posts.

When last we spoke, we were at the point of making the welt pockets.  You may remember that my sewing of all the vertical seams was a way of procrastinating about this task until I had the time, energy and focus.  I readily admit that making welt pockets makes me nervous, no matter how many times I do it.  (Oddly, bound buttonholes and cutting steeks in knitting do not.)  So I never do this step unless I've got plenty of time and a clear head.

When I made my first M6172, I used the instructions given for the welt and I found it to be messy - hard to understand and a bit lumpy at the end.  I've tried a few different ways of doing these and my favorite method is the one found in Tailoring: The Classic Guide to Sewing the Perfect Jacket.  So what I'm going to show here is basically lifted directly from the book.  If any of my photos or explanations aren't clear enough, please refer back to this book as I find it to be very easy to follow.

I used my pattern piece from M6172 for the welts, and then cut them down.  You'll want 4 strips 1.5" wide by the length of the pocket bag.  Note that this will be about 2" wider than the pocket opening.  The tailoring book says to cut the strips 1.25" wide, but since they'll get trimmed anyway, I like to give myself a bit of extra leeway.  Fold them in half the long way with the right sides out and press. 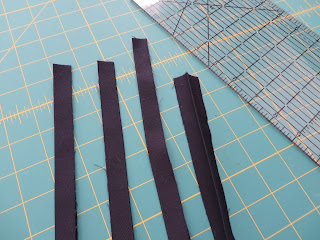 Machine stitch each of these strips 1/4" from the folded edge with a longer stitch length - I used a 3.0.   Then trim the raw edges to a scant 1/4" from the stitched line.  When you arrange the welts on your jacket front, you'll be placing those stitched lines exactly 1/2" apart, and you want a little bit of empty space in between so things don't get crowded.  The two strips below are arranged thusly. 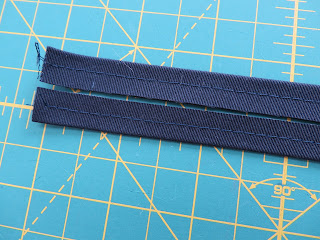 Now pin these strips onto the jacket front, placing them exactly on your welt pocket markings.  (You'll also want some kind of interfacing behind that welt.  I used a lightweight non-fusible non-woven.)  The folded edges will be at the top and bottom and the raw edges will be in the center with a bit of space in between. I only marked the ends of my welt openings - as long as your stitched lines are pinned on top of those end points, they should make a nice straight line over to the other side.  Once they're pinned in place, check to make sure that the stitched lines are exactly 1/2" apart all the way across. 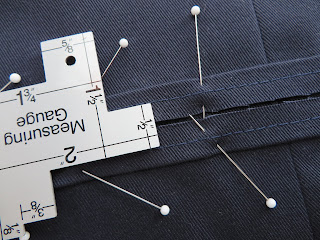 Mark the vertical ends of the welt box on top of the strips.  These marks will be your guide for where to begin and end stitching. 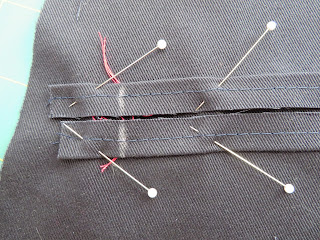 Using a shorter stitch length (I used 2.4) stitch exactly on top of the previously stitched lines, backstitching at the beginning and end and starting and stopping exactly at those vertical marks.  Below you can see that I've stitched the welt on the right. 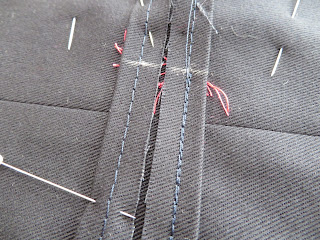 Before going any further, flip your piece over and make sure that the lines you've stitched are 1/2" apart all the way across.  If they are not, unpick and do it again.

HOWEVER:  Since this pocket will have a flap that covers the bottom welt, you have a bit of leeway.  My lines were not exact on one of my welts, and I decided to leave it to show you that you can still make a good-looking pocket in this style even if things don't match up perfectly.  My "real" self would have unpicked, but I had to complete the pocket in order to show you that it works, and I'm not that fussy.  Pick your battles, folks.


Now cut open those welts along that center line, cutting a triangle at either end that goes to, but not through the stitching.  Get as close as you can - it really does make a difference in how nicely the welt lays. 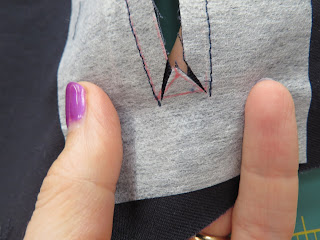 Take the piece to the ironing board and flip the welts to the wrong side one at a time and press.  Here's mine with the first welt flipped in. 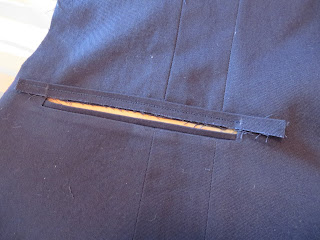 Then flip the second welt.  They won't want to lay flat right now but that's OK - just press and steam them as well as you can.  We're going to stitch them closed in a bit for further pressing. 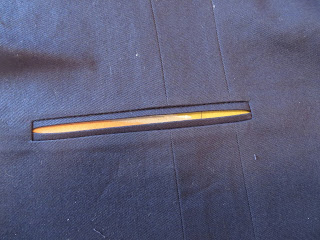 Now, if you've been exact, you won't have any gaps at the sides.  Here's my inexact welt: 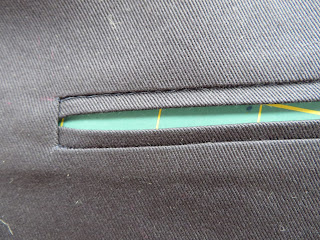 See that little gap at the left?  Without a flap this would be unacceptable.  But the flap will cover it up, so not to worry.

Temporarily baste the welt closed with some silk thread. 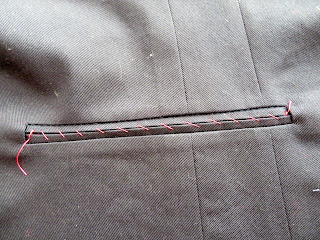 Then give it another really good press to flatten everything out nicely.

Do all of this for the other front.  Then go grab the adult beverage of your choice - you've earned it!
Posted by Gail at 6:17 PM