Cutting Out and Marking

This step is pretty self-explanatory, but I went ahead anyway and took a bunch of pictures while I was cutting out.  I have a couple quirks and tricks that might be different for you guys - the secret to my success, such as it is.

I always cut out using a rotary cutter.  I find I can be more exact than I can with scissors, since the fabric always remains flat.  Once I've cut around my pieces, I peel away the remaining fabric, leaving the pieces I've cut in position.  Then I immediately notch and mark them.  I like to do this right away because some fabrics are shifty and it's a lot harder to be exact with the markings after the fabric has been moved around a bit. 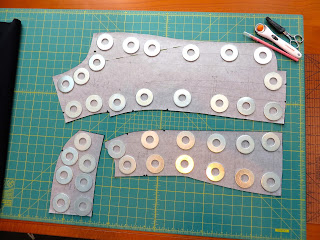 Because this pattern is a TNT for me, I transferred it to Swedish Tracing Paper so it would be nice and sturdy.  The last time I made this blazer, I got the bright idea to cut out all the circles, triangles, squares and a dotted line for the roll line - in effect making my pattern pieces into stencils for marking!  This has made marking much quicker and easier. 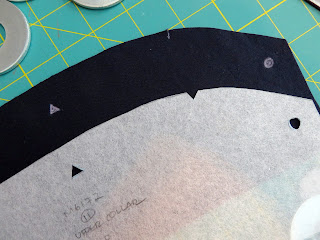 Here's the front piece with the dotted line for the roll line, and all the dots for the front dart and welt pocket before I connected them. 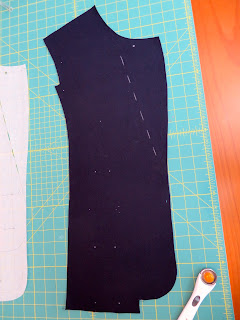 On M6172, the dart has straight legs but a curve at the top.  To transfer this curve accurately, I use my hip curve ruler.  I first place it along the pattern piece to find the matching curve: 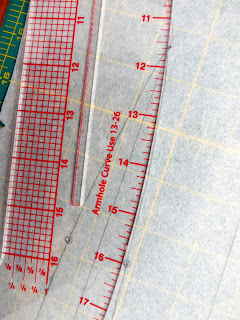 Then use that same curve to mark my fabric: 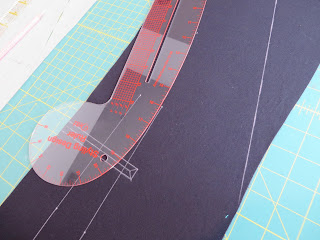 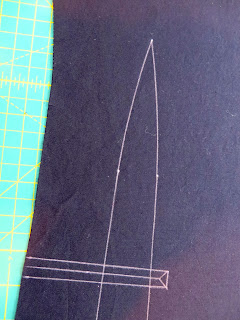 Now, you may be thinking, "Aren't a lot of those markings going to get covered up by the hair canvas and muslin stays?"  Yes, they are.  But I always put them anyway right from the get-go, because for me it's easier to just go ahead and make all the markings than to think through which markings I need to make now and which can wait til later.  If you don't want to duplicate your markings, feel free to ignore this quirk.

After all my fashion fabric is cut, I move on to the muslin.  You can see here I didn't iron the folds out of my muslin before cutting.  But I did smooth it out under the pattern so the pieces are accurate.  And of course the muslin was previously washed, dried and ironed. 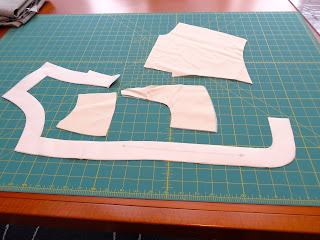 Finally, I get out my hair canvas and cut those pieces.  I always cut the hair canvas pieces single layer.  This stuff is shifty!  And you want to make sure these pieces are perfectly on grain.  The canvas I bought has red stripes every inch or so, making it easy to keep the pattern on grain.  But it's so coarse that even if you don't get striped canvas, you will easily be able to discern the grain. 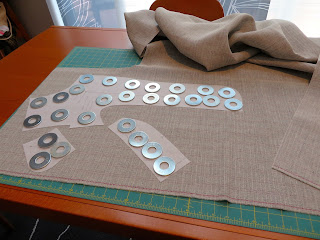 Something is missing . . .  the lining!  I mentioned before that I don't cut out the lining until I absolutely need it.  Lining fabrics always seem to be shifty and prone to fraying, and I like to avoid those hassles as long as I can.  Which won't be very long on this jacket, as I'm going to be making the welt pockets with outer flaps.

Has anyone else started working on their blazer yet?  Making pattern pieces? Fitting?  Anything?
Posted by Gail at 2:10 PM