Well, it turns out today is a sunny day after all!  This morning I convinced Hubby to take some pictures before he left for work, which means you get to see more of my plain, grey wall!  I intentionally don't hang any pictures there because it seems to be the place in our house with the best light for taking photos.  I had really wanted to get outside and do the photos there, but time was of the essence.

In order not to spam the place with pictures of my new dress, I made a couple of collages on Picnik.  I'll be so sad when that service is not available any more;  so far it doesn't appear on Google+.  Big pouty face.

I did two looks:  a fancier one for going out in the evening, and a casual one for day.  I have SO many things in my closet that go with this dress, it was a little hard narrowing it down!  It appears I like coral.  A LOT. 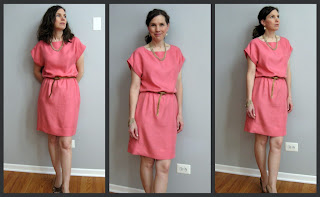 It's probably too small for you to see, but I've got on some high-heeled bronze leather slingback sandals, a bronze metallic braided belt, and plenty of gold jewelry.  The good thing about having the photos a little smaller is that you're spared seeing my veiny old-lady hands too closely.  I've had those old-lady hands since I was a teenager.  Sigh.

Here's a back view.  In the photo on the left, notice that the facing is flipping out a little.  The pattern has you tack the facings to the dress at the shoulder and just under the arm, rather than stitching it all the way around.  It mostly stays put, so I'm not really sure why it's flipping here.  You may also notice that I got about 8" of hair cut off!  Today it's in its natural "wild child" state, since I was in a hurry. 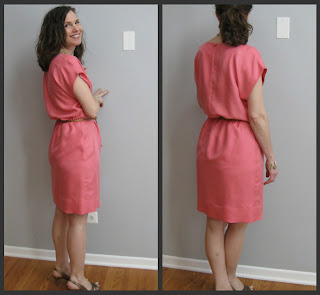 Moving on the the casual look, I took off the heels and jewelry and added a scarf and some bronze metallic leather flip flops.  I actually prefer this look! 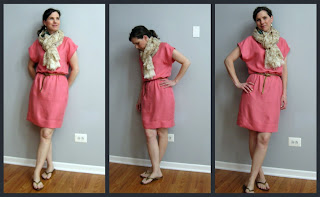 I like the center photo:  I'm looking at a big dust bunny on the floor!  Maybe a little less knitting and sewing, and a little more housework is in order?

So, do I like the dress?  Yes, I like it.  I LOVE the color and the feel of the silk.  My workmanship is still not as fine as I'd like though.  This silk twill was easier to work with than some of the others I've used, but it's clear I still have a way to go before I master silk.

I used the step-by-step tutorial on Pattern Runway's site.  Odd that someone who loves words as much as I do will generally choose to just look at the pictures rather than read the instructions!

The only thing I did differently from the pattern was to add a casing for the elastic, rather than sew it onto the seam allowance on the inside.  But now I'm wondering if that was a good idea - the gathers tend to shift when I move very much, and not always in a figure-flattering way.

So there you have it.  I was so glad to get this off my guest bed after looking at it in its half-finished state  for the last two weeks.  And if this weather keeps up, I may even get to wear it soon!  But not today:  it's laundry day again!
Posted by Gail at 1:59 PM