I'm making headway on my crafty to-do list.  Today's task was to finish up the Jasmine I took apart a few weeks ago.  You may remember I'd planned to turn it into a camisole.  And so I did; it's still not perfect, but it's better than it was, and at least I can use it as an under layer for something. 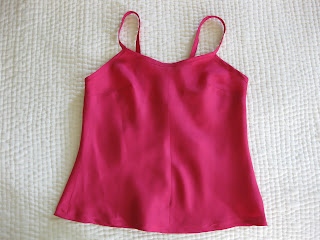 Here's what I did:

1.  Made bias tape out of some of the remaining fabric.  Started with an 11" square, and then learned that it only works with even numbers.

2.  Starting from the top of the V-neck, took in 3" at center front, tapering down to nothing at the hem.

3.  Tried it on and with soap, traced a camisole shape on the front.

4.  Took it off and cut open the shoulder seams, then cut along the camisole tracings and cut out a curve along the back.

5.  Applied bias tape to the edges, starting from the right top, across the back and ending at the left top.  Then separately applied the remaining tape to the center front section, letting the tails extend to become straps.  Ended up with a bias tape seam just off center in the front and decided to ignore it.

6.  Tried it on and discovered the bias tape made the underarms flare.  A lot.

7.  Took in tucks at the back where the straps attach, to take up excess. 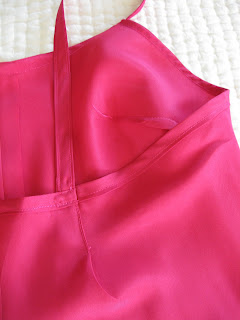 8.  Called it a day and crossed it off my list!

And now I can continue with item number three on my weekend list, which is making some headway on my sweater.  I'm about 2/3 done with the collars (yes - plural) and maybe 5/8 done with the belt.  Getting closer!
Posted by Gail at 2:14 PM