I spent the last two weeks knitting like crazy, but didn't want to let on because I was making a secret Valentine for my sweetie!

I've had a bunch of burgundy Valley Yarns Northampton in my stash for a year or so, left over from my Allegheny dress.  I'd been planning to use it to make Hubby a sweater but hadn't gotten around to starting it.

Then, a few weeks ago, he was wearing the charcoal grey Seamless Hybrid with Shirt Yoke (Elizabeth Zimmermann) that I made him several years ago.  And he said to me, "Where's my burgundy sweater?  Don't I have a burgundy sweater like this?"

Now, I hadn't told him that I was planning on making him a burgundy sweater, but when he said that, I decided to get on with it, and set myself the goal of finishing it by Valentine's Day.  I wasn't sure I could finish it in time, but with a couple hours of knitting each day while he was at work, I managed to get it done. 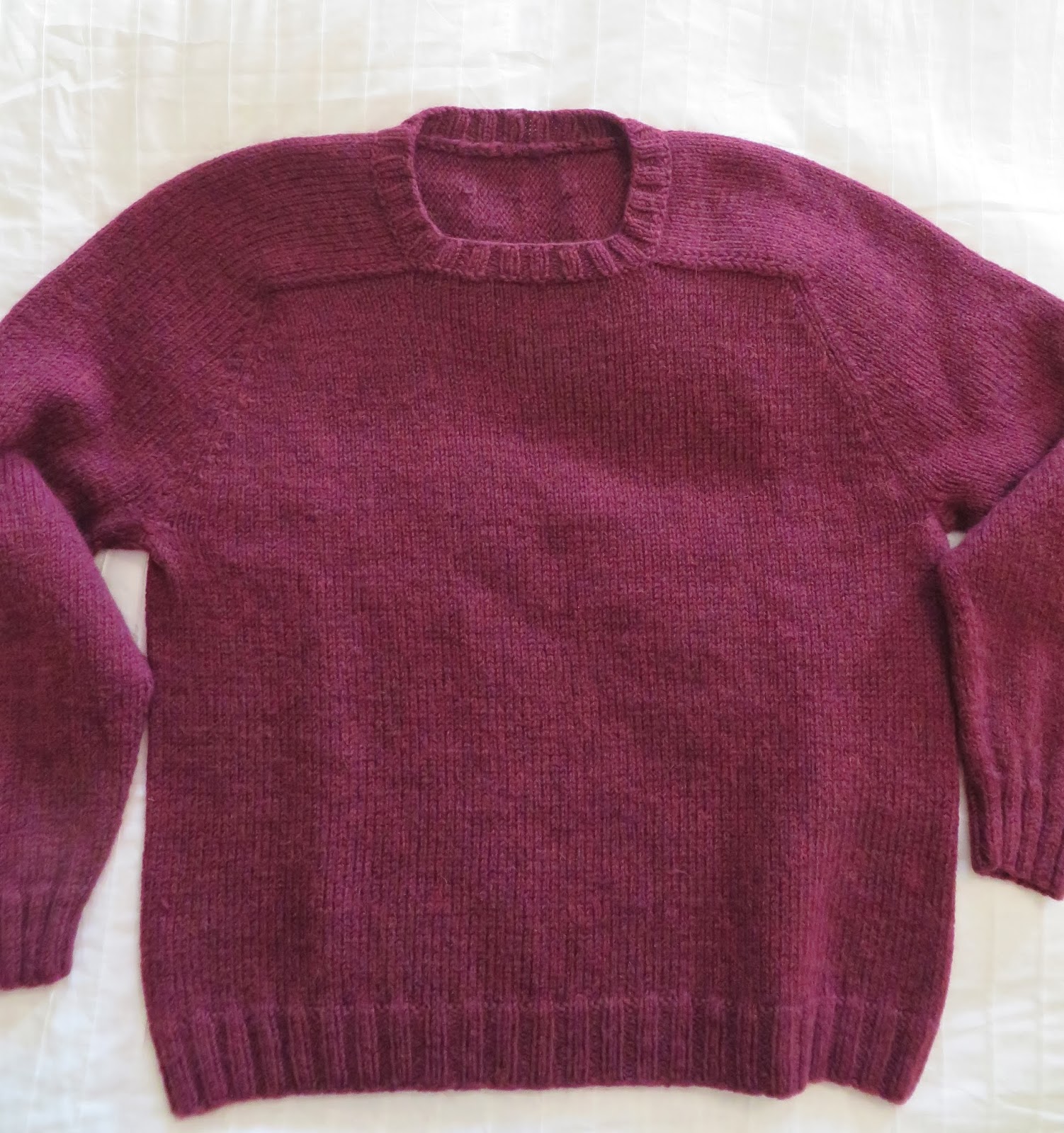 I finished it on Wednesday, which was a good thing as for once I did a wet-block and needed the extra time for it to dry.  Because of my fast and furious knitting, my tension wasn't as nicely even as it could be, so I knew that my normal steaming wouldn't even things out enough.  Because I hate shifting a huge mass of wet knitting around, I blocked it in my front-loading washing machine, using the 30-minute cold water pre-soak cycle.  Once that cycle finished, I turned the machine off, then turned it back on and did a drain and spin on the lowest spin speed.  It took about a half hour for it to spin out, but once it was done the sweater was barely damp - much more water had been extruded than if I'd dried it with towels. 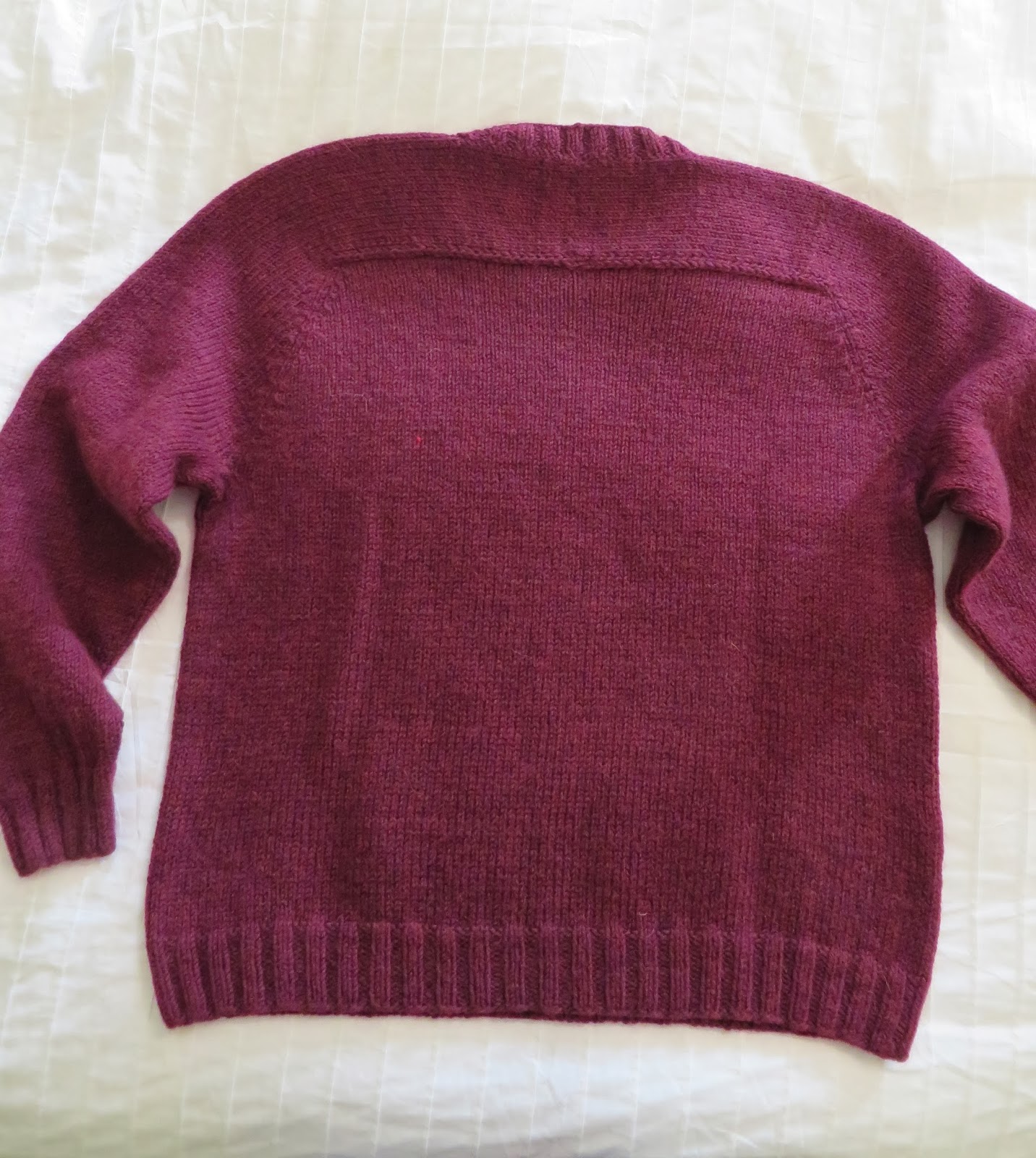 I really love this EZ design.  It's a combination of a raglan and a saddle-shoulder sweater, with the saddle continuing across the upper back to create a yoke.  The body and sleeves are knit in the round, bottom up, then joined at the under arm.  At that point it's a LOT of knitting on the needles, but the decreases are fairly rapid, and once you get to the saddles it's very quick. 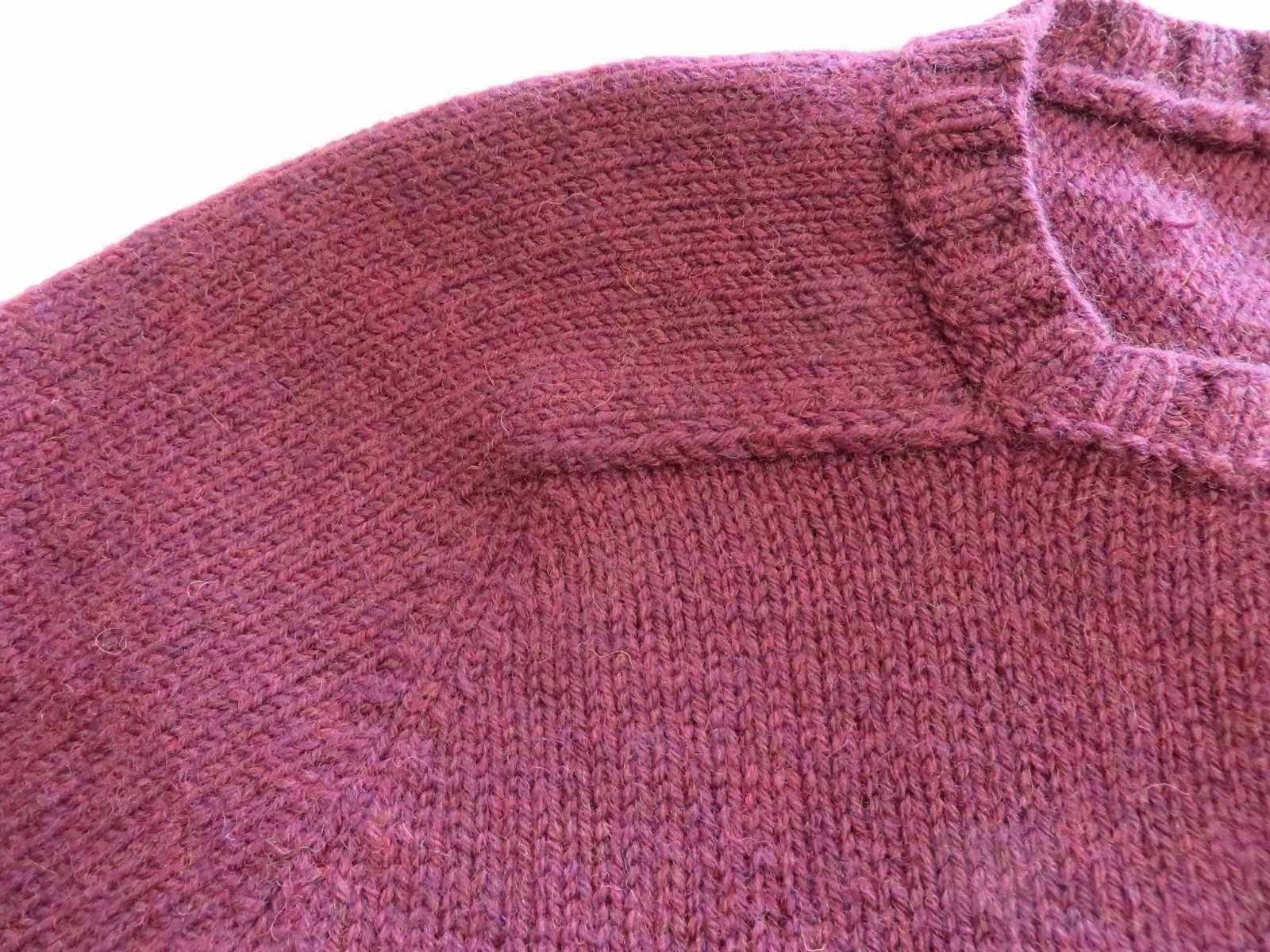 When I picked up my neck band stitches, I purled the first row before starting the ribbing, just because I like the way it looks. 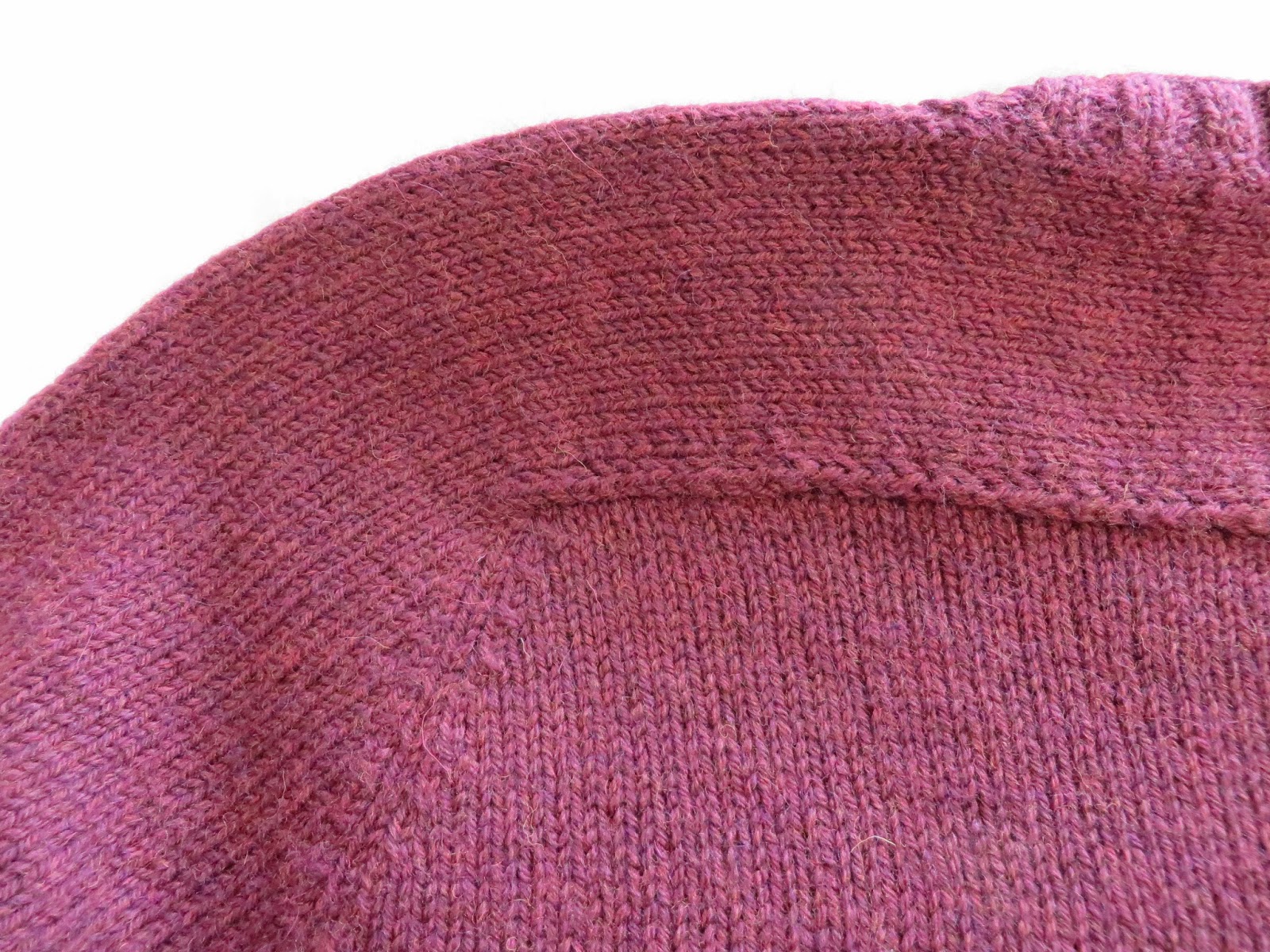 The paired decreases for the raglan on this sweater were done with a knit stitch in between, but on his first sweater I did a *slip, knit 2 together, pass the slipped stitch over* double decrease, to create a more dramatic line at the raglan.  I like both looks.

We don't normally exchange gifts on Valentine's Day, so Hubby was really surprised when he got home and found a present waiting for him.  When he opened it and saw his new sweater, he was so pleased that he put it on immediately!  Which made me really glad I'd spent the last two weeks knitting like a crazy woman. 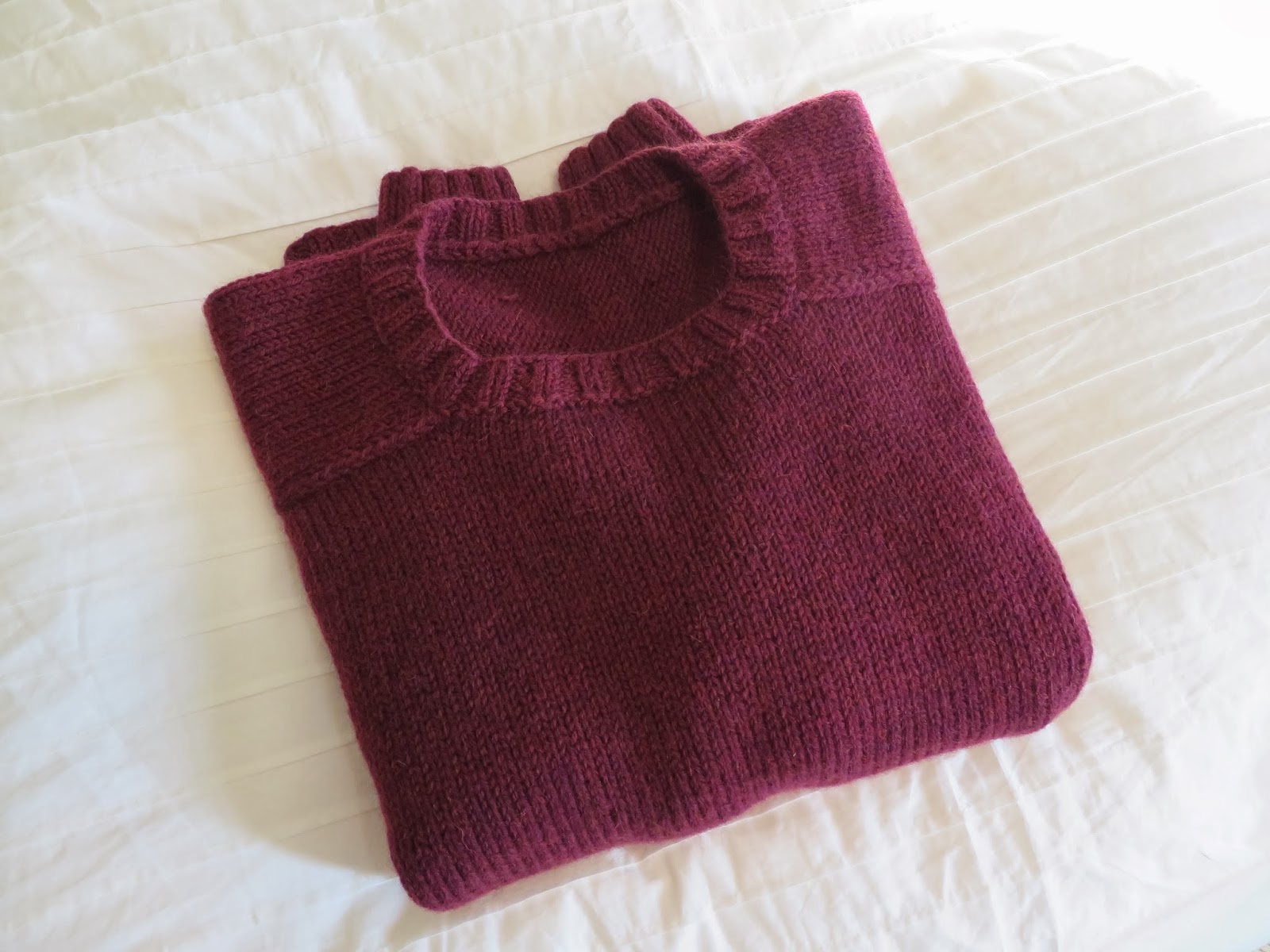