I'd originally thought I wouldn't write up a post about fitting, only because fitting is such a personal experience.  That is to say, the fixes my body needs are likely not the ones other bodies need, since we're all shaped differently.  But two things changed my mind:  firstly, there were several comments asking for this post.  And secondly, when I was looking back at my Pants for Real People book after I'd finished, it seemed that there really aren't that many different adjustments one can do to pants, which I think is good news:  it's not as hard as we all think it is.

Another reason I'd thought not to write a fitting post is that my method was very unscientific.  For all my talk about taking flat pattern measurements and comparing to my RTW jeans and TNT Clover pattern (all of which I did), in the end, what really got me to a fit I was happy with was making up the pants and pin-fitting them to my body.  Same as when I made the Clovers two years ago.

So I think from here on out, my process will be as follows for pants or jeans:
1) choose the size that corresponds to my biggest measurement
2) make the pants
3) pin fit
4) adjust the pattern to match garment

So, it's not really difficult or arcane.  It just requires a willingness to take the time to do it.  After sewing up my jeans, I tried them on and adjusted the seams four times before I felt I was happy with them.  It took me 3 - 4 hours on a Saturday morning.  Not a huge investment of time really, considering I shouldn't have to do such an intense fitting again.

I should also mention that except for having Hubby take pictures of the front and back after each alteration, I did the fitting on my own.  So I don't think you really need an extra pair of hands to accomplish this.  In fact, I think fitting a pair of pants is probably easier to do by oneself than a bodice, because you can reach all the areas!

I'm going to share those pictures I had Hubby take.  I really hadn't planned on sharing them - it was just easier for me to see in a photo what was going on than in the mirror.  So the pictures are heavily cropped because I was only wearing a bra on top!  But I think you can get the idea of how the fit transformed.  At each step, the changes don't look very dramatic, but the difference between #1 and #4 is pretty significant.

Also:  I say I "pin fit" but really, the only thing I pinned was to close the fly.  At each stage, I pinched out some fabric and eyeballed how much needed to be taken out, then went back to the sewing machine and sewed a new seam by that amount.  After the body photos, I'll show the seams so you can see the changes I made.

It's probably helpful to know that I started out with a size 42 to accomodate my hips, my biggest part.  My waist falls into a size 38; however, these don't come all the way up to the waist.  In the end, I found it was easiest to start from my bigger size and take away in the places where I needed it.

Here is how they looked straight out of the box, with no alterations: 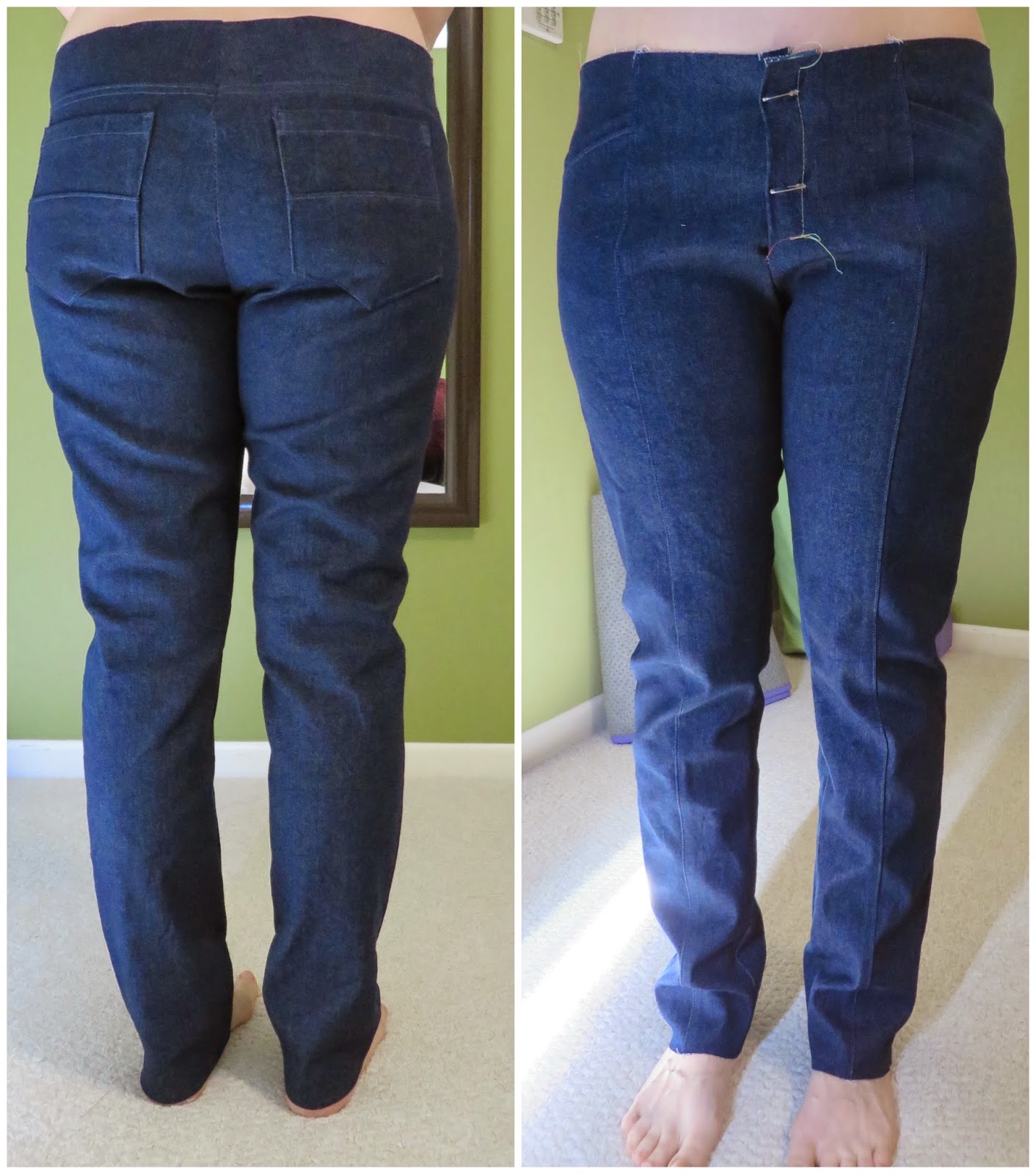 Not too bad really!  I knew I'd have to lower the C-curve and take a wedge out of the center back, so I did that: 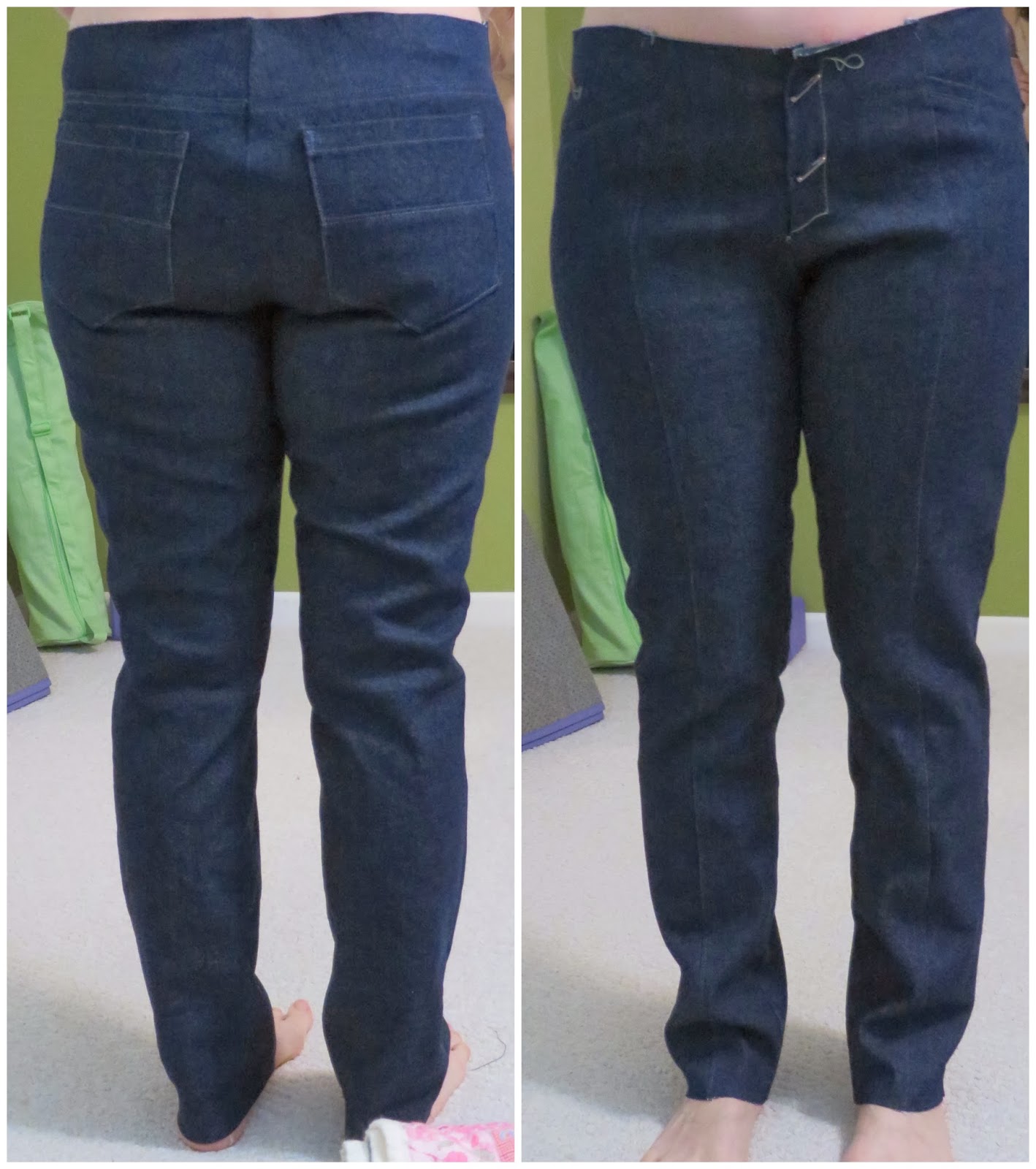 Then I refined the angle of that wedge at the center back, so I didn't have a piece sticking out over my coccyx. 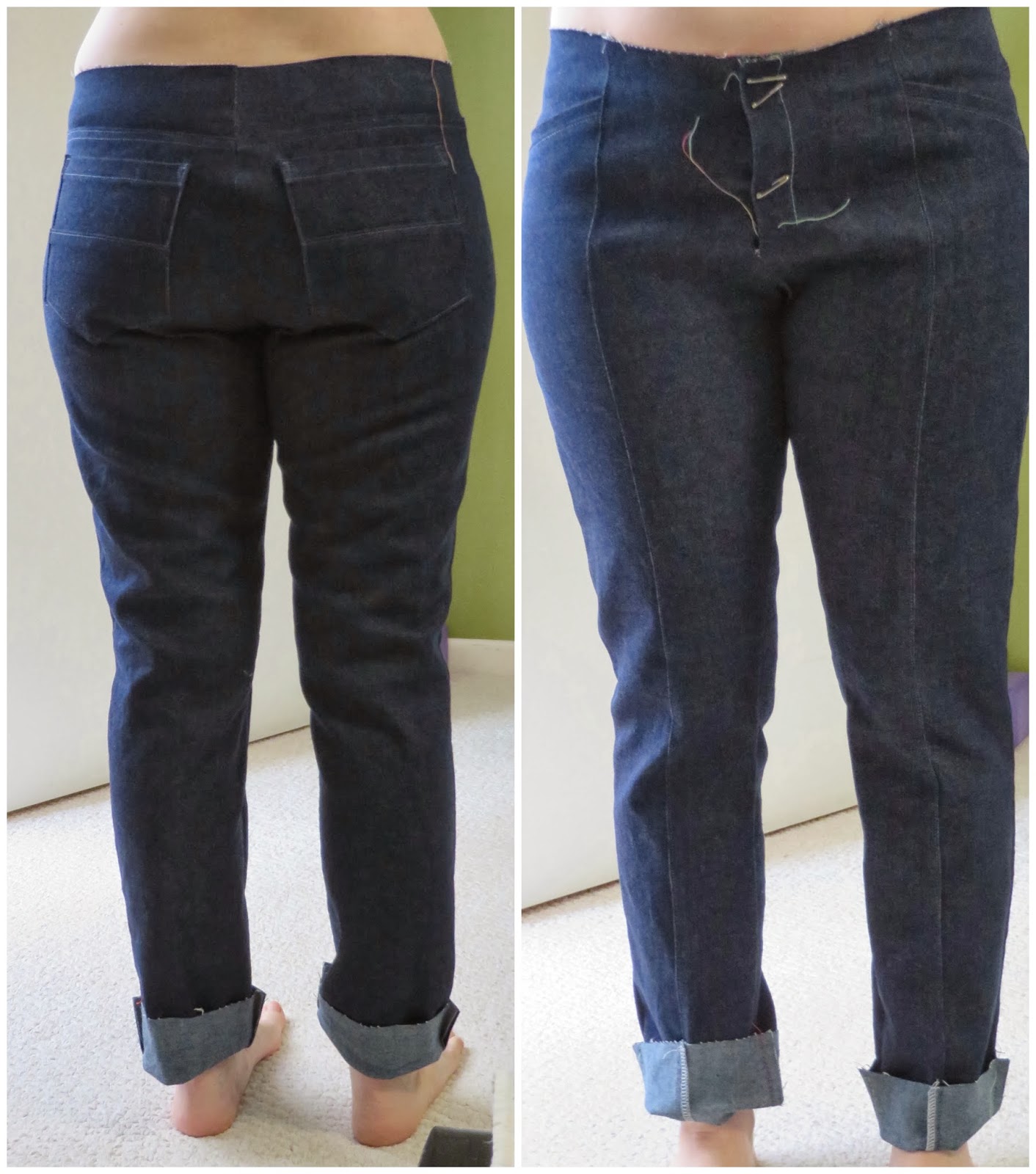 And finally, I took in a bit at each side seam, and also took in a bit at the top of the inseam, which helped a little with those C-level whiskers.  They show up better here than in yesterday's photos, but adding the waistband and a belt helps lift everything up so that it's not as dramatic in the finished jeans as it is here. 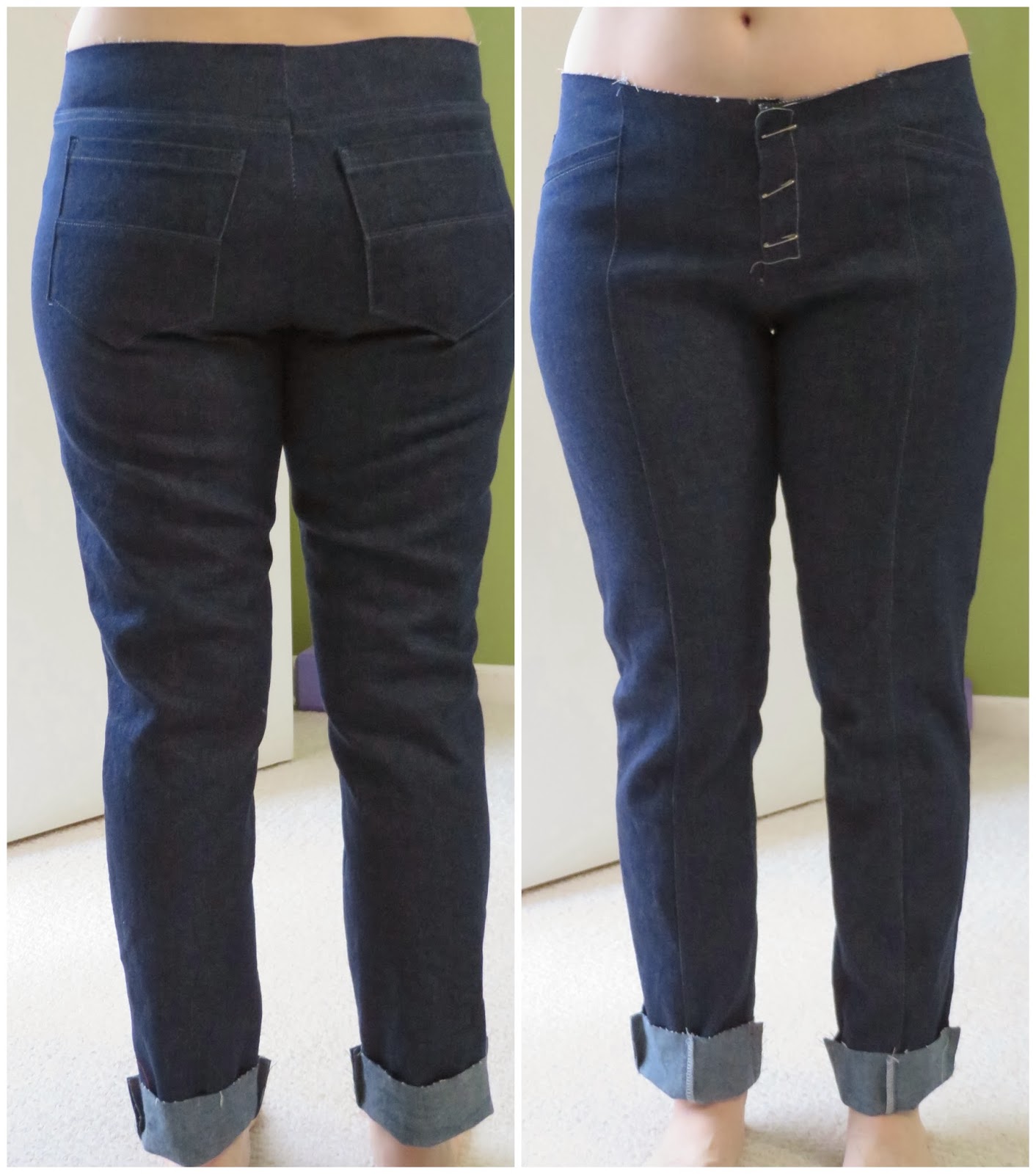 Now, here is how the C-seam looked after all those refinements: 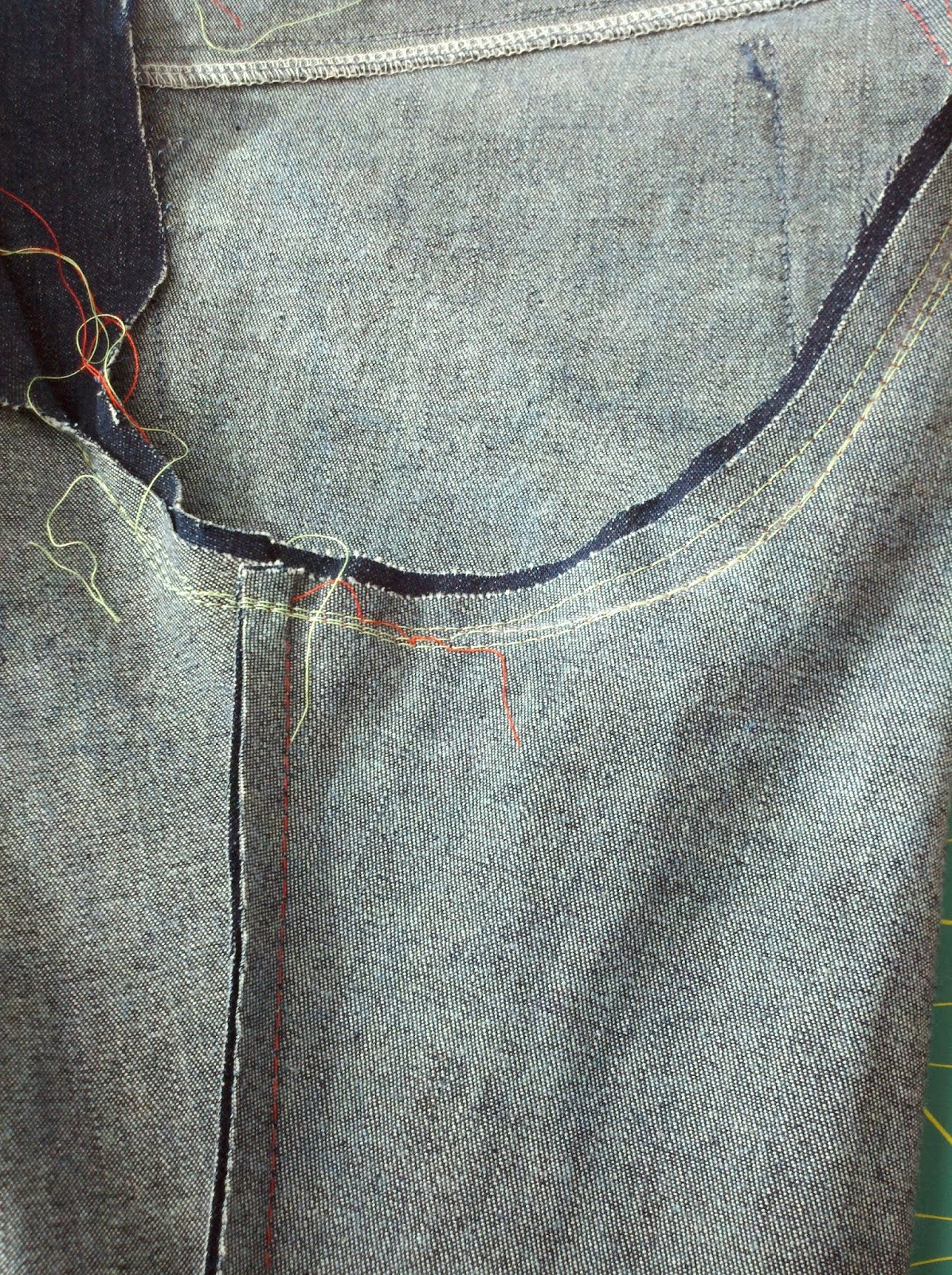 The stitching closest to the edge is the original (pattern) seam line.  You can see that the changes here were incremental.  In contrast, the amount I took out at the center back was significant: 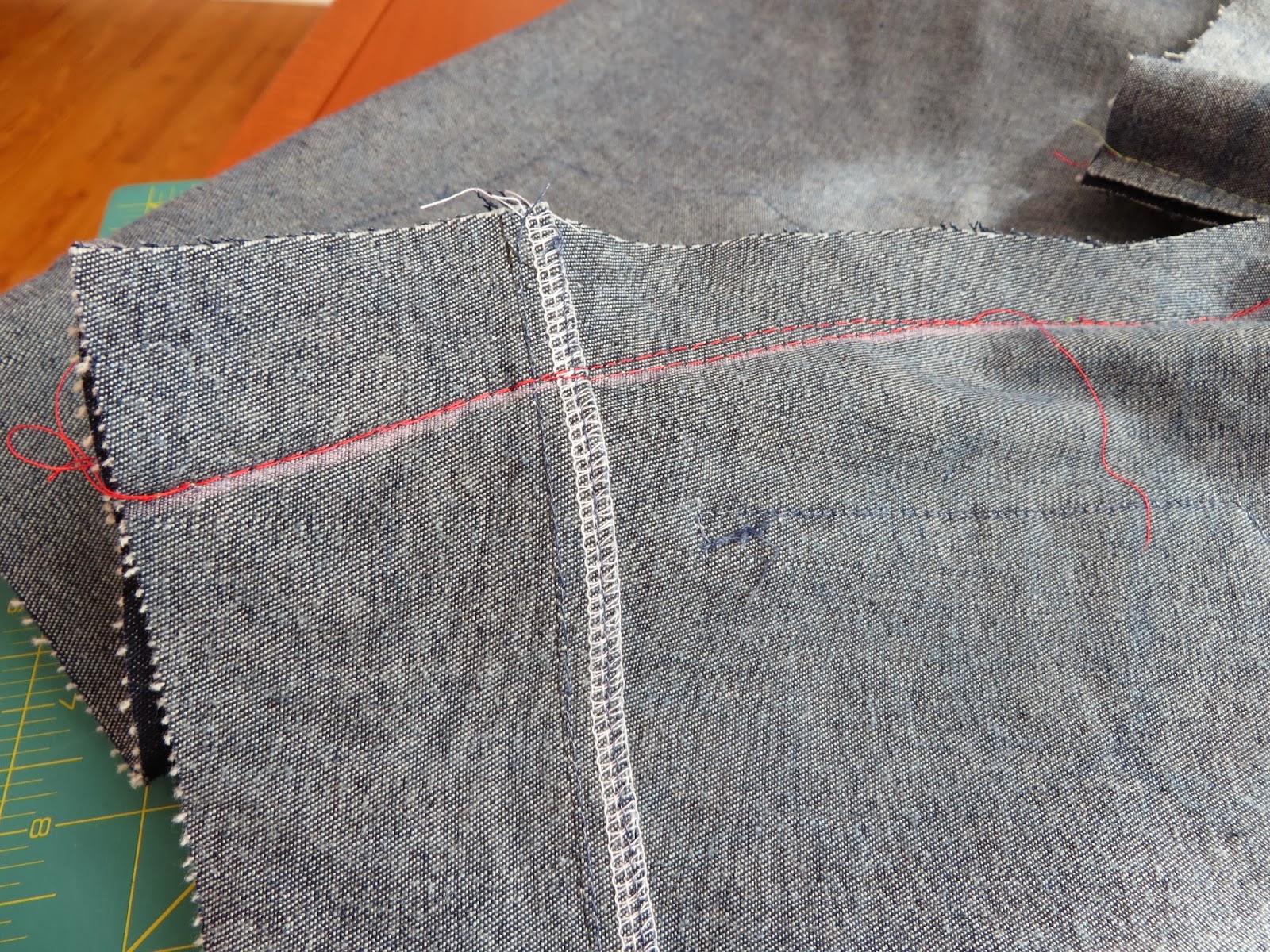 Once I had the fit the way I wanted it, I did two things:  first, I used my marking pencil to draw in my new seam lines on the fabric.  It ended up being to my advantage that I forgot to baste my pants together with the seam allowances on the outside:  I think I got a better idea of the fit, and I was able to draw the new seam lines on the wrong side where I needed them to be.  Then, I placed my pattern tissue over the jeans and drew in where the new seam lines were.

I should back up a little here.  I sewed the jeans together at the inner leg seam and finished that seam.  Almost all the fitting changes happened at the center back, C-seam and side seams.  So those seams were basted with contrasting thread so that I could see and remove them easily.

Then I opened up the side seams so I could lay the leg pieces flat, and transferred the center back and C-curve changes to the tissue.

Here's a picture of my penciled-in new seam lines.  I didn't trim away the extra until after I'd sewn the C-seam and tried the jeans on one more time. 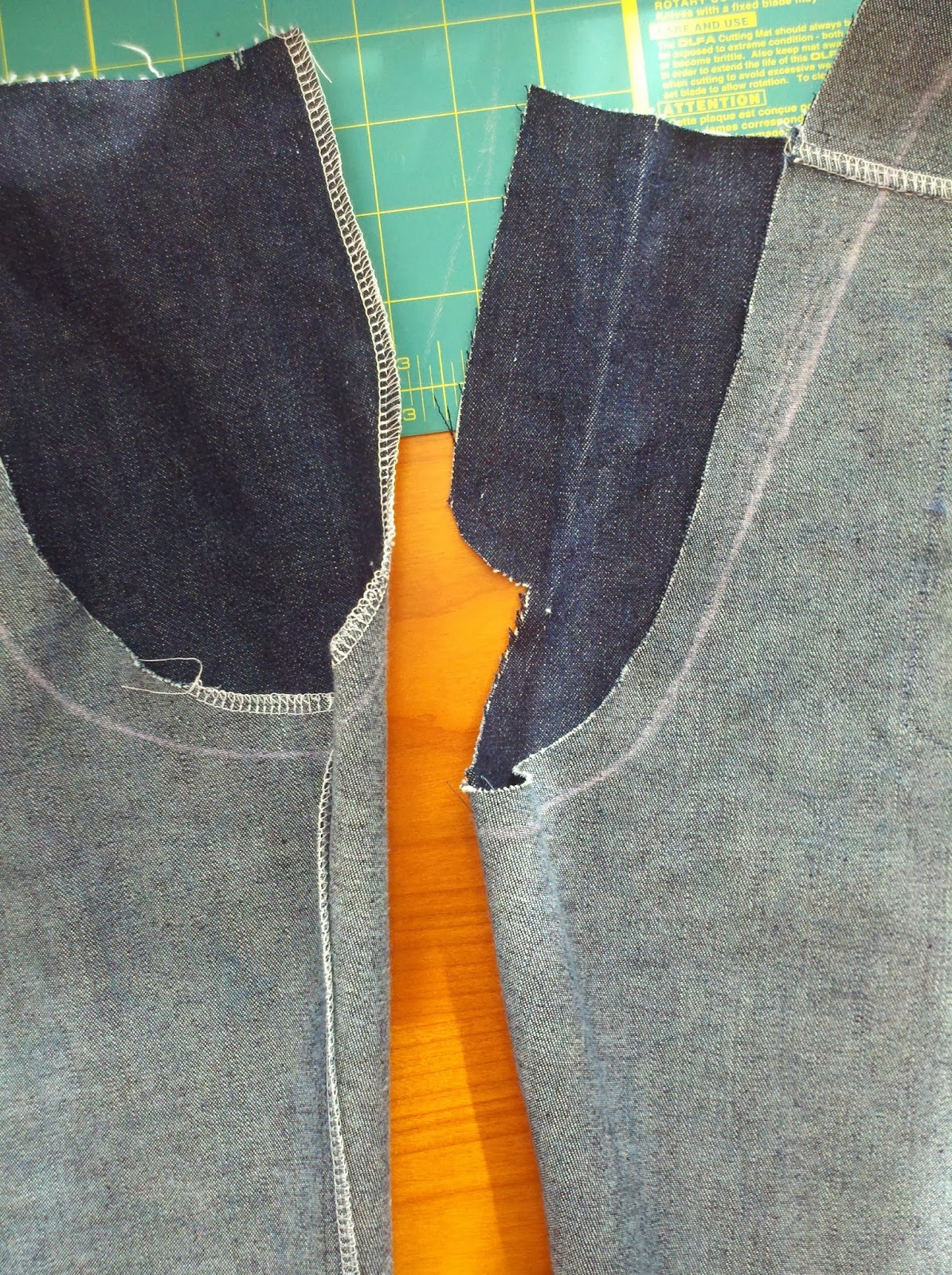 I did make a couple of changes to the leg before even starting, and didn't adjust them at all during this fitting process.  From the get-go, I took 2" off the bottom of the leg.  I did it that way rather than shorten it mid-leg because the place where the knee hit was about right for me.  Because the jeans continue to taper a bit below the knee, cutting off the bottom meant that I already had a bit of extra width at the ankle.  Having received advice that the calves are snug on this pattern, I gave myself the extra room I mentioned yesterday by adding another 1/2" at the hem line before taking off the 2" on the bottom, and connecting that to the notch at the knee.  I did this at both side seams on the front and the back.

As I said, I spent 3 - 4 hours on Saturday doing all the fitting.  And then I put the project aside until the next day.  On Sunday, I spent about an hour unpicking all the basted seams, marking the seam lines and transferring them to my pattern.  Then I was ready to sew them together for real and continue on with the finishing.

So the whole process really wasn't so terrible.  And I found that I already had a lot of clues about what needed to be done from the way my RTW pants fit:  I always find myself wishing I could take a big wedge out of the center back, and a bit out of the sides.

After I made my first coat last spring, I felt a big boost in sewing confidence.  And after I made my third coat this fall, I started to feel like I can sew whatever I want.  Things like coats and jeans used to seam like far-distant goals to me.  But lately I've had the attitude that with RTW, somebody has to make those things.  And if they can do it, so can I.

And if I can do it, so can you!  So if you are one of the people who think that sewing your own pants is beyond you, I encourage you to think again.  Pants aren't hard to sew.  If you can put a zipper into a skirt, you can put a zipper into pants.  If you can follow instructions to sew a dress, you can follow instructions to make pants.  Just give yourself time:  don't expect to get a good fit right from the beginning, and be willing to make as many adjustments as necessary.

And be willing to fail (although you likely won't).  Be willing to mess up a length of fabric in the name of experimentation.  If it doesn't work out, you can always cut the fabric up to make bags or other small projects!