I haven't had much time or inclination lately to do a lot of sewing.  But on Wednesday I got the bug, and I had a free day.  So I made up a dress I've been thinking about for a long time:  a lengthened version of the Dixie DIY Ballet Dress I've made 3 times already (one of which I never even blogged).

When I made my last Girl Charlee order over the summer, I bought 3 yards of Olive Green Solid cotton/spandex.  My aim was to make a dress similar to one I had about 20 years ago (yikes!) and wore to death - just a simple, olive green, mid-calf length t-shirt dress.  This fabric was billed on the GC site as midweight, but of course it's not that heavy.  Can you tell I'm getting discouraged with their offerings?  So many times the fabrics I've received have not been what I thought I would be getting.  But I digress . . .

I read a lot of reviews before buying the Ballet Dress pattern that said the sleeves were quite wide. I  know that Dixie updated the pattern a while ago and slimmed them down.  But I decided to use the 3/4 sleeve pattern from the Renfrew tee, mostly because I had never bothered to trace the longer sleeve from the Ballet Dress pattern and the Renfrew sleeve was sitting there, ready to go.  I did walk the sleeve cap around the armscye before cutting, to make sure the two would go together, and it's a perfect fit! 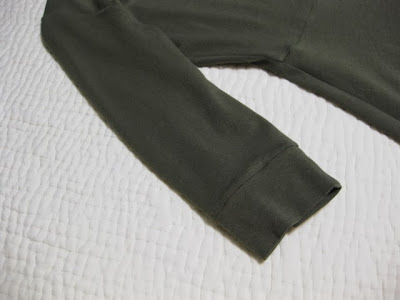 To lengthen the skirt, I extended the center front and side seam lines by a lot - 14 inches, because I wasn't really sure how much longer I wanted it to be.  After the dress was put together, I ended up chopping off three inches, then turning the hem back by 1.25".  I fused Fine Fusible Knit Stay Tape to the hemline before turning it back, just to see how I liked it.  And it did give me a nice, firm yet flexible edge for hemming.  I chose to do a zigzag hem rather than coverstitch because I had a little bit of thread left from another project that was almost the same color. 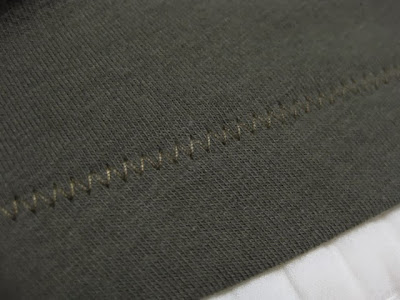 The rest of the dress was constructed entirely on the serger.  The only other change I made was to lengthen the neckline binding like I did before, to 19.5".  I see in my notes from that dress that I ought to have increased my swayback adjustment, but didn't remember until after the dress was done! 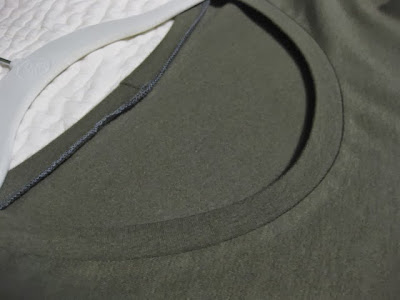 The shape of the dress is just what I had in mind.  I only wish the fabric were a little heavier; it clings to all my lumpy bits and is more revealing than I'm comfortable with.  I chose the least revealing photo, and I'm wearing tights and a slip underneath: 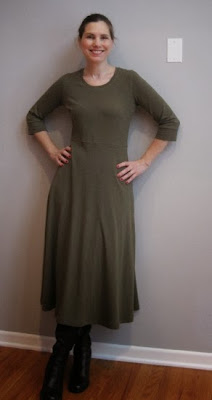 Still, it's a good dress for layering with my knitwear, like this: 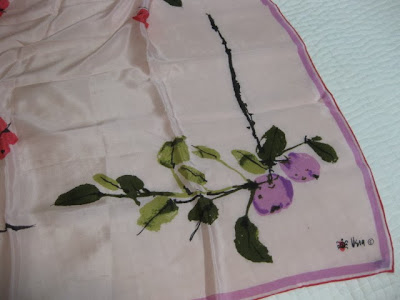 This is one of my collection of vintage Vera scarves.  I've probably got about 45 of them at this point.  I just love her artwork.  This one is quite large, and all silk. 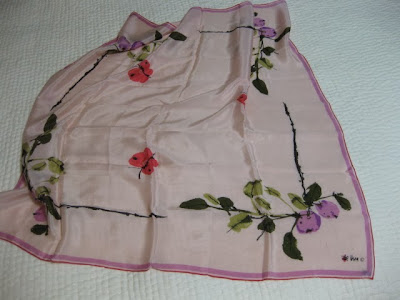 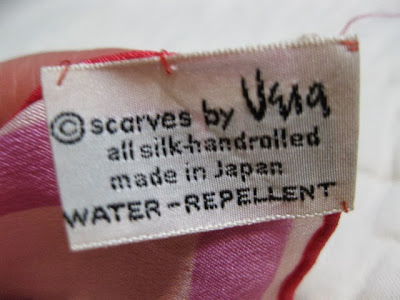 Lately it seems all I want to do is knit, and I've succumbed to a bout of Start-it-itis.  But I did manage to finish something, and took photos today while I had this dress on, so I'll be sharing that one tomorrow.

Do you guys ever try to recreate garments you had years ago?  I usually shy away from any of the styles I wore in the '90s, but the original dress (from Tweeds mail-order catalog - anybody else remember that?) was such a simple shape, it's really pretty timeless.  I'd like to do this dress in other colors, if I can find some heavier knits to work with.