Whew!  Where have I been?  Well, I've been steadily crafting as usual, but just didn't have a whole lot interesting to show for it until Thursday night, and then I didn't have time or energy to post until now!

I've been knitting away - the cool, cloudy weather we're having is perfect for that.  I finished all the pieces of my Shimmer cardigan on Monday, and they've been sitting ever since.  I just haven't summoned the will to sew those raglans together to work the neckline!  So meanwhile I finished the pair of socks I had started on our San Francisco trip.  And I started knitting an Auden sweater using the yarn from last summer's ill-fated Saffron cardigan.  I really hope this pattern ends up being "the one" for this yarn - it's my fourth try!  Nothing else really seemed to work!

On Tuesday I made 3 more feathers for my quilt, and on Wednesday I finished watching the Making Leather Bags Craftsy class for the second time and started a little leather clutch.

On Thursday I bought some lovely fabric for my weekend sewing project:  Hubby's requested shirt.  But I also made up a couple of framed clutches that have been on my list for quite a while.

Ever since I came across this post, I've been wanting the same exact purses, so a while ago I bought a little of each of the Dear Stella prints needed to make them.  I followed the linked tutorial to create my own pattern - I knew I wanted my bags to be slightly deeper and more square than the ones shown, so I adjusted my measurements accordingly, and I'm very happy with the shape my pattern produces.

I decided to make two bags and do a little experiment.  For one I used leftover quilt batting and for the other I used fusible fleece on the back of the outer pieces.  I wanted to see what the differences were in the finished product.  I was really hoping that I'd like the batting version most, because I have a LOT of leftover batting laying around!  But I ended up perferring the fusible fleece, so I'll be using that for future bags.

Here's my first bag.  This is the one made with batting.  The bag is nice, but it lacks stability - it kind of falls into itself when empty.  You can see that the sides are a little crumply.  For the outside I used Piper Stripe, and for the inside I used Patterned Dots.  Such fantastic colors and designs on these Piper prints! 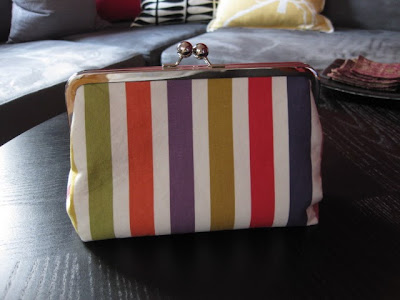 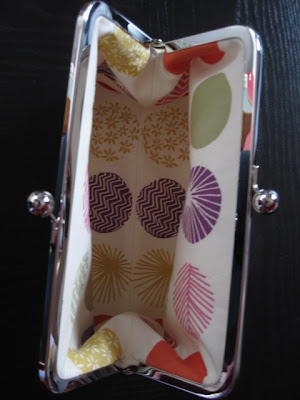 For my second bag, I used Queen Anne's Lace in purple for the outside, and Sprinkles for the inside.  This is the one using fusible fleece, fused to the back of the outer fabric.  Look at those crisp, stable sides!


And here are the two of them side by side.  The difference is slight, but I think it's visible in this photo: 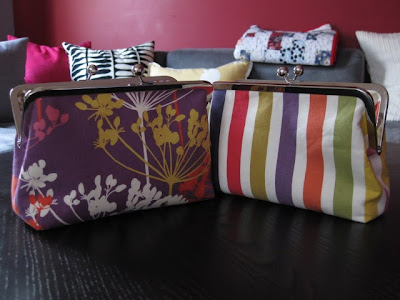 Both my purses were made to fit 8" x 3" frames.  I followed the sewing instructions in the Dear Stella tutorial, which was a different method than I've used in the past but which I think gives a superior result.  The stability of the bag made with fusible fleece made it possible for me to insert the purse into the frame without having any of the glue seep out - a first for me!  The glue I use is Beacon 527, which I've been able to find at JoAnn's.

I can see making lots more of these, even though I don't really have a use for them!  I just love them so, and they're very fun to make.  Perhaps I'll need to open a little shop . . .