Again, more for me than for you!  But maybe these notes will come in handy for someone - you never know!

I did indeed finish my dress today, but it took a lot longer than I thought it would, mostly because I decided to do a fair bit of handwork.  But as I mentioned yesterday, my Lonsdale adventure started over the weekend when I made my muslins.

I almost didn't make a muslin at all - Sewaholic's body measurements for size 6 match mine exactly, so my first tendancy was to just make up a size 6 in that Maasai Mara fabric I've been talking about (I'll show it to you soon!).  But I love the fabric so much I decided I'd better play it safe.  And wouldn't you know:  the size 6 was a bit large overall!  Whew - bullet dodged!  But not before I spent a fair bit of time pinning here and there, trying to make the size 6 work, LOL!

So on Sunday I started over with a size 4, and the fit there was much more to my liking.  I'd noticed the need for a swayback adjustment on the first muslin and was hoping that going down a size would eliminate that, but no.  So I went ahead and did the darn thing - a first for me!  Rather proud of myself actually . . .

During all this muslin-making, I started thinking it might not be a bad idea to make a test run of the dress first in a non-precious fabric.  My reasoning here was twofold:  of course I didn't want to ruin my cool Maasai Mara fabric, but I also had some doubts as to how well quilting cotton would work for this dress given that the bodice and straps are self-lined.  Then I remembered a piece of cotton lawn I'd purchased about a month ago and decided it would make a great Lonsdale: 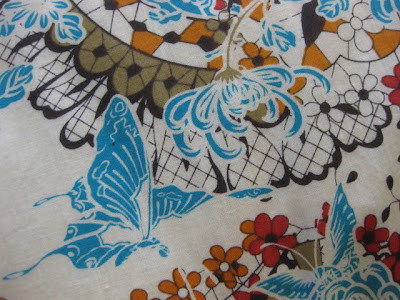 When I started cutting out my fabric for the dress, I realized it was much more sheer than I'd originally thought, so I decided to underline the whole dress.  EXCEPT the straps - I wanted those to remain as fluid as possible.  In the top picture from yesterday's post, you can see that I extended the underlining up onto the straps only about 2", so there's a little structure where the knot is but the rest of the strap is very soft.

Because I changed my plan mid-stream, I had to run to the fabric store yesterday to pick up more batiste for underlining the skirt and the right color zipper.  I've really become a convert to underlining, so I bought 5 yards, which I washed when I got home.  And that meant that before doing anything this morning, I had to iron all five yards . . .   And then cut out the skirt and pocket pieces and baste them to the fabric pieces.

Instead of following the instructions from the pattern envelope, I followed the instructions in Tasia's Lonsdale Sew-along.  This is a very easy dress to construct and most of the information was not new to me, but I did learn about using stay tape on the top edge of the bodice to keep it from stretching - a really great trick!  The posts in Tasia's sew-along are so thorough that I think even a novice sewer could follow along and make this dress.

Before I decided to underline the dress, I'd thought I'd do a turn-and-stitch seam finish instead of serging, just for something different.  But once I had a couple layers of fabric I felt it would just be too bulky, so I went with serged seam finishes again.  I also wanted to keep as much of the length as possible on the skirt, so I serged along the bottom edge then folded it back just a little and worked a hand catch-stitch for the hem. 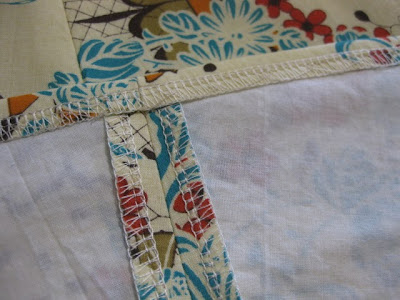 For some reason this fabric has a '70s vibe to me, so I thought a longer skirt would be fitting!

And finally, I did something I've been wanting to try out for a while:  a hand-picked zipper!  I really enjoyed doing this and think I'll be using the technique again in the future.  I've always preferred the look of invisible zippers, and they are the easiest to install I think.  But I've been so intrigued by the hand-picked zippers I see around the interwebs, so I'm really glad I gave it a try! 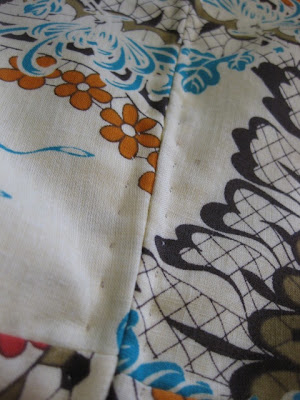 A couple other details:  it took me a while to figure out that if I was underlining the skirt, I also needed to underline the pocket piece!  I'm really happy with how the pockets came out - understitching used to be my nemesis, but I'm getting better and better at it.  And I stitched the inner waistband down by hand rather than do a stitch-in-the-ditch.  Somehow, having a fair amount of hand-stitching on a garment makes me feel like it's more special. 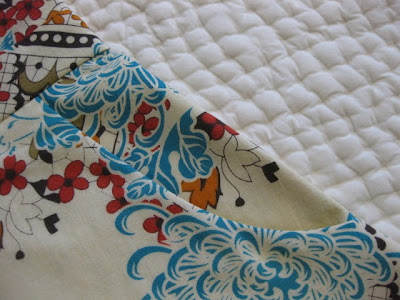 And here are a couple shots of the dress.  I realized once it was done that I couldn't hang it on a hanger to take a picture, so I laid it out flat on the bed.  Needless to say, I'm not ten feet tall, so I couldn't get the whole thing in the frame at once!  I will NOT be adding hanger loops - those things drive me batty!  I always cut them out of RTW dresses.  I'll have to figure out a good way to store this dress. 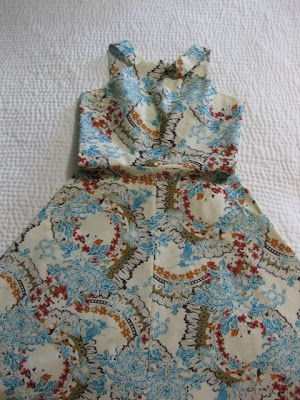 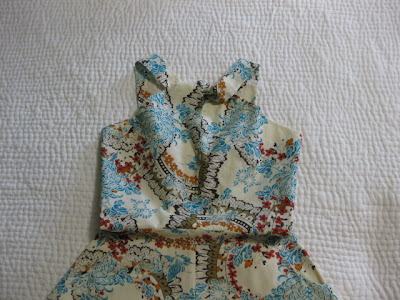 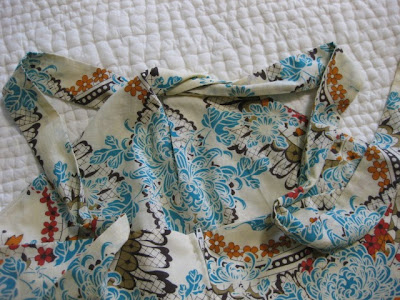 Now my only problem is that I can't actually put this dress on by myself to take pictures!  Well, I can put it on but I can't tie the ties in the back.  So I'll have to wait til Hubby is around to dress me, LOL!  I'm hoping to be a little analytical when I wear it, to really take note of the weight and drape of this fabric before deciding whether or not to make another with the quilting cotton.

Meanwhile, if you've made this dress, did you use quilting cotton?  And if so, was it fluid enough?  I'm worried about the bow tie being too stiff and creating a huge lump in the middle of the back that would make it very uncomfortable to sit back against anything!
Posted by Gail at 4:56 PM