A few weeks ago, Lisa posted a super cute top she made using the Scoop Top (free downloadable) pattern.  It reminded me that I'd downloaded the pattern a while ago and even printed it out, so over the weekend I got busy making one.

I had a cute fabric I'd purchased in a Girl Charlee sale last fall just because I liked it.  No idea what to do with it!  But when the Scoop Top pattern came out I thought they'd be a great match for each other because my fabric was also a tissue-weight burnout.

And after I finished that one, inspired by Lisa's print-mixing, I got into my box of leftovers to see if I could find two pieces to make a top like hers.  Sadly, everything I found was either too small or didn't coordinate with anything else.  But I did have a piece left over from that Sophie dress that was big enough for a whole top - so then I had two! 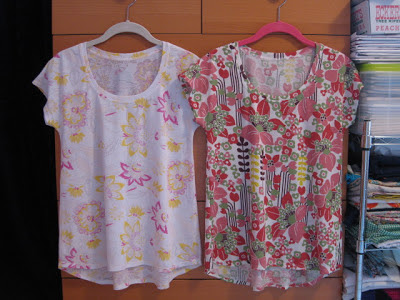 And I also found a large piece left from my very first Renfrew, so on Monday I used it to make up a third one, because I wanted to take pictures of how things work with the coverstitch machine  Some people had expressed an interest in how that works?

This is one of those free patterns that is only available in the size of the person who made it.  The pattern says "size S/M."  The whole time I was making the first one, it looked enormous and I was sure it would be too big, but when I put it on it was a little on the tight side!  Have I ever mentioned that I stink at spatial relationships?  For reference, I generally wear a size 4 top in RTW, so I would call this pattern a solid size Small.

The only change I made was to bring the neckline up by about a half inch.  I probably would have been fine leaving it as is though.  And because I changed it, I had to change the length of the binding piece.  I measured my new neckline (minus seam allowances) and then multiplied that number by 7/8 to get the length I needed. 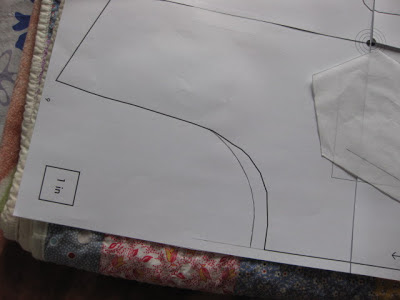 Did you note the slight high/low hemline?  Hubby has dubbed this the "Butt Crack Avoider,"  LOL!  You can see why I love this man!  And he's not wrong! 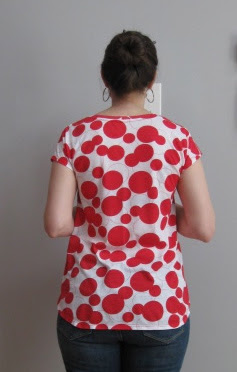 Here I'm trying to show how the front and back come together at the side seam to give kind of a shirt-tail effect:

1.  Sew shoulder seams with stay tape on the serger, then press open.
2.  Sew together short ends of neck binding on the serger, press open and then fold in half lengthwise with right sides out and press.
3.  Apply fusible web to sleeve, front and back hemlines: 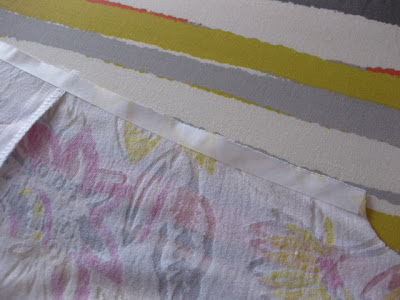 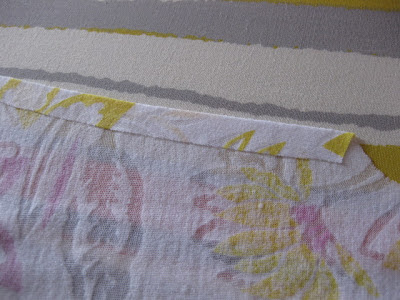 5.  Coverstitch all four hems (sleeves, front and back): 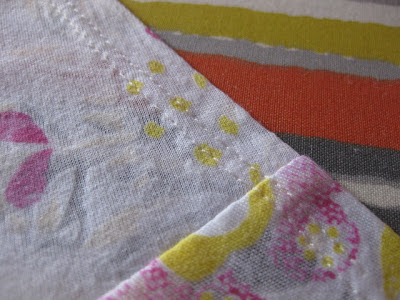 6.   Sew the binding piece to the neck opening with the serger.
7.  Coverstitch the binding seam allowance down: 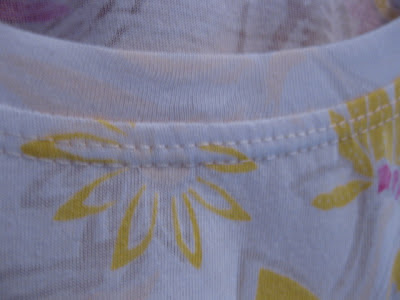 8.  Sew the side seams with the serger.
DONE!

The pattern comes with a pocket piece which I left off because all my fabrics were pretty busy.  But if you were adding the pocket, you would do that any time before sewing up the side seams.

This pattern is a winner for me - I'm sure I'll be making up more of them.  And it only takes a yard of fabric!  Have any of you guys made this one?  Are you tempted?
Posted by Gail at 7:30 AM