But doesn't my new dress kind of remind you of a chiton?


Of course, my shoes are way better than anything available in ancient Greece.  Also, I have arms.  But no chariot.


Anyhooo . . . This is McCall's 6744, a pattern I first saw on Kathy's blog a month or so ago.  Her version made me want the pattern - you know, like right away.  So I picked it up at the next pattern sale.  And then of course, did nothing with it until last week. 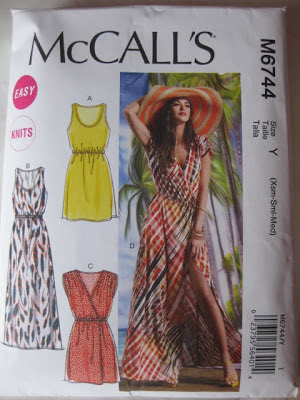 I wasn't able to find that many finished versions of this dress online, but the other one that struck me was Mimi G's.  Both Mimi and Kathy said the pattern was easy peasy and could be sewn up in a few hours.  So naturally, I found it to be a royal pain!

A big part of my frustration was that I wanted to be able to use my new coverstitch machine on it, alongside my serger.  But the way the dress is constructed, you really need to do a lot of the stitching with a regular sewing machine (especially if you don't want to draft separate elastic casings, which of course I didn't).  Somehow, having three machines out and switching between them was a deal breaker for me - just way too tedious.  So I ended up sewing the entire thing on the sewing machine except for the neckline edge.

But that's a great thing if you love this design and don't have a serger or coverstitch machine - the instructions are completely geared toward using a sewing machine.  The side seams are done as "double stitching" - two rows of stitching 1/4" apart: 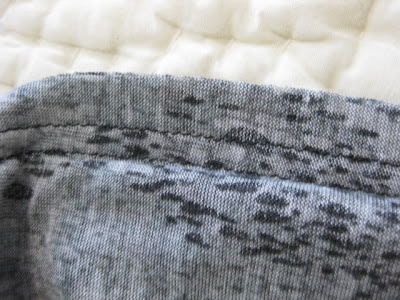 There's a lot of room for variation in this pattern.  I chose to use the bodice of View C with the skirt from View A - the slight overlap provided for the wrap skirt on View C is insufficient for Chicago winds. 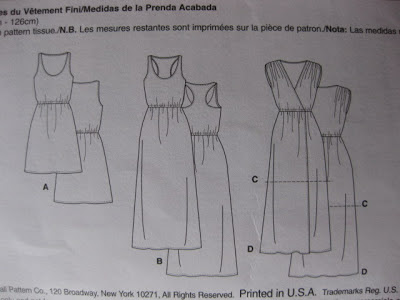 The reason I did so much internet searching for finished versions of this dress was that I had a hard time deciding which size to make.  If I go by the body measurements on the envelope, I'm a S at the bust, M at the waist and L at the hip.  I considered going down a size overall, but my fabric has very little stretch, so in the end I went with a straight size S.  What helped me come to that decision was measuring the skirt of this dress I made last fall.  I like the fit of that one, and I've found that going a little slimmer in a knit dress than I think I ought to actually makes it more flattering and less like it's swallowing me up.  The skirt on my Sophie dress measured 38" and it skims my hips nicely.  The finished hip measurement on the pattern tissue (and verified by my measuring tape) for the size S is 43.5" - I definitely didn't want to go any bigger than that.  Size-wise, I think I made the right decision.

I much prefer this dress belted, and I also admit that it's not the most flattering thing from the back:

But I still like it.  And since there's a deep V-neck, Hubby quite liked it!  Boys - they're so predictable!  To ensure my own comfort and modesty, I ended up sewing that faux wrap closed - wrap tops have never worked for me.  For some reason they just don't stay closed. 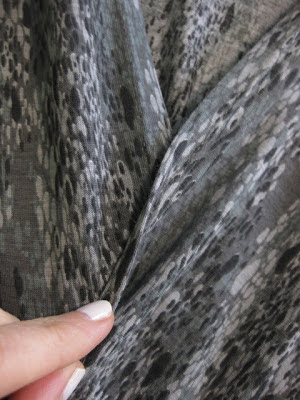 The fabric is an Ella Moss rayon jersey from Girl Charlee (still in stock and now on sale!).  I bought this in three colorways last fall because I really liked the print, but was very disappointed when I received it because it was so thin and had very little give.  But it works for this pattern, since it sews more like a woven and this pattern uses the sewing machine.  I like how it kind of looks like snakeskin.

Of course, I didn't remember to get a good shot of the shoulders, but the shoulder seam encases elastic which gathers it.  I used regular braided elastic, and after the fact felt I should have used clear elastic - my sleeve hem got pretty bulky: 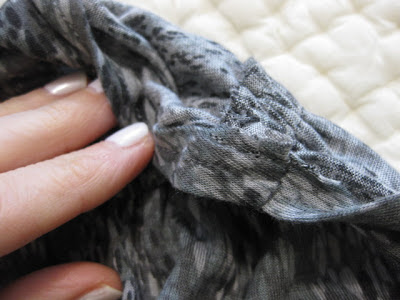 And I hemmed the darn thing with the sewing machine (see tedious, re: three machines, above).  I didn't even use a walking foot on any of this - that's how un-stretchy this fabric is!  I think I may have used a ball-point needle though.  I don't really remember now as it's been a week since I finished it! 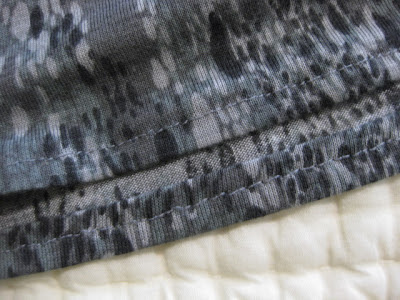 I was pretty grumpy about the dress after I finished it because I found it so frustrating to make.  But now that some time has passed, I think I really like it.  The fabric is very lightweight, but wearing a slip underneath takes care of any modesty issues.  I've actually started to think I'll do it again in one of my other colors of this fabric - is that too weird?  Multiples of the same dress only in different colors? 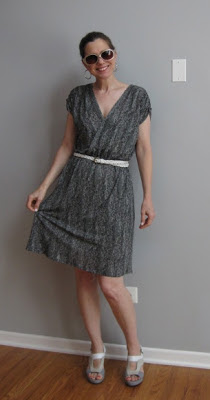 I have a belt that would look fantastic with this dress in the olive green . . .