For my second go-round sewing knits, I made a maxi dress.

Yes, you read that right.  A maxi dress.

I was hesitant for a quite a while to go down this road because 1) I'm short, 2) I'm not super slender and 3) I'm on the old side for this look.  But my BFF talked me into it; she thinks it's OK, and she's shorter and older than me!

And the maxi does have its benefits:  you don't have to shave your legs.

So on Thursday I made the dress, and let me tell you, for a garment with only 3 pattern pieces and 7 seams, it sure did give me a lot of trouble.  But I'm pretty happy with the outcome: 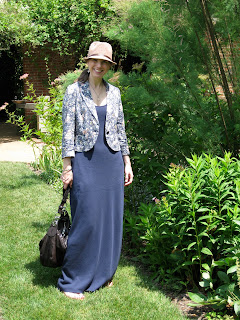 This is how I actually wore it today, with a little blazer, a hat and some flat sandals.  But I wanted you to see the actual tank part of it, so I took my blazer off: 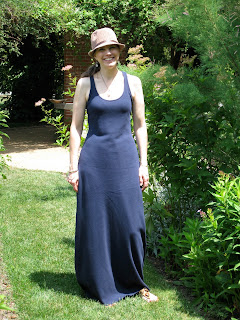 As Hubby took these pictures, he kept saying, "Pull your stomach in!"  Sadly, I already was before he even said that.

I have a lot to say about this dress, so let's dive right in!  If you don't sew, you might want to skip this part.  Or even if you do sew.

The pattern I used was the Mission Maxi by Jamie Christina.  This is the only pattern of hers I've used, so I don't feel like I can really comment on the quality of the pattern, since this is a pretty simple and straightforward garment.  The fabric I used was 100% organic cotton interlock knit from Fabric.com, and it was the source of most of my troubles, I've decided.

Remember how I said I ordered a bunch of knits without really knowing what they were, and my red polka dots ended up being a thinner fabric than I was expecting?  Well this one was quite a bit heavier than I was expecting, but I decided that might not be a bad thing for such a body-conscious garment.  And it was cheap, so I wasn't going to be too heartbroken if it didn't work out.

When I traced my pattern pieces, I followed the lines for the size 4 above the waist, and graded out to an 8 at my standard 10" hip drop.  My actual hip size according to the pattern envelope would have been more like a 12, but I measured the pieces at that 10" drop line on the size 8 and came up with 40".  My actual hip is 39", and I felt this dress should skim the body pretty closely, so I stuck with the size 8.  I think this was exactly the right adjustment for me.  The only other adjustment I might do in the future is to take a little bit off the straps so it's not quite so low-cut.

I decided that I'd try using my regular sewing machine for this one, and even went so far as to get out my ball-point needles and walking foot.  I did several seam samples before starting, and found that the "stretch stitch" on my Kenmore (which seams to be a triple stitch) does produce a firm yet stretchy stitch.  When used with the regular straight stitch foot, the top layer of fabric did end up being longer, but the walking foot elimated this problem.  Unfortunately, it also really aggravated me:  it's very clunky and loud.

I also learned that the walking foot really doesn't work if you don't have the fabric extending all the way to its edge.  I was trying to do a very narrow seam when I applied the binding to the neck and armholes, but the walking foot just wasn't letting me, so I ended up having to make those seams wider.

By the time I got to doing the side seams, I'd had about all I could take of the walking foot, so I did those on the serger.  SO much faster and easier, even taking into account that I re-threaded the left needle to black!

Disaster struck when I tried to fold the bindings to the back and topstitch them.  No matter what I tried (and I tried a lot:  stretch stitch, straight stitch, zigzag) the bindings were getting very stretched out and wavy.  Each time I tried something new, I tried it out first on a scrap; when it seemed like it would work, I tried it on my dress and got a wavy mess which I then had to pick out!  Finally the binding on the right armhole was so stretched out that I stopped sewing and threw the whole dress into the washer and dryer to get it back to its original shape.  A bonus was that it also shrunk about 3" in length, so I didn't have to cut any fabric off the bottom like I originally thought I'd have to.  (And yes, I did pre-wash and dry my fabric!)

After all that, I just wanted to finish the darn thing, so I hand-stitched the bindings to the back and washed my hands of the whole business. 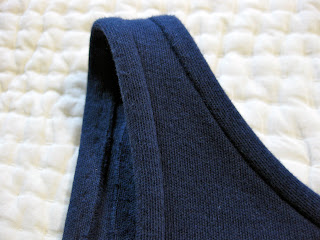 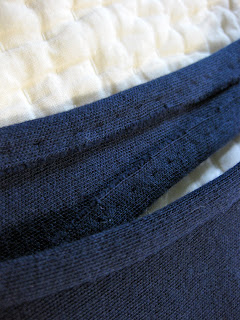 But I was really puzzled about why this happened, so I did some research and also whined about it to Alicia, and my conclusion (and hers) is that interlock is a difficult fabric to work with and behaves completely differently from jersey.

One of the little tidbits I learned in my quest for understanding is that interlock has a fair amount of horizontal stretch, but not much vertical stretch.  Well . . . I beg to differ on that one.  My dress that was exactly the right length so you could see my cute sandals continued to grow longer as we walked around the botanical garden today, until it was actually dragging on the ground!  I'll be very interested to see what happens in the second wash and dry cycle.

I have a second piece of this interlock, in kelly green, and I've already cut it into an identical dress.  My plan this time is to do the entire thing on the serger, attaching the bindings in the same way they're done on the Renfrew top.  So stay tuned for Episode 3 of: