The last of the vacation photos!

The other little side trip we made while we were in Germany was to Bad Reichenhall.  For that one, we got to ride a train!  Although only for about 20 minutes.  (I love riding trains!)  We rode through some really lovely countryside to get there:


My aunt lived in Bad Reichenhall for a while several years ago, so she took us all around.  And as she did, it got cloudier and cloudier. 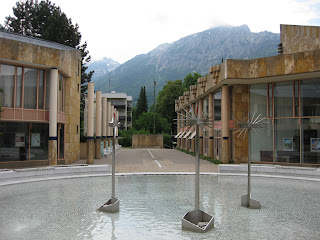 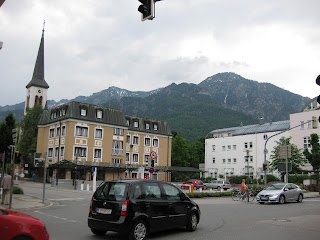 Bad Reichenhall is a spa town, where people would go to "take the cure" - and I guess maybe they still do.


There's a lengthy pedestrian main street, lined with shops and cafes.  We stopped for cake and coffee in the most famous of these, Reber.  We'd just finished our snack when it got very dark and started pouring!

We tried to wait it out, but it just wouldn't stop!  We ended up having to walk about a mile back to the train station in that rain.  Quite an adventure!

In other news, I did manage to do a fair amount of knitting while I was there.  I had taken along yarn to make my second Adrift, and managed to get it about 2/3 done! Here it is, back at home:

And I tried the Sally Hansen Polish Strips for the first time!  I had bought some specially for the trip because I didn't want to mess with carrying bottles of polish.  (I blame Karen D!)  So many of the reviews of these have said there's a pretty steep learning curve, but I found them really easy to use.  They claim to last ten days, and I bet they do.  But I got bored and took them off after four.  The only downside is that they aren't that easy to remove.

I'll definitely be taking these along on future trips!

So there you have it!  And trust me - that was the abbreviated version!  I took over 500 photos in 10 days.  Aren't digital cameras wonderful things?