Remember when I told you about working with Evelyn to edit her new knitting patterns?  Well, for the last week or so, we've been working on a new hat pattern, which went live as a free Ravelry download on Friday.  And in conjunction with its release, Evelyn started a charity knit-along, complete with its own Ravelry group!

After I joined, I invited some of you who are my friends on Ravelry to knit along with us.  If I didn't invite you, it's because after I did several invites I got bored and lazy, and decided just to send out a general invite via the blog!  Yes, I'm a little ashamed of myself!

This morning I started my first Miranda hat for the KAL.  I've been really excited about this because believe it or not, this is my first charity knitting experience.  I have to admit I'm a very selfish knitter and sewer - most of the time, if it's not for me, I just get bored with a project!  But this group is full of people I know via their blogs and Ravelry, and it's fun for me to do a project like this along with a great community of knitters.

So here are the beginnings of my hat: 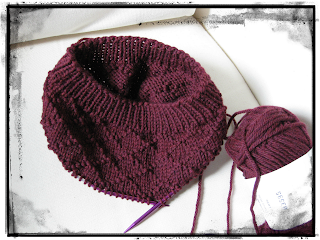 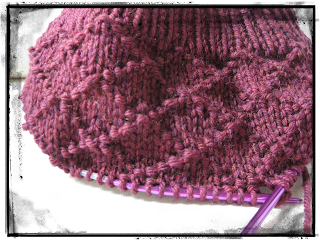 I'm using some Valley Yarns Northampton in the Claret Heather colorway, which I had left over from Hubby's Very Warm Hat.  This yarn is 100% wool, so it will be nice and toasty, but for future hats I'd like to use superwash or blends, so that the hats will be machine-washable.

If you'd like to join in with us, check us out at the links above, or read about the KAL on Evelyn's blog here.

Oh, and did I mention there are going to be prizes?!  There will be a drawing at the end of July, August and September for one prize each month.  July's prize is going to be a Box Bag which I will be making.  Prizes for August and September to be announced.  At the end of the KAL, a grand prize (also to be determined) will be awarded to the knitter who donates the most hats.  So get out those needles, folks!
Posted by Gail at 11:35 AM