Yesterday we went out with some friends for brunch, and I wore the new Museum Tunic (number 2) that I had made on Friday afternoon: 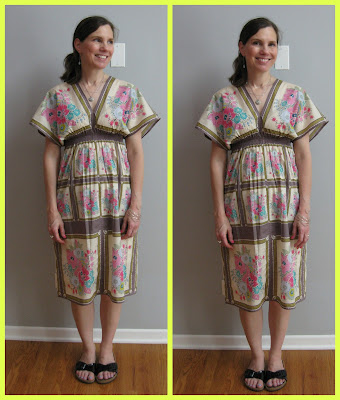 Remember when I made the first one, and said that the "dusky lavender" colorway of the fabric had been my first choice, but it was sold out?  Well, the very next day I got an email from Hawthorne Threads that it was back in stock, so I quickly ordered enough to make a second dress.

When I received it though, I was awfully disappointed.  First off, as I'm sure you've noticed by now, it's not lavender at all!  It's more of a deep taupe.  But the  most disappointing thing was that this one is not printed on Swiss dot like the yellow version.  I was complaining about it to Andrea after I got it, and she told me she'd heard that only the first run of this fabric (way back in 2009) got printed on Swiss dot, and after that ran out, reprints were done on voile.

It took me about a week to get over my disappointment and make the dress.  And it's OK.  I don't like it as much as the yellow version, but I don't hate it either.  And you have have noticed that there's plenty of room to expand in the tummy region of this dress, so it was a good one to wear to brunch!

I also wore a whole lot of other stuff I'd made.  I carried my phone and cash in my Vanilla Clutch (which gets a lot of use), and wore several pieces of jewelry I've made over the years.  I decided to share those too. 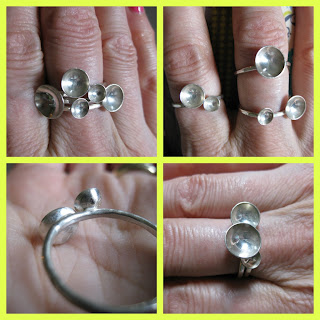 These are my Droplet Rings.  They're a set of three stacking rings with formed discs soldered on.  I really love these because they can be worn in many different combinations.  And you can't tell here because the light was dim when I took these pictures, but they're quite bright and shiny.

And from left to right are some simple earrings made from chain and blue chalcedony; a set of simple bangles made from silver wire formed into a circle and soldered closed - one of which has a couple of charms dangling off; and finally, one of my all-time favorite me-made pieces of jewelry, a PMC and CZ pendant.  I love this one because it has a very nice heft and is feminine and vintage looking.  I made it by making a mold from a vintage button, and then using that mold to form the clay.

I've said before that my day-to-day dress is pretty plain and unadorned, so it was nice to put on a bunch of pretty things and go out with friends, and even nicer knowing that I made most of them!
Posted by Gail at 8:28 AM