So, I did finish my Madeleine Skirt (except for the hem) on Sunday.  And it ain't pretty.  Well, actually, it's quite pretty, just not on my body.  And although it embarrasses me to say so, I'm going to admit that I've been in a pouty funk ever since.


My first thought was to toss it immediately into the Goodwill pile.  But I love this color; I spent some time on Saturday (pre-doom) mentally going through my closet and noting all the many blouses and sweaters I have that will go with it.  And after I had some time to simmer down, I started to think about ways I could fix it.

The main problem is that the fabric doesn't have as much drape as it should.  The pattern calls for medium weight fabric, and the sample is made in denim (although I'm not sure what weight of denim).  My fabric was listed as medium weight on Fabric.com, and I did pre-wash it.  But the enormous pockets are getting in the way of the skirt panels draping the way they want to.  And that's creating some unsightly buckling and making me look a lot heavier than I actually am. 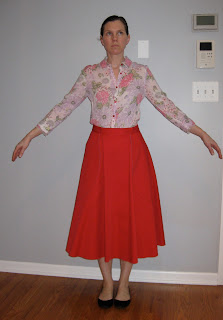 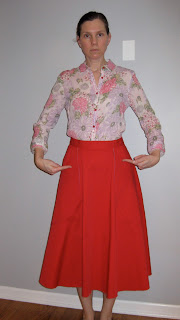 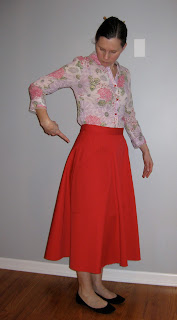 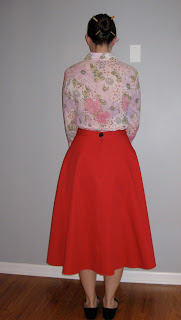 Maybe it's not as visible in these photos - the light has left us again.  When I see the photos, it doesn't look as terrible as I initially thought it was.  But I will say that there's a big difference between how it hangs with a slip and without.  (Better with.)  And I feel like I shouldn't have to wear a slip with a heavy skirt!  (Unless I'm wearing tights, which is a different matter altogether.) 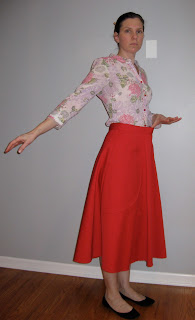 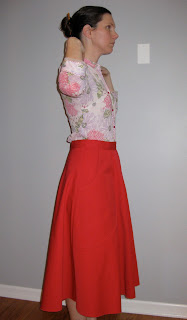 So how to fix it?  Taking off the pockets would probably fix the whole situation, but I don't think that's really an option:  remember all that groovy triple-stitching? Those pockets are on there good.

My second thought was to wash and dry it at warmer temperatures than I usually do, to see if I can shrink and soften it a little.  It's in the dryer now, so I'll know in a while if that works!

If it doesn't, it looks like I'll have to remove the waistband (also triple-stitched all the way around - gah!) and zipper and then take it in at the back seam.

I did have a little trouble with the instructions for the zipper and the waistband; somehow they just didn't make sense to me, so I did them the way I'm used to.  And my waistband also ended up being a couple inches too short - it was supposed to have a much longer underlap for the button.  But there's a good chance that one was due to user error.

Today I'm going to start a new project, which will be a muslin for a blouse on which I'll also try out the serger.  More on that another time!

Meanwhile, any other ideas out there for a fix?
Posted by Gail at 10:18 AM