I finally got around to finishing my first legwarmer yesterday.  I don't love it so much: 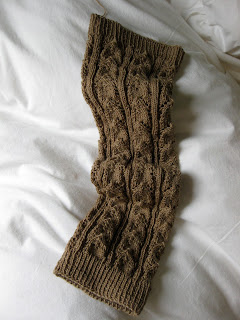 I'd been having a hard time making myself work on it because the winter was so mild that I didn't really need legwarmers.  But also, as I progressed past a few pattern repeats, I realized I wasn't so crazy about the lace pattern after all:


I do like the yarn though, so I'll be ripping this one out and using the yarn to make some socks.

It's probably all for the best.  I think I may be past legwarmer age . . .

In happier news,  Hubby and I went to Michigan over the weekend to see my cousin in a play, and I wore my new Still Light dress.  I know a few people were interested, so I wanted to report that I experienced no bagging in the seat (or anywhere else, for that matter) after 12+ hours of wear, at least three quarters of which were sitting down!  Definitely a winner!
Posted by Gail at 3:52 PM