Incredible!  Hubby ordered my serger Saturday afternoon, and it arrived this morning at 10:30 - two days ahead of the estimated arrival!  I had to wait until the afternoon to take pictures though, because my camera had run out of battery.

I know some of you are interested in purchasing a serger, and in this machine specifically, so I've taken lots of pictures to show you what you can expect if you buy this one.

I got the Brother 1034D.  We ordered it from Amazon, and the list price is $199, which includes free shipping - pretty sweet deal, in my opinion.  I actually got the bundle which includes two books on serging, for a total of $220; but now that I've got the serger with its manuals and DVDs, I'm wondering if the books will be overkill.  Because guess what?  It's not that hard!

The machine comes pre-threaded, and all the threads are color coded.  So the first thing I did was take a good look at the paths the threads take.  It's very easy to follow, because the machine itself has pictures and numbers showing the threading paths.

Included with the machine you get lots of goodies:

It honestly took me longer to watch the DVD (I only watched the instructional one) than it did to unthread and rethread the machine, and I had to do it twice because one of the threads got caught on something the first time.  The instructions on the DVD are very clear,  made up of about ten mini movies ranging from 2 to 15 minutes each.  When I inserted the disk into my computer and opened it, the topics were in random order, so it took me a while to figure out which order to watch them in.   That was another reason it took me a while to watch it!  But the information given is solid.
Once I'd learned about the threading sequence, I took another good look at what was already in the machine:
Then turned it on and tried it out, and immediately broke one of the looper threads! That's a good thing though - it forced me to rethread the machine on my own, and truly, it's no big deal!  It really makes sense.
Then I went upstairs and got some scrap fabric, and did my very first rows of stitching:
I'm inordinately proud of myself! 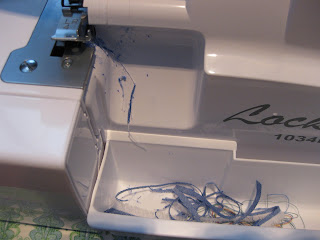