Thanks again to everyone who left comments and suggestions on my skirt yesterday. I really do appreciate the input!

I spent most of yesterday working on a muslin for the Lisette Market Blouse (the short sleeved one).  After I cut out the fabric, I serged all the way around each piece.  Way fun!  I don't know if that's the approved way to do things, but I think it's pretty darn cool to have all the seams finished before I even start to sew the blouse! And while I had the serger going, I serged the hem of the skirt too.  So now I'll just have to do a little gathering and press it back, then sew it down.  Fingers crossed!


So even though my birthday isn't until Sunday, I've managed to acquire some loot! Last Saturday, I received a package from my mom.  I was going to save it to open on my birthday, but I really needed a pick-me-up on Monday, so I tore in.  Look what she sent me: 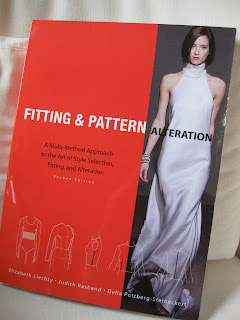 Fitting and Pattern Alteration - it looks like this is going to be an invaluable resource.  I was really blown away.  My mom is the best (for a whole lot of reasons)! Thanks,  Mom!

Then yesterday while I was serging away, my mail lady rang my bell.  She had two treats for me.  First up was the giveaway I won last week from Melizza at Pincushion Treats - two goodies!  First off, an adorable pincushion that she made herself: 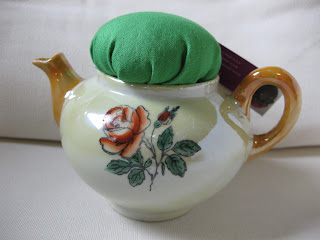 I love it that she roams around London (one of my favorite cities in the world!) looking for sweet little bits and bobs to make her pincushions.  I feel honored to own this treasure!  And as if this wasn't enough, she also included a belt buckle she picked up at Liberty of London! 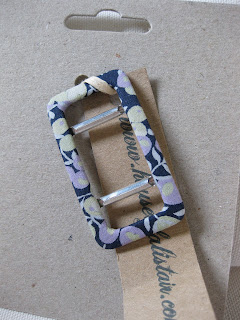 I have big plans for this little buckle, which I'll elaborate on another time.  Thanks, Melizza!

The other treat I got in the mail yesterday was a handmade card and some goodies from my lovely friend Andrea at Stitch Parade: 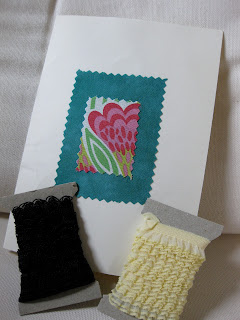 If you read Andrea's blog, then you know she made her own undies after taking a class a few weeks ago.  She sent me some of the very same stretch lace she used!

So now of course, I'm going to have to try my hand at making undies too!  Thanks again, Andrea - I'm so touched by your gift!

A little later in the afternoon, I was taking the garbage out and I heard the UPS truck.  The rest of my "serger bundle" arrived.  After flipping through the books, I'm glad I got them: 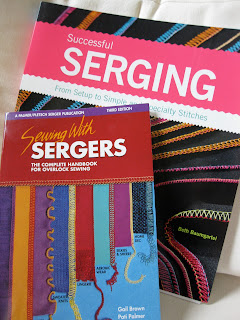 They have lots of tips and creative ideas for using the machine.  Which, by the way, I've decided to name Sergio.  My sewing machine is a Kenmore, and it never had a name before, but now that I've named the serger, I'm going to call the sewing machine Ken.

Ken and Sergio.  I loves them.