So, the day after my first post about my 1958 sweater, I decided I wasn't happy with the way things were going and ripped it all out and started again.  I had only done 4" on the back, so it wasn't too heartbreaking.

While I was getting gauge with the 3.25 mm needle, that gauge was based on the rib fabric being opened out a little.  As I was working, I decided that I really liked the look of the fabric better when it's allowed to pull in.  So I restarted with a 3.5 mm needle (US 4) and, because I wanted the fit to be slouchy, went up from the size 12 (34" bust) to the size 14 (36" bust).  And now things are moving along nicely. 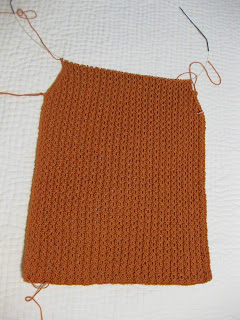 Yesterday I completed the armhole shaping, which is a really interesting one - done almost like a raglan, but just for a couple inches, after which the rest of the armhole depth is knit straight.  The number of decreases and the way in which they're done leave a line of rib almost like a full-fashioning.  At first I wasn't sure if I liked it and was thinking about doing the armhole in a way that would avoid this, but then I decided it would be more of an authentic vintage adventure to knit the pattern as written.  Here's how the shaping looks up close: 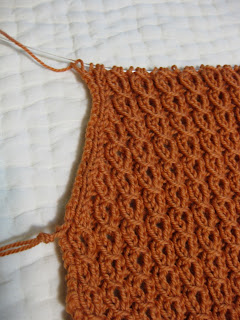 I'm really having fun with this stitch pattern.  One of the things I like about it is that two repeats equals one vertical inch, so it's really easy to count your length without getting out the measuring tape!

It would seem that the designer really loved this texture too - I've found a few other sweaters in two different magazines that use it.  I'm especially in love with these two patterns:

The cardigan is from a magazine I acquired recently - Bernat no. 84 from 1960 - like the Bernat no. 65, patterns designed by "Mirsa of Italy."  I just love how the texture of the pattern stitch interplays with the stripe pattern.  Not to mention the wide collar and inset pockets!  This one may be in my future!

Here's the cover of this magazine: 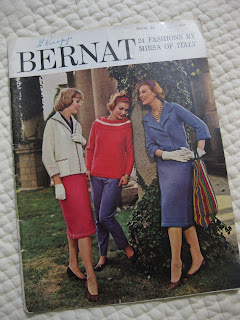 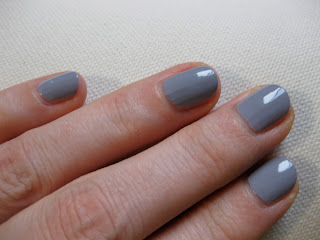 Essie Cocktail Bling - which is so similar to Bangle Jangle that I'm wishing I hadn't bought both.
Posted by Gail at 11:03 AM