Something new . . . something blue

I made a new pattern!  Will wonders never cease?!  Of course, there's a backstory.  You know me:  I have to over-explain.  It's a compulsion, I tell you!

So for a long while I'd been thinking that I'd like to make a tee shirt dress based on a mash-up of the Renfrew top and the Hollyburn skirt.  Of course, I never got around to it . . . and then I discovered that Dixie DIY had already made a pattern for just the dress I wanted!

As I read through the finished projects though, I realized that I'd have to do a fair bit of redrafting to get the look I wanted.  Many people noted that the waistline was quite high, the skirt quite short, and the sleeves quite wide.  Knowing I'd have to actually do some work made me procrastinate about buying the pattern.  But then Dixie posted last week that she had revised the pattern to correct all those issues!  Bingo!  Into the cart it went!

And Dixie's Ballet Dress is a really great pattern.  I took the time to do flat pattern measurements and they are spot on with the measurements listed in the instructions.  The entire download is only 20 pages, two of which are instructions - so, less than a lot of PDF patterns.  I found it quick and easy to put together.  The only thing I felt was missing was yardage information on the sale page - I had a specific stash fabric I wanted to use, and would have appreciated knowing in advance whether it was enough.   I read somewhere that if you purchase the pattern through Etsy, you get an instant download, whereas if you use one of the other options, you'll have the pattern emailed to you.  Of course, I bought mine through Etsy - who wants to wait?  And it was $4 well spent!

Dixie's instructions have you make up the bodice and then sew up the sleeve seams and set in the sleeves, but I decided to attach the sleeves flat like I'm used to doing with the Renfrew, and it worked just fine.  One thing that surprised me was that the piece for the neck binding seemed quite short compared to what I've been used to, and I did have to really stretch it while attaching it to the neck opening.  But it gave me a nice neckline that lays very flat - I didn't even topstitch it!

Another thing that was new for me was adding in clear elastic at the waist seam - unstretched, just to give some stability there.  It felt awkward to me doing this on my serger, but I can see how the elastic will really help support the weight of the skirt.

So, the finished dress?  Here it is from the front and back (and yes, I think I'm just about ready to admit that I need a small swayback adjustment): 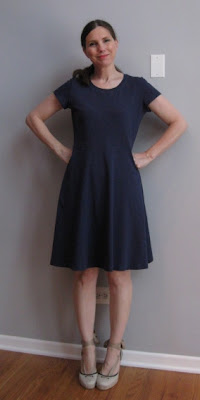 Obviously, I shortened the sleeves.  I had intended to do the 3/4 length sleeves as written, but as I was ironing my fabric, I found yet another little hole in a very inconvenient spot.  Because of it, I really had to get tricky with my fabric layout - all the large pieces of this dress are on the fold, and my hole was about 2" in from the fold.  So that only left me enough spare fabric for short sleeves, which in the end is a good thing I think.  I'll certainly be wearing this over the summer.  I cut my sleeves off 2" below the armhole, and then turned 1" back for the hem.

After I finished the dress, my first reaction was "meh."  But that reaction has nothing to do with Dixie's pattern, which is fantastic!  Rather, it stems from not being crazy about this cotton/lycra jersey and also from my inability to decide just what kind of fit I want.  When I was choosing which size to do, I decided that I didn't want anything too tight or constricting, so I started with a S at the bust and graded out to a M at the waist (and used the M skirt).  But then when I put on my finished dress, I felt like it was too loose, despite being exactly the size I thought I'd wanted only hours before.  I'm a fickle creature, I tell you.

So I started playing around with different stylings of the dress, and the more I played with it, the more I liked it.  First, I added a narrow silk scarf at the waist with matching (!) ballet flats from J. Crew:

Cute!  Then I decided to go all nautical - times two!  Here's the first nautical outfit - a red French terry hoodie from Anthropologie and metallic glazed linen espadrilles from J. Crew.  I've turned around too so you can see the cute bow on the back of the hoodie:

And here's another red nautical-inspired sweater from Anthropologie, along with a red, white and blue ribbon hat from San Diego Hat Company (which I bought the first time I visited SF in 2003!) and those same navy Corsage Sandals from Boden that seem to go with everything:

I could have gone on and on - I didn't even get to making outfits with kelly green!  But I took these photos on Friday afternoon, and started to run late for getting to the concert!

So I will definitely be making this again.  I've already got some navy blue with white polka dots lined up for version 2.  And this time I think I'll go a tiny bit smaller.  One thing I forgot to mention is that the pattern includes 1/4" seam allowances, but I added on another 1/4" so I'd have plenty to cut away on the serger - I find it easier to stay even that way.  So I'm considering using these same pattern pieces rather than retracing, and just taking a bigger seam allowance.

Have any of you guys made this pattern?  Have you purchased it?  Dixie says that if you bought the earlier version,  you can email her to get a copy of the update.
Posted by Gail at 8:07 AM