It's been about a week and a half since I made this skirt - I actually made it on the same day I got my coverstitch machine - but I just wore it for the first time on Friday to go have coffee with Alicia.

I'd been thinking I'd skip the whole chevron trend, but when Girl Charlee stocked a larger format chevron than what they'd had previously, I just couldn't resist.  I used the tutorial over at Mad Mim to draft a maxi to my measurements, and I think the sizing worked out really well.  She has two versions, an A-line maxi and a gathered maxi; I did the A-line.


You do have to read through the entire tutorial to get all the information; the suggested yardage was listed in the comments rather in the tutorial and for me it was insufficient.  I had bought 2 yards of this fabric because you can only buy in full yard increments from Girl Charlee.  The tutorial suggested 1.5 yards of 55" wide fabric for the A-line skirt.  Even with 2 yards of this 58" fabric, I had to cut these out opposite from each other, i.e. the wide (hem) ends of the skirt were in opposite cormers of the piece, which was laid out single layer.  With this fabric it worked out OK, but with a directional print, I'd think you'd need a good half yard more, if not a yard.

Still, I'm happy with the outcome.  I like how swishy it is.  The knit maxi dresses I've made are more columnar than this skirt, so it feels a little more flouncy.  The tutorial recommends adding 8 - 10 inches to your quarter hip measurement to get the hem width.  I wasn't really sure how wide I wanted my hem to be, so I added the 8" and I think it's just right.


I ordered the fabric specifically to try out this "pattern" and was a tiny bit disappointed when it came in the mail because it felt a little thin.  But after the prewash it felt somewhat heftier so I decided to try it out.  It's probably a bit thinner than is ideal, but of course I'm wearing a slip underneath so I don't think it really matters.

As I mentioned, I wore it out to have coffee with my friend Alicia and one of the first things I did was to spill coffee on it!  Also, the skirt seemed to grow in length as the morning wore on.  When I got home I put it in the washer and dryer - next time I wear it I'll see if it shrunk or if I need to redo the hem.

And speaking of the hem - I got everything ready to the point of hemming on the day my coverstitch machine was to be delivered.  So once I had it out of the box and had tested it on some scraps I was able to finish off the bottom! 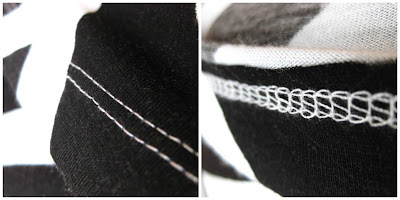 The machine I got is the Brother 2340CV.  My serger is a Brother 1034D, and this coverstitch machine is set up in a very similar way, so it was easy to figure out.  I've used it on 4 projects already and while it's a little early to give a comprehensive review, I'm really liking it so far.

One thing that surprised me is that there's no tying off or knotting.  The manual recommends ending your stitching by overlapping with the beginning of the hem (or whatever you're working on) by an inch and a half.  That is going to take some practice!


Oh, and there's a Hubby-ism with this story.  When I put on the skirt, he said, "I like it.  But why didn't you do pattern-matching at the side seams?"  Part of me was proud that he even knew that that's a thing, but another part of me felt like Grrrrr!  Funny Hubby!


I can tell you though, I've seen a few variations of this skirt online, and my pattern matching is better than those!
Posted by Gail at 7:00 AM

Email ThisBlogThis!Share to TwitterShare to FacebookShare to Pinterest
Labels: sewing