Here is the item I made just before going to SF - yet another Mission Maxi.

This one is made from a fake batik-print jersey I bought from Girl Charlee at the end of last summer.  My original intention was to make a Kimono Dress with it, but something kept holding me back - it just never felt quite right.   Finally I decided that I'd like it better as the maxi. 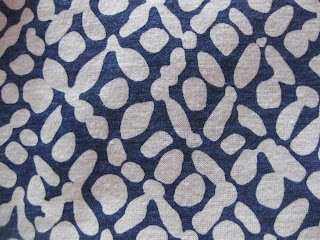 I've made this so many times, there's not much to say about it - except that I've decided from here on out, I'm going to do the bindings the way they're done on the Renfrew neckline.  As drafted, these bindings are narrow, so you're instructed to sew them to the opening, then turn to the inside and topstitch down.  I can never seem to get my topstitching to be stretchy enough though, and the armholes end up being constricting.  This time I used the "lightning bolt" stitch in hopes that it would help, but it's just as constricting as all my other ones.  So from now on, I'll make a wider binding piece, then fold it in half lengthwise before applying both layers to the neck and arm openings.  I think it will be much more comfortable to wear, and it will also give me a little extra width to hide those bra straps.

I'm still using the pattern I traced out a year ago - my adjustment is a size 4 at the bust and down to the waist, grading out to size 8 at the hips, to give me a body-skimming silhouette.

I wore this out to dinner and then a jazz concert last night.  When I met Hubby at the restaurant, the first thing he said was, "You look pretty."  Awwww!  He hadn't seen the dress yet, so I was glad to get a thumbs up.

It was chilly, so I added on this old, old blazer from Old Navy:

And then a very soft scarf my sister-in-law bought me in Turkey a few years ago:

And my new clogs!

Which I admit are hard to see because they're almost the same color as my skin!

Because I was wearing a longer blazer, and because we were going out for sushi, I made the bold decision not to wear any shapewear, but I am wearing a half slip.   Made it much more comfortable to sit through the concert - those seats at the symphony hall are the worst!

I've got two more new things to show you in the next couple days - and one of them is a pattern I've never made before!  Imagine that!